Wellsboro: The Town That Saved Christmas

(Editor’s Note: This article was published in 2018. In 2019, the 36th annual Dickens of a Christmas festival will be held December 7 – December 9 and Christmas on Main Street will take place December 13 – December 15.)

In the pre-dawn hours of Friday, September 1, 1939, Adolph Hitler’s forces invaded Poland and suddenly the ominous war rumblings from Germany became real as World War Two was underway in Europe. A half a world away, the United States had yet to engage in the battle, but major retailers gearing up for Christmas were soon to begin fighting a battle of their own.

The war-time British blockade of imported goods from Europe included German manufactured glass Christmas ornaments popular in the United States. German immigrant and ornament factory owner Max Eckardt, from his offices in New York City, was directing U.S. sales and distribution of his German-made ornaments, supplying all F.W. Woolworth stores and others.

With Christmas coming and the British blockade firmly in place, Eckardt was concerned as to how he could ever meet the expected U.S. demand for more than 250 million ornaments.

Max Eckardt had to think fast – and work faster! His mission was to find a producer on American soil to meet the demand. Huddling with F.W. Woolworth Company executives, they decided to call on Corning Glass’s world headquarters. Eckardt and Woolworth’s walked out of the meeting with a deal for Corning to begin full-scale production of ornaments called “Shiny Brites.” 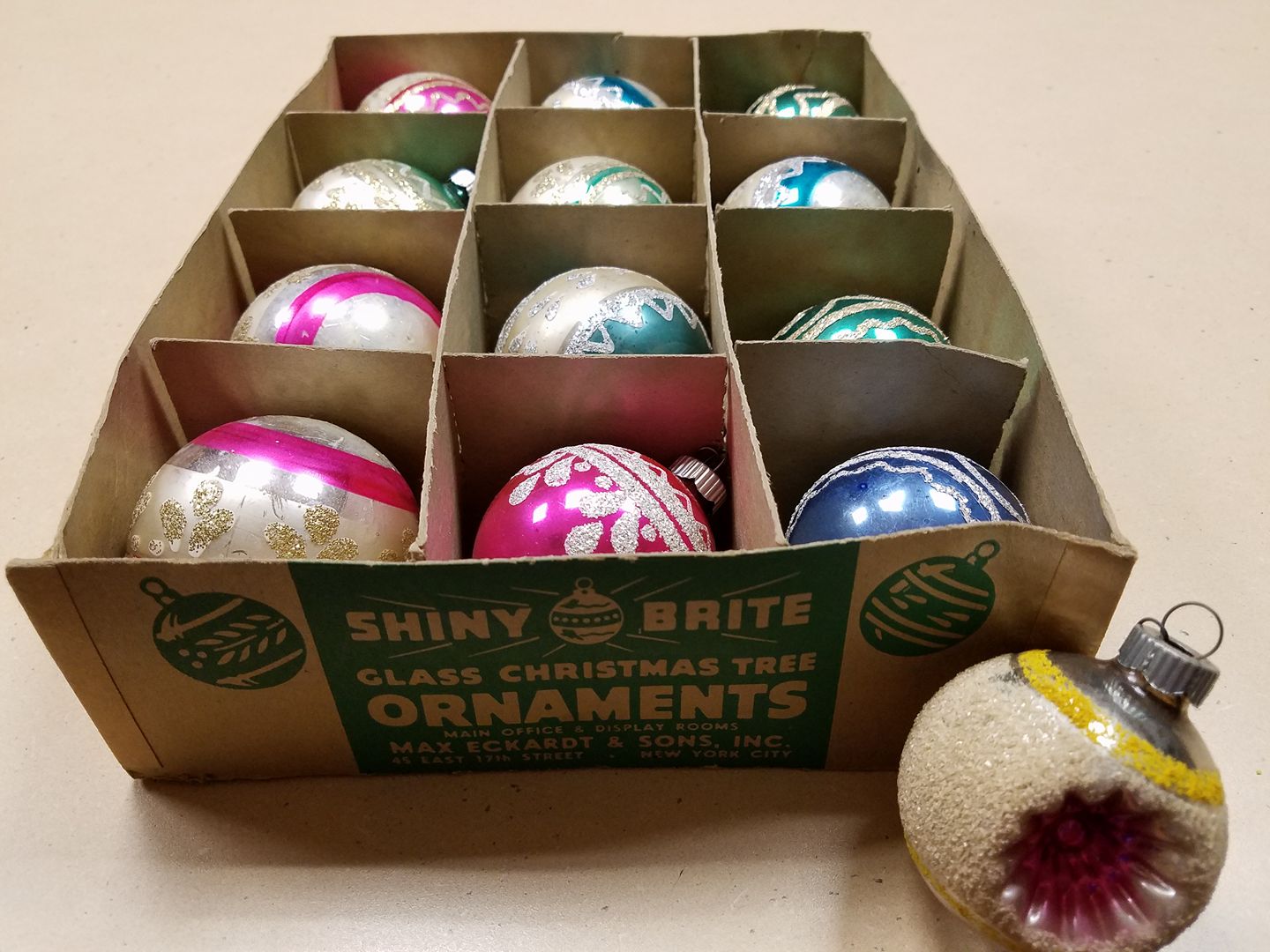 Wellsboro’s Corning glass plant, located in the Pine Creek Valley & PA Grand Canyon Landscape of the PA Wilds and fewer than 50 miles from Corning’s headquarters, was assigned the job of retrofitting its glass bulb operations to manufacture Eckardt’s Shiny Brites. This was a perfect fit because the Wellsboro plant had high-speed-ribbon machine technology that could be converted to mass-produce ornament bulbs.

It was also a war-time coup for Eckardt in several ways. Not only did he have a United States manufacturing base for his ornaments, but during war-time, he could boast that they were “Made in America.” He took it a step further by designing Shiny Brite ornament boxes with a likeness of Santa Claus shaking hands with Uncle Sam.

In 1940 alone, Wellsboro’s Corning employees turned out more than 40 million Shiny Brite ornaments, supplying them to stores all over the United States. The Shiny Brite manufacturing tradition continued in Wellsboro for several decades and Wellsboro took great pride in its notoriety as “The Town That Saved Christmas.”

In Wellsboro’s Penn Wells Hotel and Lodge lobby there is an American flag created from the Shiny Brite Christmas bulbs that was gifted to the Penn Wells by the Corning Corporation.

“Featuring the Shiny Brite ornaments grew out of the planning for our second Christmas on Main Street weekend,” said Shawn Bryant of the Penn Wells Hotel and Lodge. 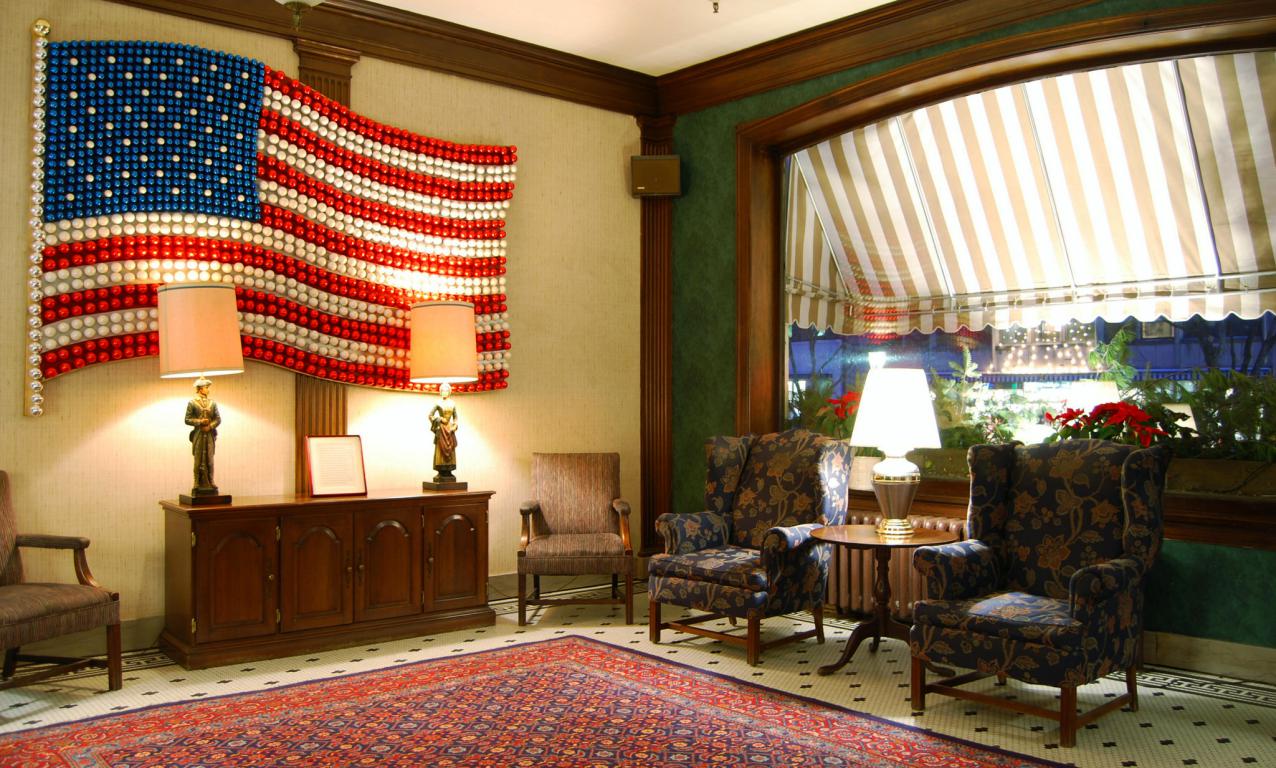 “Bringing out those ornaments and our pride in the local craftsmanship seemed a natural way to preserve and display a piece of this community’s heritage. Last year we collected and displayed a number of the ornaments and provided the story behind them and we are in the process now of preserving the stories of the actual craftspeople who made that history,” said Shawn.

This rich history is celebrated fittingly in Wellsboro in December with two major events on back-to-back weekends: Dickens of a Christmas and Christmas on Main Street.

The first full weekend of December kicks off the annual Dickens of a Christmas festival, sponsored by the Wellsboro Area Chamber of Commerce, which brings more than 20,000 people to Wellsboro for a weekend to rekindle the old-fashioned Christmas spirit.  Wellsboro’s Main Street becomes an early Victorian marketplace featuring all types of food and drink, as well as great gift items.

“Wellsboro certainly has a special glow during the holiday season,” said Julie VanNess, Executive Director of the Wellsboro Area Chamber of Commerce. “I love to see the Christmas Trees on the boulevards with the gaslights and a dusting of snow.”

Julie said the Chamber does everything from street closures to locating vendors. “But what makes the Dickens event spectacular is what we don’t do, such as the entertainment, street performances, quartets, choirs, characters, and so much more, which are the result of community members coming together in the spirit of the event, doing what they love, and they truly are the ones who make Dickens of a Christmas special,” explained Julie. 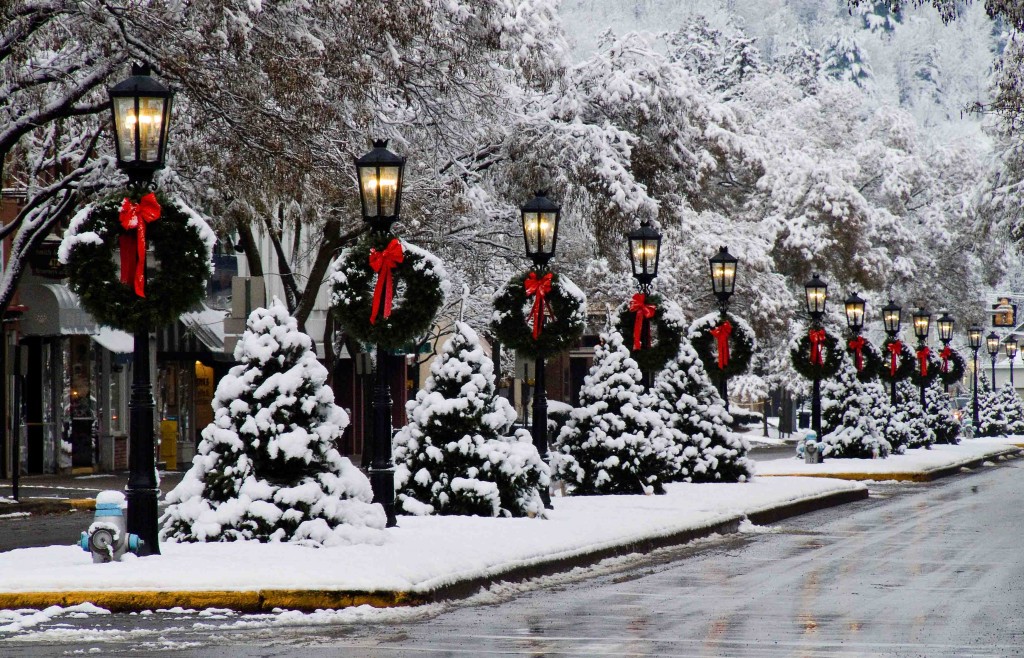 She adds that holiday events are a huge plus for the merchants and local economy, “The Wellsboro area sees a significant economic impact from Dickens of a Christmas. The surrounding area’s lodging and restaurants are impacted as well,” said Julie. “The event comes together amazingly quickly due to the community coming together and everyone doing their part.”

The Holiday happenings continue the following weekend as “The Town that Saved Christmas” celebrates “Christmas on Main Street,” where those famous Shiny Brite displays are featured in businesses all around town. There are 24 displays of the historic Wellsboro-made ornaments from the early 1940s, as well as holiday shopping, live music, demonstrations and other events throughout the weekend. 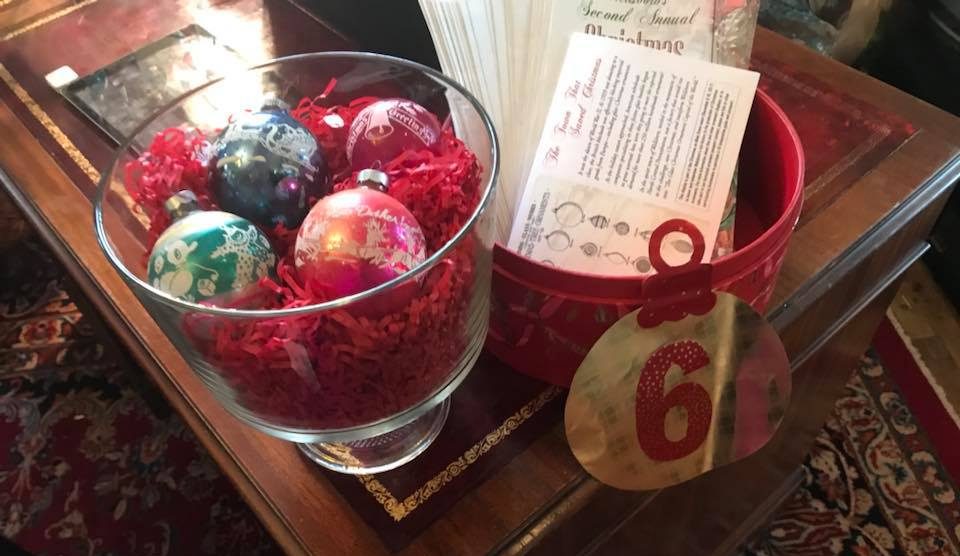 Billed as “a weekend of activities to warm your heart and fill you with Christmas spirit,” you can stroll along Wellsboro’s gas lit Main Street, ride the Trolley and enjoy the picturesque town.

“We have been so happy with how Christmas on Main Street has grown in just two short years and are looking forward to year three in December,” said Penn Wells’ Shawn Bryant. “How we grow in years to come will depend on the response we get to the many new events and activities we have added for year three,” he explained. “With a vibrant downtown, beautiful gas lights, decorations and historic district, Wellsboro is a perfect setting for a Christmas time village, and this event highlights it all.”

(Photos for this article were provided by the Penn Wells Hotel & Lodge and the Wellsboro Area Chamber of Commerce.)

21 thoughts on “Wellsboro: The Town That Saved Christmas”