Ted Daeschler and Neil Schubin were paleontologists. They were surveying an area on the north side of the Bucktail Scenic Byway for fossils. They found one, right there within the West Branch Susquehanna greenway. In fact, they found much more than they’d bargained for.

They found a previously unknown fossil. The first of its kind ever discovered.

The fossil has been dated at approximately 365 million years old, and the organism is said to have lived during the late Devonian Period. They found the fossil of a shoulder girdle belonging to some creature with strong legs, and continued digging.

Note that the process is not like the movies show it, where they immediately grab the fossil out of the ground and proceed to be chased by Nazis or Tyrannosaurs or whatever. Actual archaeology is long, painstaking work, carefully revealing the discovery with tiny spoons and brushes, taking time to make notes, draw the discovery, photograph it, and document everything.

The creature turned out to be a tetrapod, a primitive four-limbed vertebrate that has been described for the layman as “Fish with fingers.” They named the creature Hynerpeton, which roughly translates to “creeping animal who lived at Hyner.” The scientific classification is H. Bassetti, named after city planner Edward Bassett, Daeschler’s grandfather.

(At right: Artist rendering of a tetrapod provided by the Ross Library.) 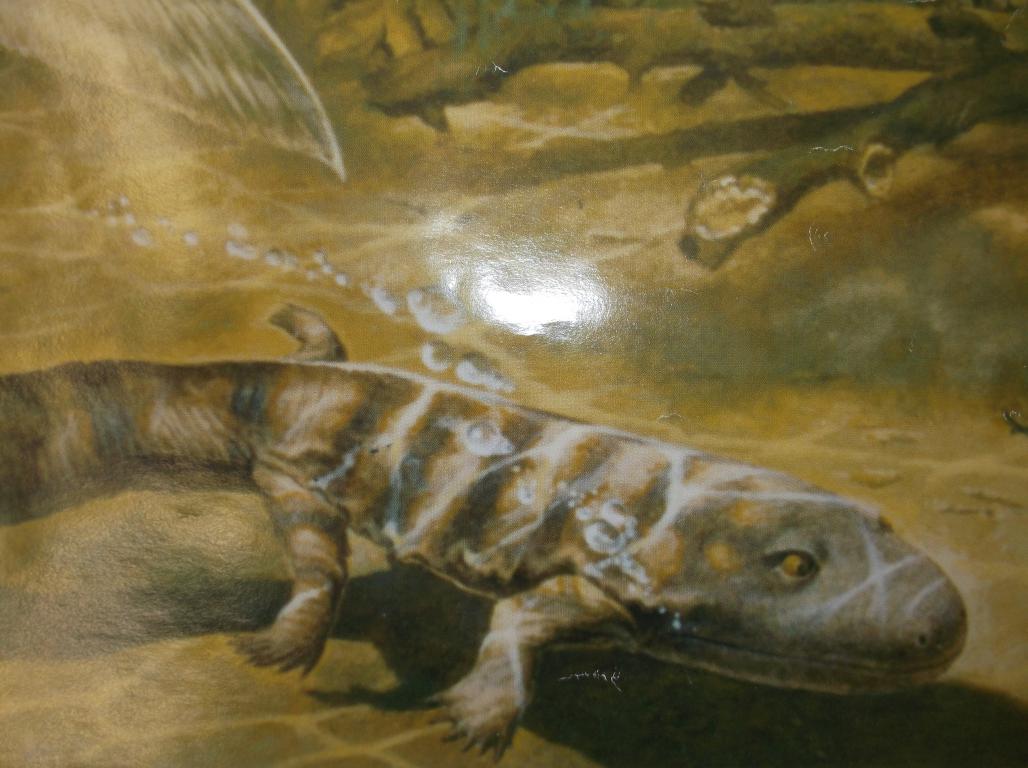 Physically, the creature was described as looking something like a large salamander or water lizard, with fins that had protruding fingers coming from them. This is something of an estimate, developed through extrapolation from the available fossils.

Today there is a small museum dedicated to this event. It exists in North Bend, Chapman Township, very near Route 120. It’s a good place to visit if you have an interest, and it can be seen easily while you’re on the Bucktail Scenic Byway, visiting Hyner View State Park, in town for the Flaming Foliage Festival, or even looking for the ghostly Swamp Angel haunting the location. The site is in Elk Country, but very near the Dark Skies Landscape. 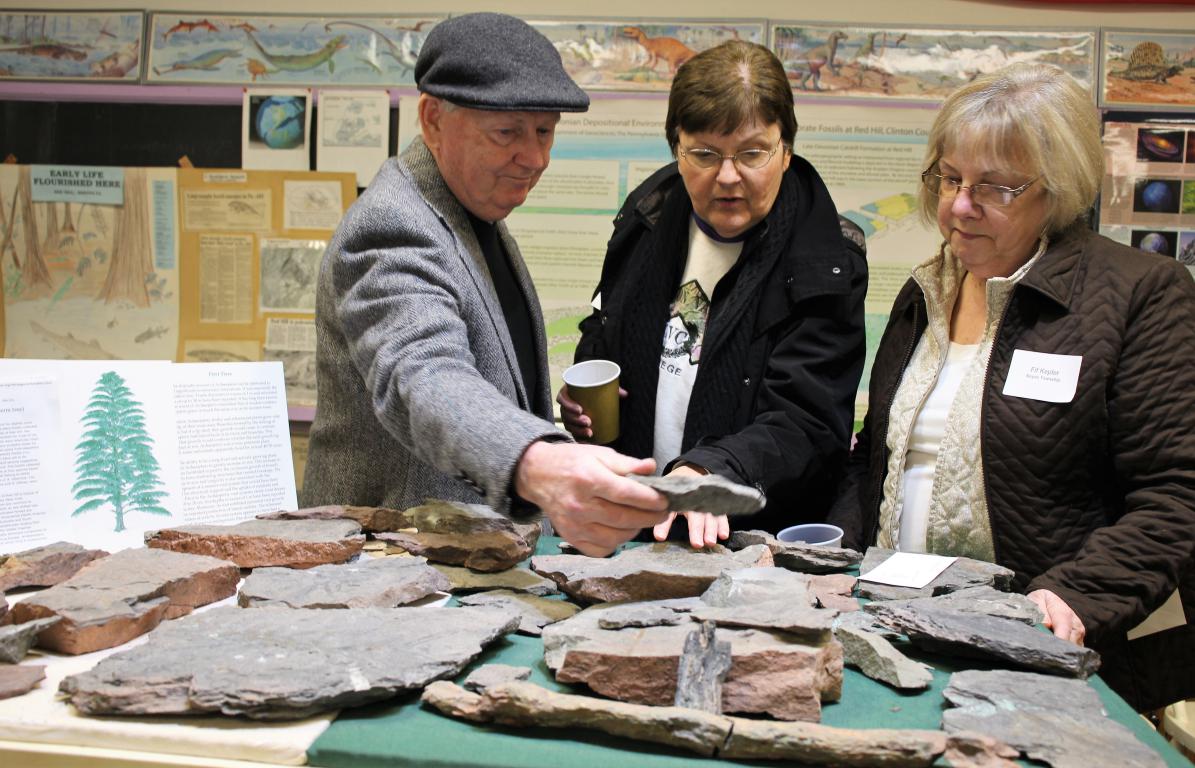 (Above: People gather at the Red Hill Fossil Museum to see and learn about the many fossils found at Red Hill. Bottom photo – Doug Rowe, left, talks to two women about the special fossils. Photos provided by the Clinton County Visitors Bureau.)

The museum, classified as a “natural history museum,” is on the second floor of a township building at 196 Main Street in North Bend. Tours of the building can be arranged by appointment, and visitors can participate in the archaeological dig, with instruction and under supervision. For information or to schedule a tour, contact Doug Rowe at 570-923-2044. 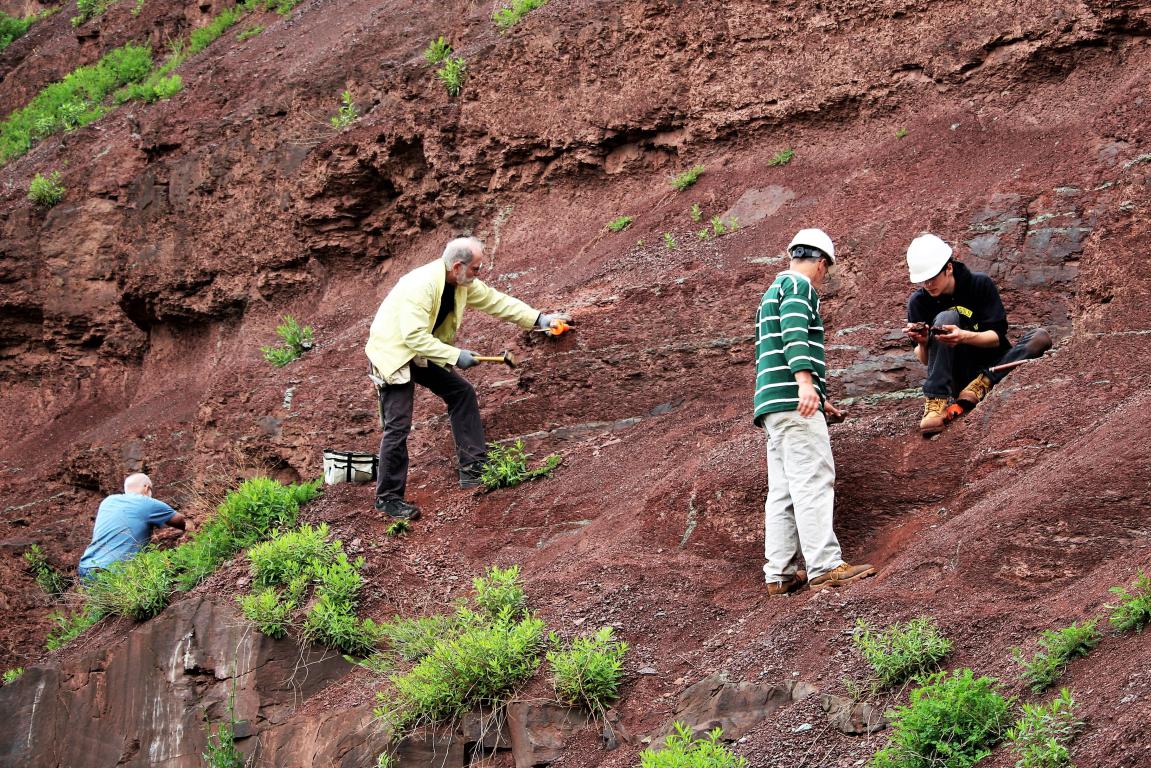 Hynerpeton is something special. It’s said to be one of the earliest known tetrapods discovered, and the first one discovered in North American outside of Greenland. That alone would make the site worth a visit.

Nestled in North Bend lies a fascinating place. It’s enjoyable and educational, and you can take a trip there that was millions of years in the making.