In the days when Warren County was young, legends of witches were plentiful. In 1800, Warren County was created from parts of Allegheny and Lycoming Counties, and it was largely unsettled and wild at the time. In the wilderness, stories and rumors of witchcraft were often repeated.

“Belief in witches was not difficult to find when the dark, mysterious forests covered most of the hills and valleys; the denser pines admitting only a pale, greenish half-light on the brightest day,” wrote Arch Bristow in his book “Old Time Tales of Warren County.”

Bristow talks about the stories of witches, people who claimed to have seen them riding their broomsticks against the full moon, witches who would slither down the chimney of the local cabins to put an evil hex on the settlers. Sometimes witches were said to have put out the fires burning in the cabins’ stoves, a serious matter in the dead of winter. Or they were blamed for the family cow not producing milk. 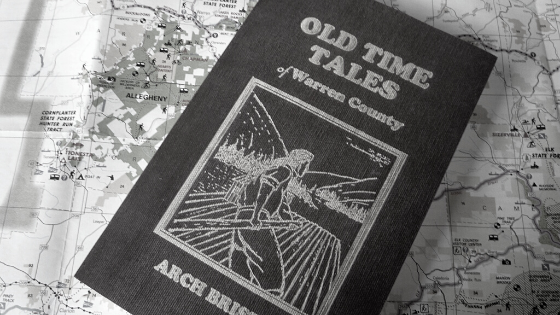 But where there are witches, there is often someone to battle them. Elk Country had Loop Hill Ike, and Allegheny National Forest and Surrounds had John Myers, the witch killer.

John Myers was said to live near West Spring Creek, a bit south of present day Scenic Route 6. He was reputed to be a tough guy, a hardy settler of the woods, and to have a certain magical skill that enabled him to help with various witch problems. “He not only drove the witches out, but killed ‘em dead,” wrote Bristow.

If one of the locals felt that they were being persecuted by a witch, they’d go to Myers and request his help. Myers had something of a process for this, but first people had to pay his fees. He worked on a kind of sliding scale, sometimes charging fifty cents, sometimes accepting a farm animal or a musical instrument in payment for his services.

Once the issue of payment was settled, Myers went to work. He would pin a large sheet of paper to the wall and have the victim stand in front of it. Then by candlelight, he would trace their outline on the paper and cut the outline with scissors. After that, he would take it outside, pin it to a piece of pine wood, and shoot it with a silver bullet.

This was said to kill the witch, “dead as a nail,” as Bristow put it. Once he was finished, he would take a pocket knife and dig the silver bullet out of the wood, because John Myers was also economical. He was said to use a very small gunpowder charge to load the silver bullet, to make it easier to find afterward, and because it doesn’t take much of a charge to shoot through paper.

John Myers was said to have died sometime around 1821, still in Warren County. Now, I’ve done some checking, and there doesn’t seem to be any record of that: no obituaries, no wills, and no marked grave of John Myers in the area with the correct date. This could mean that Myers was just a legend, his stories arising from the time. Or it could mean that he didn’t leave much of a record behind.

Or maybe, it means that he never died at all. Maybe he’s still out there, protecting Warren County from witches. I’ve heard weirder stories, and with a guy like that, you never know.