Cryptids are pretty popular. Everyone knows the big ones: Bigfoot, the Loch Ness Monster, the Yeti. Those are the ones everybody can name. But in addition to those, there are plenty of other smaller, more local cryptids that people aren’t aware of.

There’s the Giwoggle of Clinton County, a sort of wolf-bird-horse hybrid that’s said to lurk in the Elk Country Landscape. Also in Clinton County, but closer to the I-80 Frontier, the Susquehanna Seal makes appearances in the river. Clarion County once had the Clarion What-Is-It, a weird creature spotted in the Cook Forest area. And Potter County had a creature that was sighted by hunters, way back in 1897. It was reported in the Potter Enterprise, which gave the creature its name: The Potter Nondescript.

The first report hit the newspapers on April 21, 1897. A fisherman up in Nelson Run, in the present-day Dark Skies Landscape, reported seeing this creature. Walking upright, the hairy creature screamed and beat its chest. The fisherman jumped onto his horse, which was already frightened, and fled the scene. The creature chased the fisherman and the horse, but abandoned the chase quickly.

After the first sighting, the newspaper speculated that this could have been some sort of gorilla, perhaps escaped from a traveling circus. The next report of the creature, however, hit the papers a week later, and deepened the mystery.

“Some thought the thing a myth, perhaps originating from the fertile brain of the writer,” said the column. ”But now, perhaps, they may think otherwise after reading this.”

William Butler of Denton Hill had claimed to see the creature, and the paper stated that Butler was known as a “very truthful man.” He spotted the creature eating a groundhog, and when it saw him, it roared, beat its chest, and jumped toward him, one jump covering a distance of about thirty feet. This time, there was a better description: The creature was about six feet tall, upright, with an excessively hairy head, and tusks that were six or seven inches long.

This time, also, the newspaper gave the creature its name. The article read,”Bill looked at the Potter County Nondescript fully a minute or more.”

The creature would likely have attacked him, except Butler’s dog barked at it, and seemed to frighten it off. Butler said he had a gun in his pocket, but was so shocked by the thing that he never even thought to use it. The newspaper advised local fishermen and hunters to be careful. The May 12 edition of the Enterprise reported that the creature seemed to have moved south, heading down into Clinton County and toward Kettle Creek. The article mentioned that the creature had been frightening, but had not hurt anyone or done any known damage, and expressed their wish that it would stay down in Kettle Creek for a while. 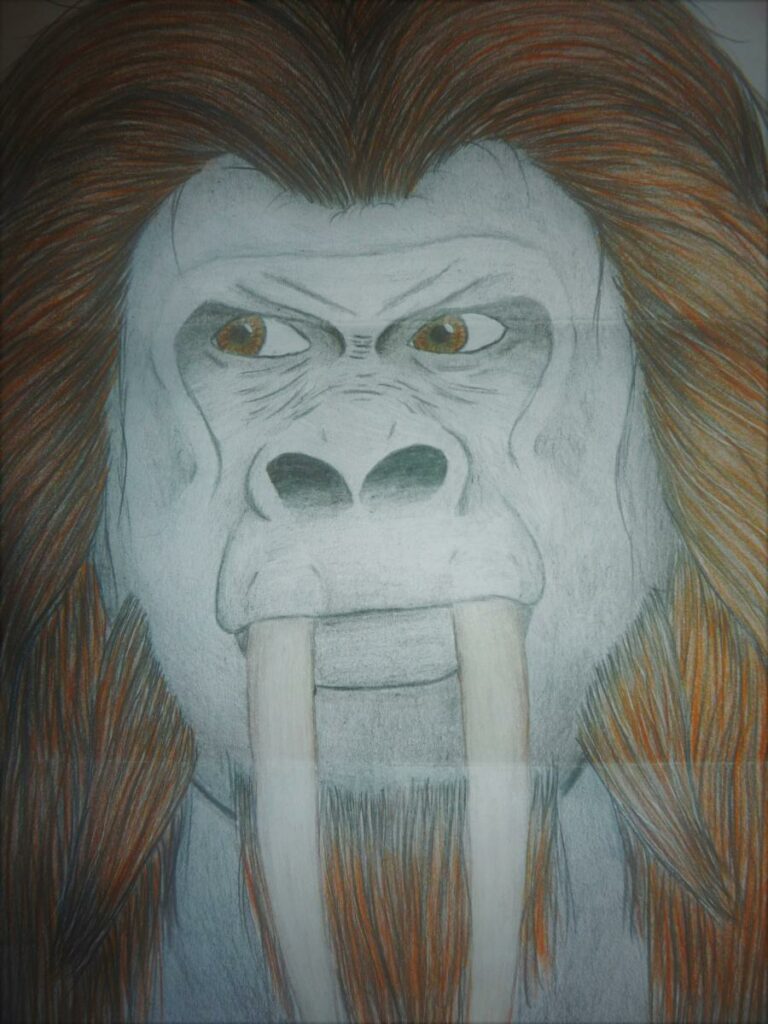 And on June 16, the whole thing blew up into an argument between the writer from the Enterprise and a female correspondent over at the Potter Democrat. The correspondent had written a column mocking the Enterprise and their reports of the Nondescript, referring to it sarcastically as a “wild man.” (Hey, I get it. The second this piece hits Facebook, I’m going to have people making negative comments.) The Enterprise responded by claiming that the correspondent knew nothing about these creatures, and then their commentary devolved into a few personal insults.

“You need not fear my wild animal or any other,” commented the writer, “as the color of your auburn locks bears such close resemblance to a ball of fire that if by chance you should happen to meet it, a shake of your head would immediately start it for the hills.”

After that, there seem to have been no more sightings of the Potter Nondescript. But you never do know. There’s a lot of dark forest up there, and maybe there’s a creature still lurking around. If you go up into the Dark Skies Landscape, take a camera, just in case.

Something wicked this way comes…

If you loved “A cryptid in the woods of the PA Wilds” about The Potter Nondescript there is more to come! The “Ghosts in the PA Wilds” is a series of ghost stories written by historian Lou Bernard, who revels in folklore and the paranormal. The PA Wilds Are Calling blog will feature a new ghost story from the region each Sunday of October. Stay tuned for more stories and remember to keep your eye open when in the forests of the PA Wilds…