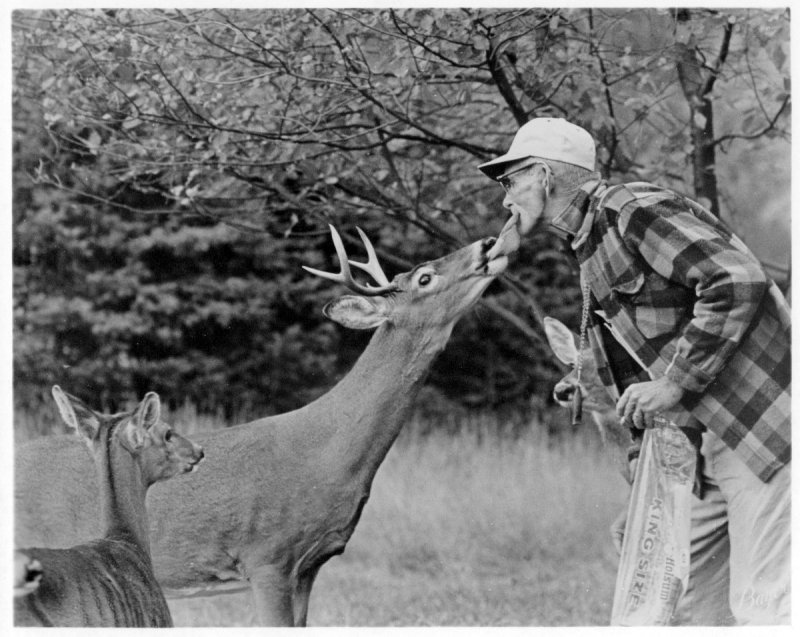 As a know-it-all teenager, I was highly skeptical of the legend of Slim Croyle, but Aunt Dorothy said it was for real.

Aunt Dorothy never lied. A larger-than-life, jolly lady, quick with a laugh and a participant in many spirited practical jokes, you never knew what to expect. Her sentences always began with, “Say,” and usually ended with, “well isn’t that swell!”

When she suggested we go down to Cross Fork in the PA Wilds Dark Skies landscape to watch this guy “Slim” feed bread to a herd of wild deer, my rebellious teenage side told me I was way “too hip” for this sort of thing. On this warm August evening, I was perfectly content to hang out at Grandpa’s camp in Sweden Valley.

Aunt Dorothy would hear nothing of it and insisted I go. She guaranteed we would have a “swell time” watching Slim do his thing.

And so, I went. Pretty much under protest.

The whole family crammed into Dad’s 1960-something Chevy Impala station wagon and we headed south on Route 44 out of Sweden Valley, down Route 144 through Potter County’s majestic hemlocks, pines and chlorophyll canyons to Slim’s farm. This was a place known as Laurel Bottom, roughly midway between Cross Fork and Ole Bull State Park.

I was, quite frankly, surprised to see dozens and dozens of cars lining both sides of the road and crowds of people. Whatever this was all about, it surely must be something special. Getting out of the car there was excitement in the air, a festival-like atmosphere with children easily outnumbering adults 3 to 1.

Suddenly, much like a rock star taking the stage, a tall, elderly man toting a bread bag emerged to cheers and applause from a crowd of roughly a couple hundred people gathered along the road. Holding a whistle, he smiled, nodded to the crowd and signaled for silence. You could have heard a bread crumb drop.

The show was on. 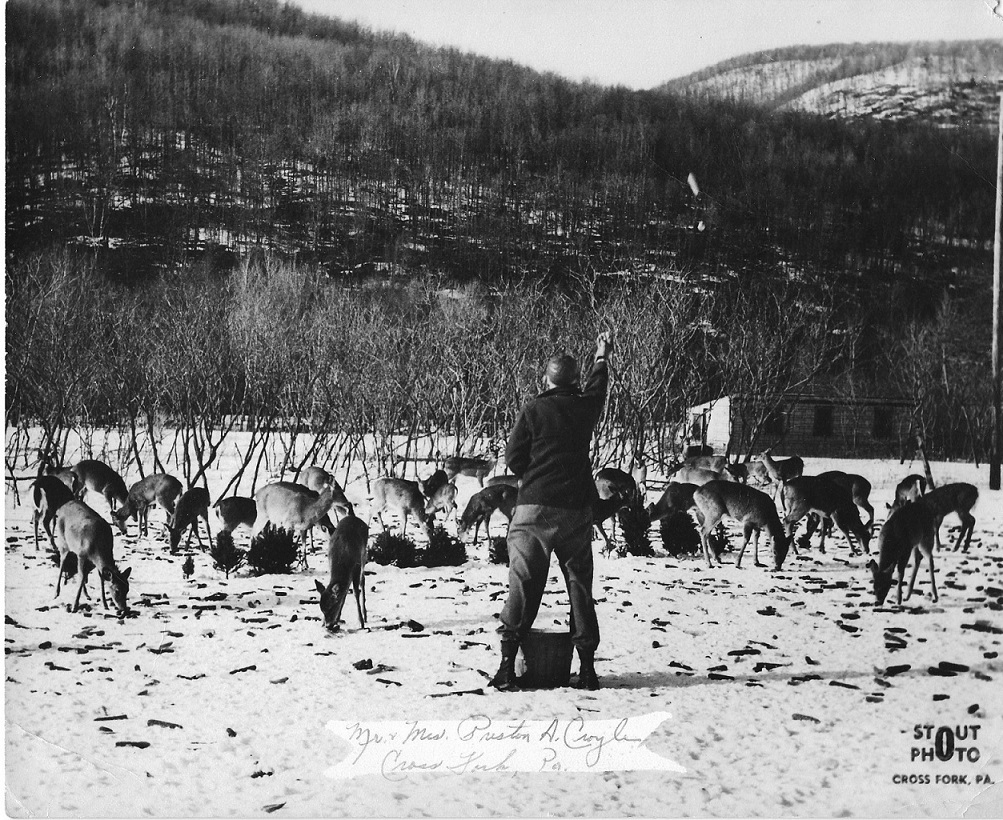 With a blast from his whistle, as if on cue, dozens of deer suddenly emerged from the mountain woods, walking slowly down to the edge of the meadow, and stopped.

At that point, Slim began calling them up by name: “Hey Teeny, Hey Dolly, Hey Daisy.” One by one, as if actually knowing their names, they approached him.

With a slice of bread hanging out of Slim’s mouth, a big buck came right up and took it!  As the adults “oohed and awed,” children squealed with delight. The applause grew louder. Aunt Dorothy shot me a glance and with a hearty laugh she yelled, “Say, isn’t that just swell!” I had to agree. It was indeed “swell,” bordering on “magical.”

Slim gave some of the children bread and they fed Teeny, Daisy and Dolly and the rest of the deer right out of their hands. My youngest sister said it was a “magical moment.”

Scanning Slim’s guest registry book nearby, I noticed the names and hometowns of people from most of our 50 states and even several foreign countries. Alongside was a donation bucket to help pay for the deer food. Photos of “his deer” were also for sale.

Those who knew Slim best said his love and passion for animals was not only remarkable but unequaled anywhere in the Commonwealth. He set out 35 bushels of cracked corn every week throughout the winter months. Slim even housed and cared for injured deer in a bedroom of his home! His wife Hilda brought this practice to a screeching halt when the deer kept pawing at the curtains, ripping them down.

In 1960, word of Slim’s talents reached Harrisburg, and he was awarded the Pennsylvania “Humanitarian of the Year” Award from the Pennsylvania Society for the Prevention of Cruelty to Animals.

A PennDOT worker right up until retirement, Slim was a former Stewardson Township Constable and World War I veteran. He took ill in the early 70s and, in the months after, Slim was no longer able to put on his evening show; people driving by the farm noticed the deer still showed up at the edge of the meadow. They say the deer would stand perfectly still, patiently waiting for the man with the food to show up and blow his whistle.

Slim was 74 when he passed away at Cole Memorial Hospital in Coudersport on September 27, 1974. Wife Hilda had passed 13 years earlier. Slim left only one immediate family survivor, a stepbrother in Altoona. There was no one in the family to whom he could pass the torch. His eternal resting place is in Highland Cemetery, Centre County. 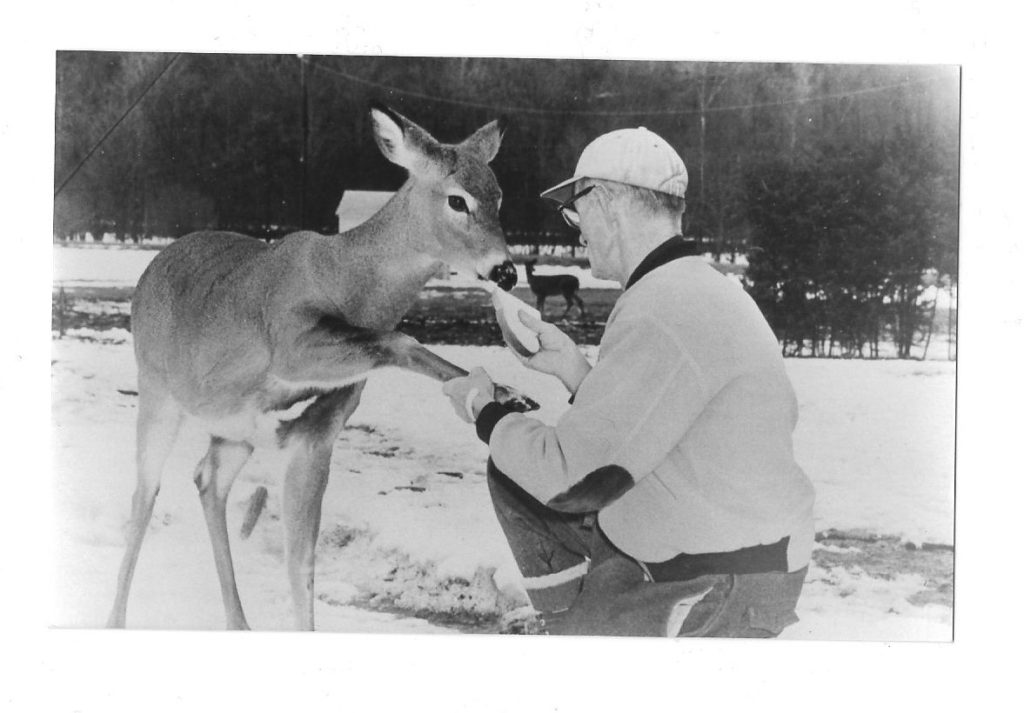 While the numbers of Slim’s faithful followers, those of us “of a certain age,” continue to shrink in numbers, our recollections of the “deer whisperer” are still quite vivid. The experience left an indelible lifetime impression on so many children, including my siblings and me.

With his passing, a tradition and summer ritual fades into a lifetime memory shared by hundreds, perhaps thousands, of us who all agree that Slim Croyle was special – even maybe “swell.” Just like Aunt Dorothy said.

*Photos courtesy of The Potter County Historical Society, Coudersport. Some photos were from “Stout Photography, Cross Fork,” a shop which went out of business many years ago, according to the people at the Historical Society