Traveling to see the Dark Skies of the Pennsylvania Wilds has never been easier – all you have to do is take the “Highway to the Stars.”

Route 44 in Potter County was designated by the state legislature as the “Highway to the Stars” earlier this year, after Curt Weinhold – a Wilds Cooperative of Pennsylvania juried artisan – came up with the phrase.

Weinhold, an award-winning photographer known for his night scenes and for teaching others to photograph the stars at Cherry Springs State Park, explained that a photo he took of the Milky Way over Route 44 in winter 2016 led to his idea to designate the thoroughfare.  (Photo at right: “Route 44 – Highway to the Stars” by Curt Weinhold) 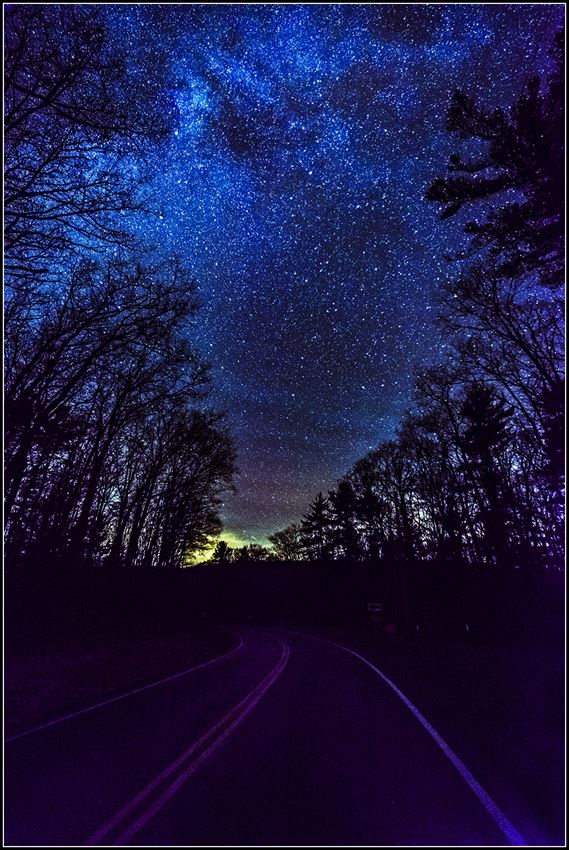 State Rep. Martin Causer introduced the initiative (Act 70 of 2018) and after passing the legislature, the designation was approved by Gov. Tom Wolf in June.  The designation for Route 44 extends from Scenic Route 6 to the Lycoming County border.

On October 19, officials and community members gathered to officially dedicate the state route and unveil the first sign, including both Weinhold and Rep. Causer.

The name “Highway to the Stars” seeks to recognize the importance of the dark skies at Cherry Springs State Park, an 82-acre park that features many free astronomy programs designed to help the public learn more about outer space. Open year round, Cherry Springs is a designated Gold Level Dark Sky Park by the International Dark Sky Association. Travelers are able to experience the dark sky viewing field and amphitheater, and there is a separate observation area for astronomers, professional photographers and others with specialized interests.

The state park is one of the top three attractions for which travelers request information, according to Visit Potter-Tioga, the area visitor bureau that promotes Potter and Tioga Counties and serves the traveling public.

“This designation is a very important recognition of the quality experience offered at Cherry Springs State Park,” said Lori Copp, executive director of Visit Potter-Tioga, who commended Weinhold’s effort to spearheaded the designation and the support offered by state and local legislators, including Rep. Causer and state Sen. Joe Scarnati. “As Pennsylvania’s only international Gold Level Dark Sky Park, it plays a vital role as one of the regional assets for visitors and residents alike.”