My family’s trip on Scenic Route 6

Not too long ago, my family took a weekend trip. I pitched the idea that, on the way home, we take Scenic Route 6 across the northern part of the Pennsylvania Wilds and make a few stops along the way.

I did this for two reasons: My family likes to stop and see interesting things, and I could get an article out of it. I always try to do this; otherwise I might have to get a real job. 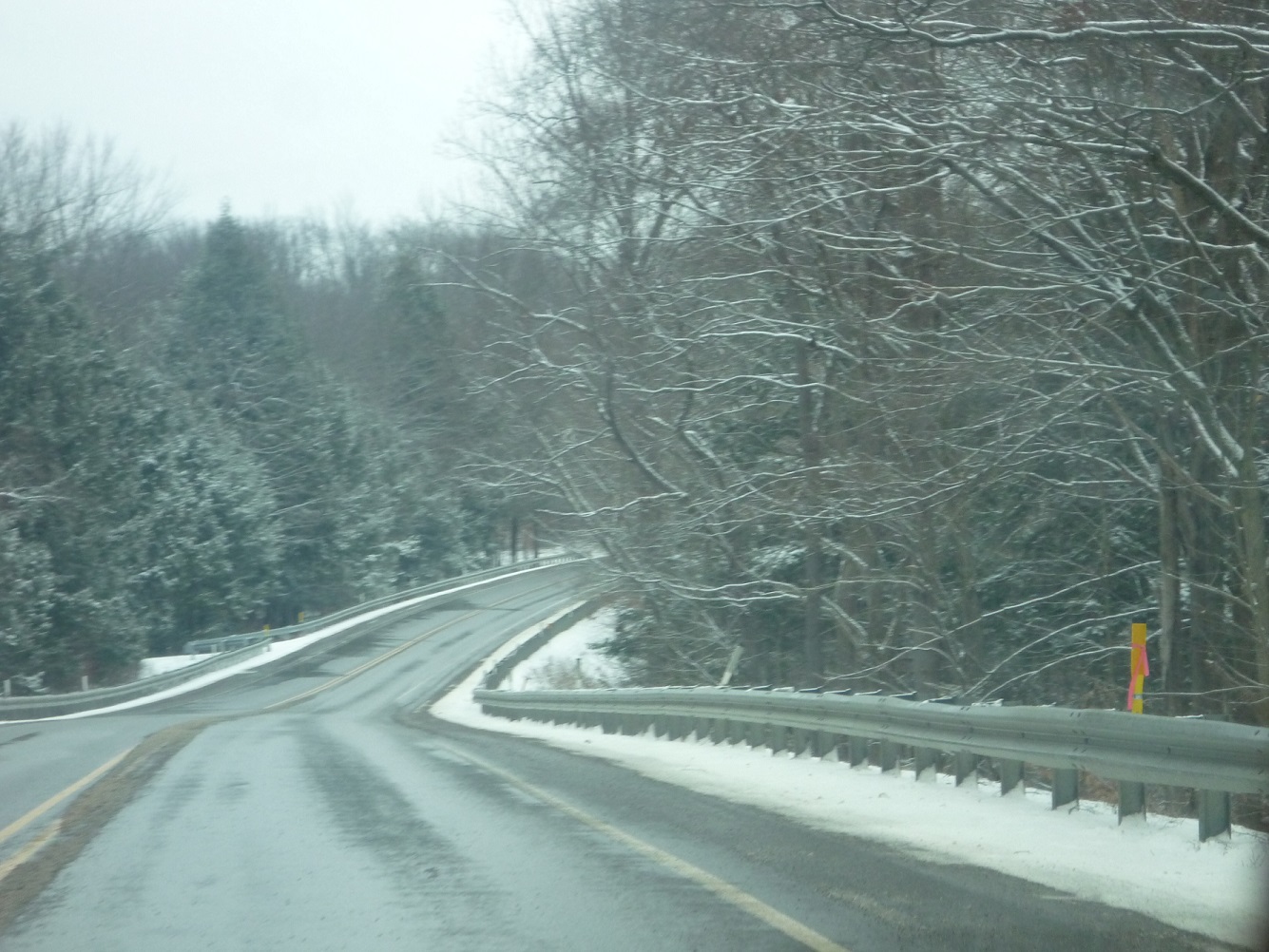 “After breakfast, we’re gonna get on Route 6,” I announced to my family as I drank my coffee. “It’s one of the scenic routes in the Pennsylvania Wilds. Time and weather permitting, we’re going to see some of the neat stuff out there.”

“You’re working on an article, aren’t you?” asked Tiffany.

I have a wife, Michelle, two adult daughters, Tif and Biz, and a 4-year-old son, Paul Matthew. Generally, they’re up for adventures like this. One thing I like about my family is that they’re usually pretty cool about making stops in transit when we travel.

I wore my PA WildSPEAK ID card on a lanyard, which denotes I’m a member of the PA Wilds civilian storyteller corps. There is no reason for this; I’m not required to wear it, but it makes me feel all official. I’m dying for someone to demand to see my credentials. I’ve even added a small magnifier and a survival tool to the lanyard, and I’m hoping for the chance to use this stuff to save my life sometime.

Along the way, we drove through Warren. I’ve been to Warren before, and it’s a great community. This time we were doing this in the middle of winter, but I’ve visited for the Fourth of July in the past, and they really do it up big there. There’s a parade and a huge festival, which I described to my family.

“We know, Dad,” said Tif. “You’ve told us all this about a million times.”

“Well, then, how about the Allegheny Reservoir?” I said. “There’s a huge dam, and several beautiful lookout points. It’s a few miles up ahead. I love how, in Pennsylvania, when they decide to build a dam, they at least make it scenic.”

We stopped and took photos of the dam, which is really neat.

But the biggest hit was the Kinzua Experience.

“I want to see the Kid’s Bridge,” Paul said. I took a moment to consider explaining that it’s “Kinzua Bridge,” not “Kid’s Bridge,” and then abandoned the thought and hoped he’d enjoy it anyway.

The Kinzua Bridge in McKean County was built in the 1800s, and was once the longest railroad bridge in the world. In 2003, about half of it was flattened by a tornado, and that portion still lies on the valley floor. At what’s now Kinzua Bridge State Park, they’ve added a walkway and lookout point, and in 2016, built a beautiful and highly kid-friendly visitor’s center. We went in and discovered that it is basically a kid’s bridge, after all.

Every single display inside is interactive, and wonderful for kids. The first thing we saw was a Kinzua Bridge made from blocks, which Paul got to knock down and then rebuild. There were toy trains, a virtual train car to sit inside, and a neat display of cabinets featuring both Bigfoot and the lost Kinzua Bridge treasure. My son and I spent considerable time pressing the button that made Bigfoot noises, because he needs to know that learning can have a practical application. 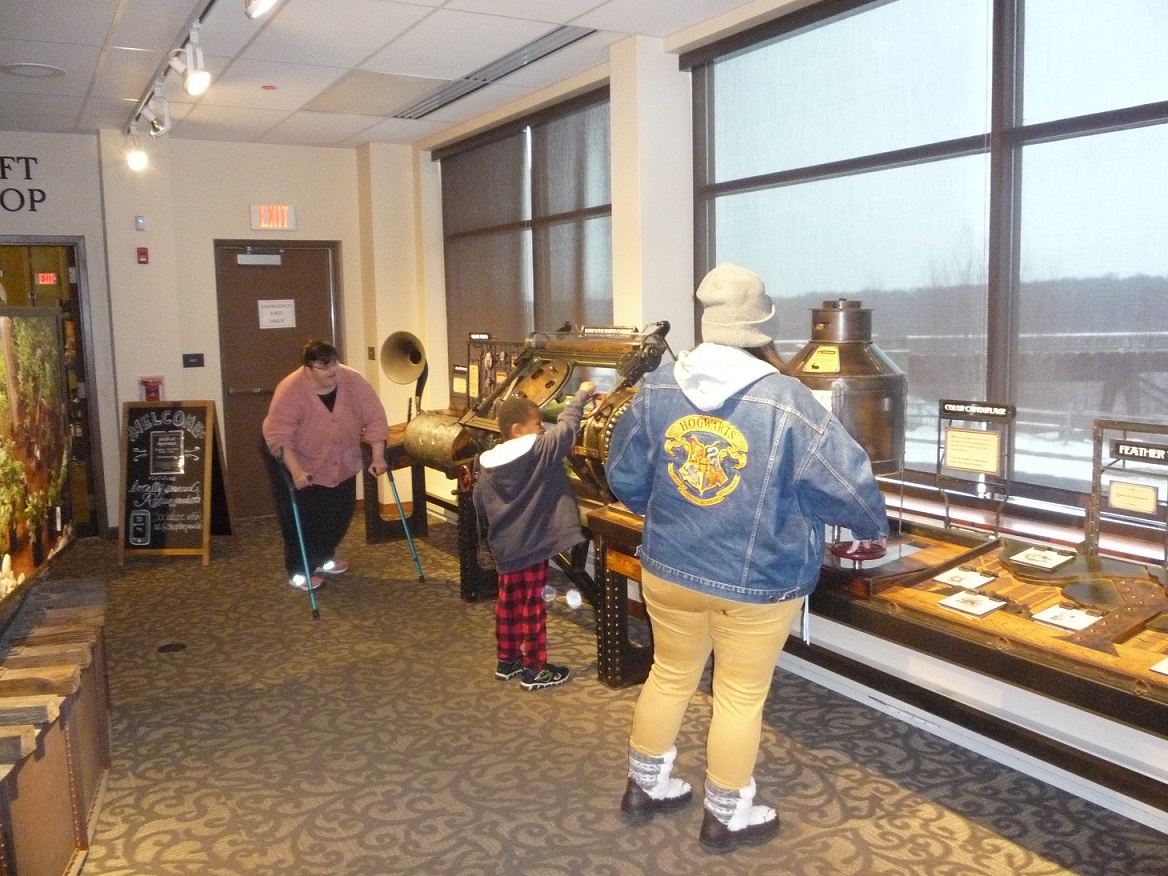 We stopped at the PA Wilds Conservation Shop in the center, and bought out the place. Paul wound up with a pink shirt showing an elk riding a bike, with which he was delighted. (He slept in it that same night.)

And then we walked out onto the bridge itself. The walkway is exciting, taking you far out over the valley, and there is a glass floor on the far end that we were all terrified to stand on. We also had to tell Paul to quit licking the bridge, which is not a phrase I ever thought I’d have to say. 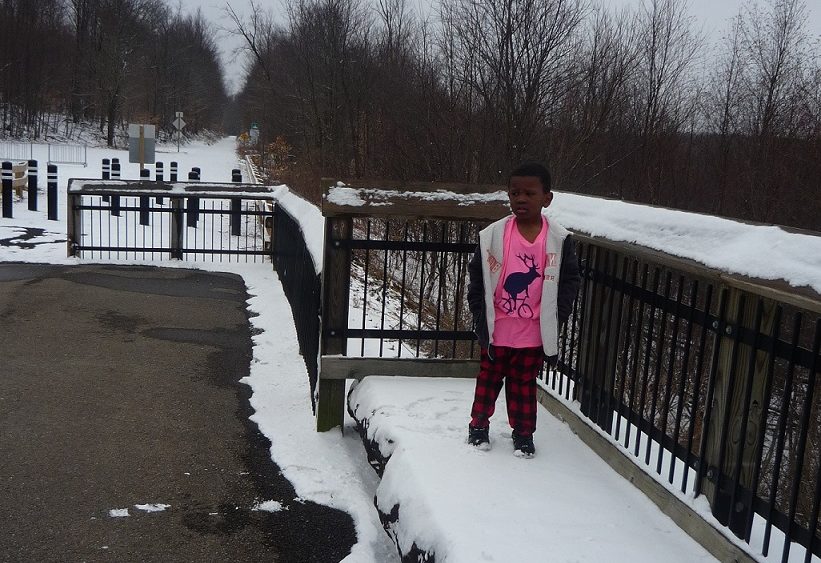 We looked out over the valley, and saw the ruins of the bridge.

“When I see the broken bridge, it makes me sad,” commented Paul. “I want to cry.”

My son is right. There is something immensely sad about seeing the remains of the bridge lying on the ground. But the park people have done an exceptional job with it, making it into a sight well worth seeing.

“Yeah, I know, little man,” I agreed. “When it happened, I wanted to cry myself. But they made a really fun place out of this.”

Because of time constraints, we didn’t get to see Cherry Springs State Park or the PA Grand Canyon. (Ironically, Cherry Springs is best viewed after sunset, hence the Dark Skies landscape moniker, and we’d been traveling too efficiently to be there at night.) That gives me something else to shoot for some time soon, on another trip with my family. After all, there’s plenty to see and do, all within a couple of hours of home.

For more information about PA Route 6, be sure to check out the PA Route 6 Alliance website here.  The PA Route 6 Alliance, a nonprofit organization, was established in 2003 to manage the PA Route 6 Heritage Corridor and to implement the Management Action Plan, branding and marketing plans, community development programs and other planning efforts along the corridor. The Alliance includes representatives from all 11 counties, 9 convention and visitor bureaus, 4 heritage areas, local development districts, local business owners, Chambers of Commerce and other interested parties along the corridor.

2 thoughts on “My family’s trip on Scenic Route 6”