How a guided fly fishing tour made lessons a reality

Growing up, the first day of spring (my dad is an accountant, so this was defined in our household as the first Saturday after the close of tax season) was spent playing catch with my dad and willing/available siblings.

I don’t remember the first time I picked up a baseball, but I remember starting young, the smell of glove oil and leather, the struggle of getting my grip on the ball and the slow progression of getting better over time as I practiced the mechanics. As I got older (and better) the new thrill was in trying to not have a red stinging hand from catching my dad’s fastballs and spending more time throwing than rooting around for a missed catch that landed in our forsythia bush (which acted as our natural backstop).

I always looked forward to that first catch of the season, a true family tradition.  As I approached my 40th birthday, I began looking for an outdoor sport that could fill that family tradition spot.  While throwing ideas around with my boss and archer, Ta Enos, she recommended fly fishing. At the time I didn’t know much about the sport, but I loved the idea that it involved water and, in all honesty, I think fish are cool (even if that statement is not).  Just a couple of months after our conversation, my colleagues surprised me with a rod for my birthday and, just like that, I was learning to throw a baseball all over again.

I learned very quickly that fly fishing (like baseball) is not something you can just pick up overnight.  I had no idea what I was doing, so that winter when I saw Butler County Community College was holding an introduction to fly fishing course I quickly signed myself up.

During the first 30 seconds of my very first class, my lack of knowledge about the sport hit me like a ton of bricks. First off there is a lot of science and memory involved.  You need to know water temperatures and flows, fly hatch types, and so many other things, as well as understand the muscle memory to properly cast and catch a fish. I learned a great deal during the six-session class, but the biggest takeaway was that it would be a long time before I would feel confident enough to venture out on a river alone.

The class ended in early spring and all summer I spoke with many anglers who said they’d take me out on but it never came to fruition, and my rod sat gathering dust. The longer I waited the less confident I became that I would ever find my way into the water. 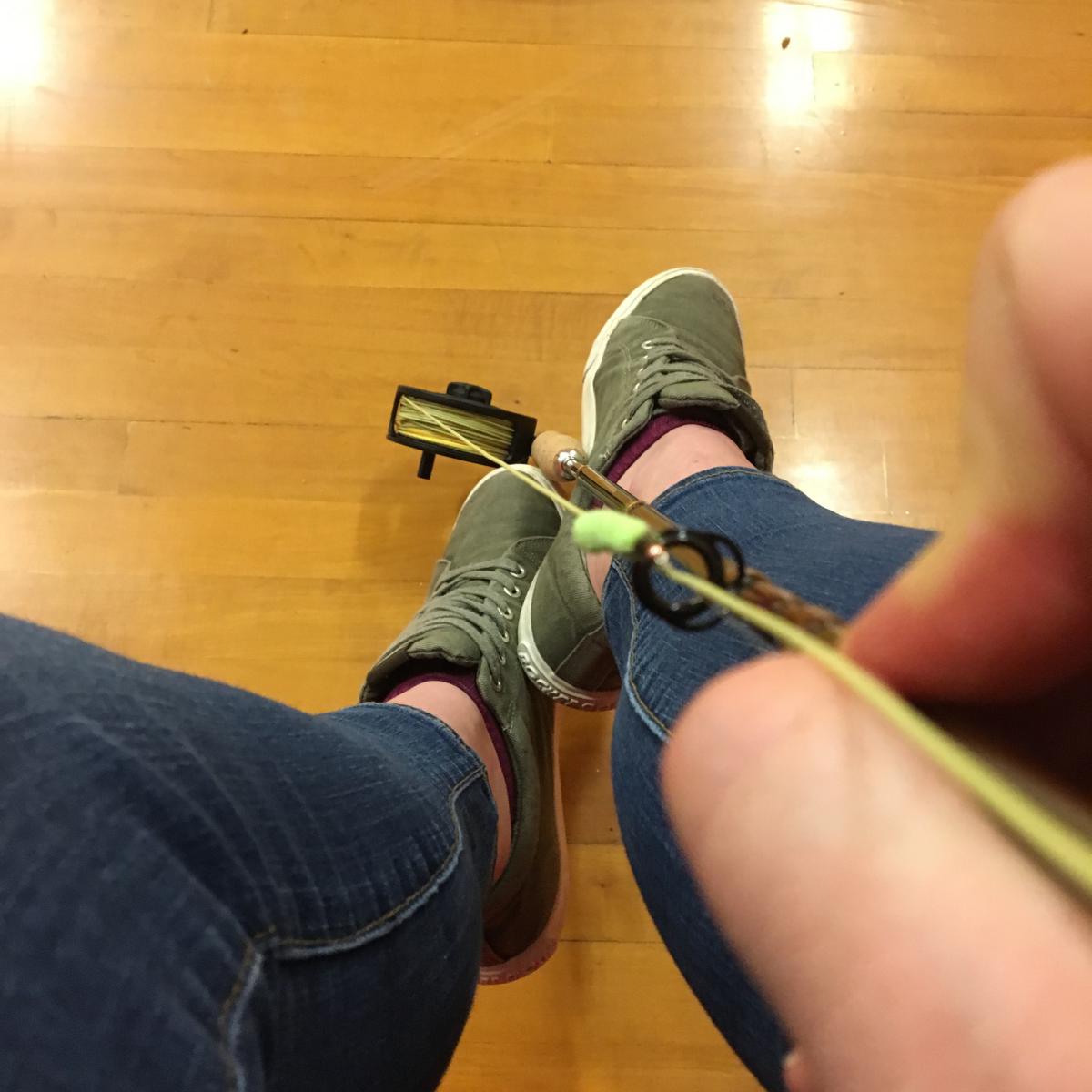 Nick DelVecchio of Wildwood Outfitters reached out to our content team at pawilds.com about some blog opportunities, and he proposed the idea of someone from the PA Wilds Center team taking one of his guided trips (at a discounted rate) and then writing about it.  The idea was forwarded my way, and I jumped at the chance to receive one-on-one instruction. After an intro email, I booked the trip for the first Friday in June.

As the date approached, Nick was in contact via email to ensure I was properly prepared for our trip.  For me, a major advantage to a trip with an outfitter was not only tapping into the knowledge of my guide, but also access to gear. Fly fishing requires quite a bit of gear, and I have only the bare basics of a rod, reel and a handful of flies that had been graciously handed down to me by a friend.  He had waders and boots (thankfully because I have not made that investment yet), net, all of the accessories necessary to safely release a fish, flies for every occasion, additional gear that I don’t even know about, and an amazing camera. This left me responsible for a hat, sunglasses, and a rain jacket – check, check, check.

To say we had a wet spring is a severe understatement. It rained 21 days in May, and June started with rain too. Leading up to my trip, memes circulated social media comparing the effects of the record-breaking rain days to the need for Noah’s Ark.  On the eve of our trip, Nick emailed one last check-in, this time to update me on water flow with a link to a great water data tool.

He explained the average flow in early June on Kettle Creek is about 114 cubic feet per second, and the most recent recording put it at 394 cubic feet per second.  That’s quite high, and due to the constant rain, we’d find measurements like that just about everywhere worth fishing at the moment. He advised it could potentially make things a bit tougher than usual, but he assured me we’d work hard and find some fish!  With any luck, it would keep dropping and we would be fishing it in the 200’s by the time we hit the river (which it did). I awoke on June 7 to a clear, gorgeous day. Not a raindrop in sight, and I could not have asked for more beautiful weather. 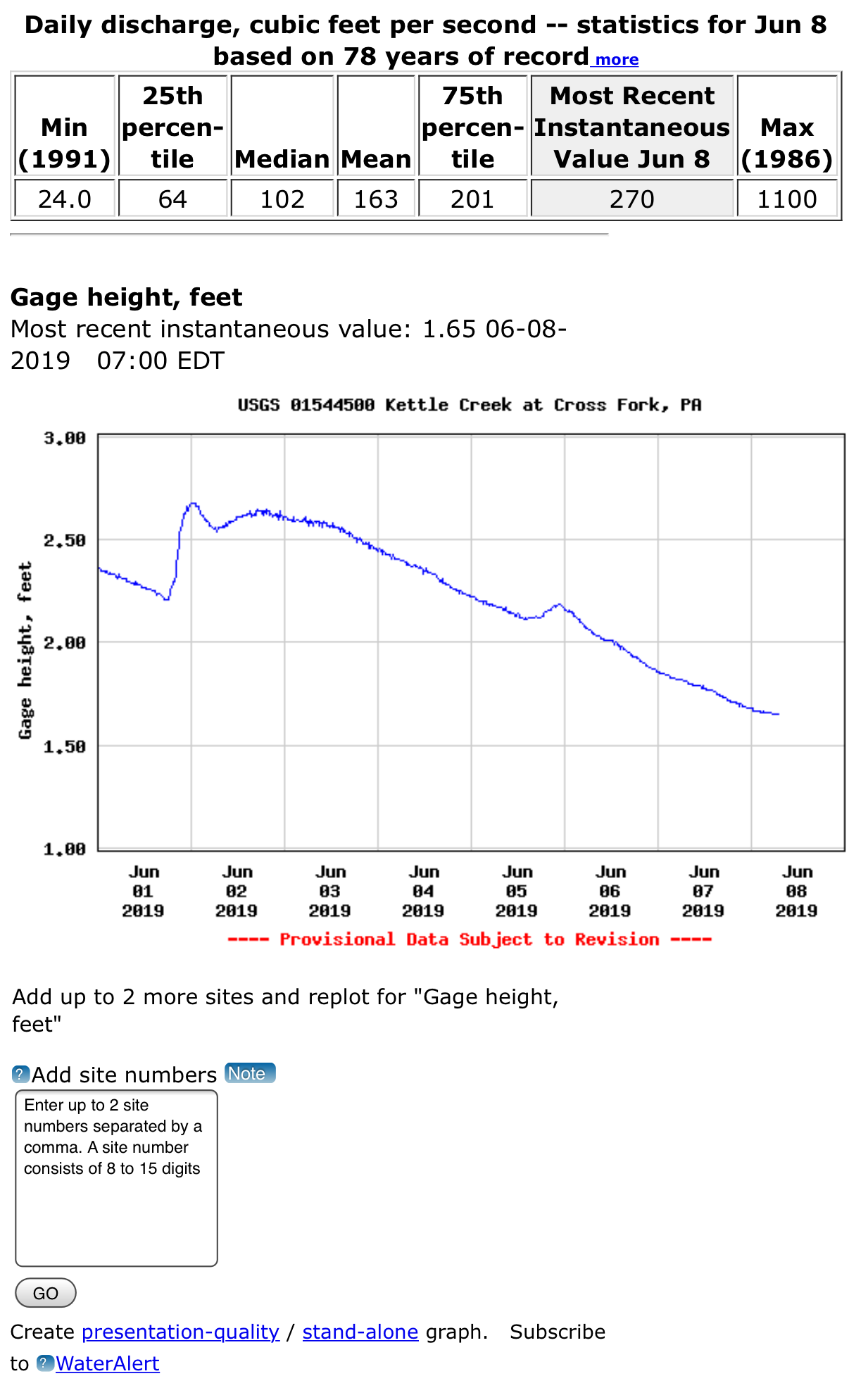 We met in Benezette, located in Elk Country, and traveled out to Kettle Creek in Nick’s truck.  Along the way, we talked about the PA Wilds and Nick’s passion for fishing.  He grew up fishing the rivers with his dad, and he had a fondness for the area that went beyond the opportunity of great fishing locations – there was a sense of tradition and memories.  He also shared stories of fishing in Colorado, both on family vacations and then at his summer job during college. He had graduated from Clarion University as a social studies teacher but soon realized that the river was the classroom where he should be teaching.

We arrived in the parking area, and I started to get more excited and a little nervous – the river was right there, and after 18 months of prep and waiting, I would finally be fishing!  I climbed into my borrowed waders and boots, took a nice deep knee bend and breath of cool air, and we were off. I had some serious spring in my step, and it was a bit of a trek back to our first spot, the ferns and greenery were thick and lush from all of the rain and Nick used his net in a fashion reminiscent of a machete to push the brush aside and clear a path.  For a moment I felt as though I could have been deep in the forest of some exotic and faraway land, and I was once again hit by the reminder of how blessed I am to live in the heart of the PA Wilds, providing me access to such a pristine location within a one-and-a-half-hour drive.

We approached the river and this was the moment of truth, after all of the build-up this was it.

Nick reviewed some of the basics as a refresher to what I had already learned about casting, and in that moment I thought, even if I don’t catch a single fish today this is going to be amazing. 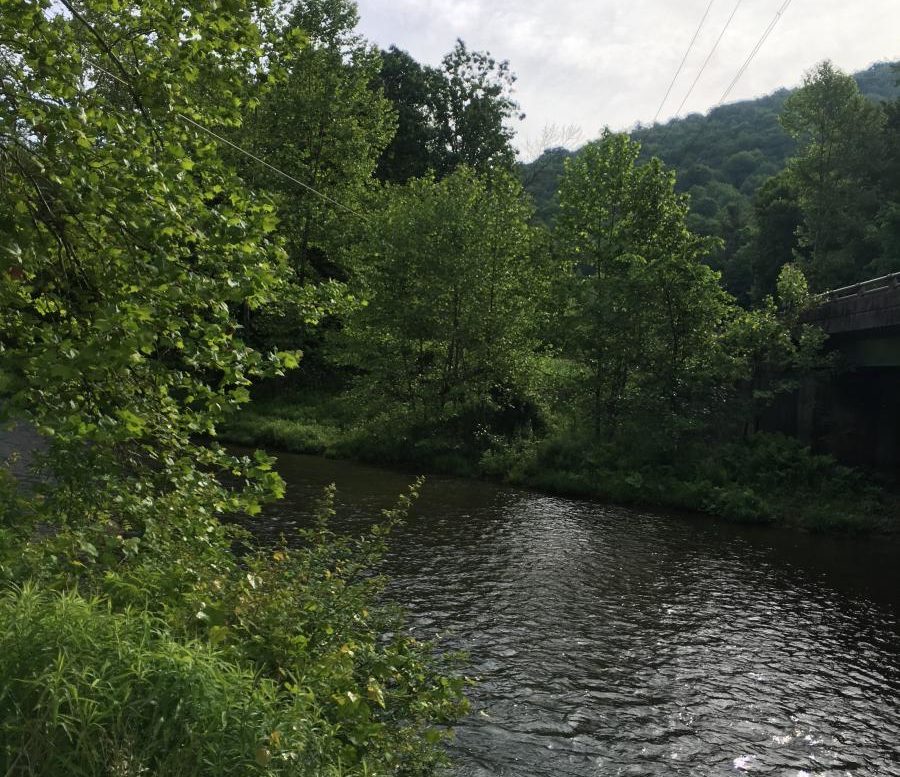 I sent out my first cast and immediately had a fish!   As he talked me through reeling the fish in I felt like a total spaz, I was reeling the opposite way (something I did all day as the reeling direction felt counter-intuitive to me), and as we brought the fish into the net, it revealed I had caught a very small rainbow trout.  The fish got away before a good photo could be taken as I was completely inept at how to hold the net at the right level in the water to keep the fish comfortable but not let him get away.

All of the excitement and the rush of catching the fish was contagious, and I instantly fell in love with a sport that up to that point I had been learning about in a scholarly manner.  And I was hooked (the pun is completely intended).

As the day progressed, I continued to catch fish as we worked our way up and then down the river.  All in all, I caught 13 fish, including a beautiful brown trout and a “larger” (for me) rainbow. In my opinion not a bad haul for a complete newbie, and I owe all of the success to Nick. He knew all of the spots, and helped me through the entire process. He set up the right rigs, selected the flies that would tempt the fish, told me when to “set” the hook, and then helped to handle the fish once caught.

I definitely need a lot more practice in handling fish before I can head out on the river by myself.   I highly recommend a guided experience for any level angler; as a newbie it’s a no brainer – this trip gave me the confidence and laid a foundation of knowledge to get me back on the river. For more advanced anglers, whether they are visiting the area or are locals, it gives them a chance to find the great spots and also talk through technique and learn from one another. Nick’s lifelong experiences on the river, passion for fishing and training as a teacher make him a natural fit for a guide.  He was patient with me as I tried so hard to get the hang of a hook set, as he continued to try and teach the motion in a variety of ways (I’m still working on it).

At the end of the day my legs were sore (walking upstream in swift water is an incredible workout), my cheeks hurt from smiling, and I was in a state of true content.  The day had been perfect in ways I could have never imagined. I loved standing in the water (and it was extremely hard for me to not just start floating; I really love being in the water) and allowing myself to be absorbed in the moment.  Throughout the day, I took mental photographs and kept my phone in my pocket, thinking less and less about pulling it out for photo ops.

I have a long way to go before I’m a good angler, but I’m glad that I picked this as a sport and that I am able to remember the first time I picked up a rod. Learning something later can be a bit tougher as our minds and bodies are a little less malleable, but it also allows for another level of appreciation that is sometimes lost in youth.  With traditions there’s something remarkable about how memories are transferred through teaching, allowing for reflection and space to attach new memories.

EXPERIENCE YOUR OWN GUIDED TOUR!

Those interested in going on a guided adventure in the Pennsylvania Wilds with Wildwood Outfitters have a chance to do so at a reduced rate!

Use the coupon code PAWilds for 10% off of any of guided trips at www.wildwoodoutfitterspa.com. The code is valid for both the 2019 and 2020 seasons. 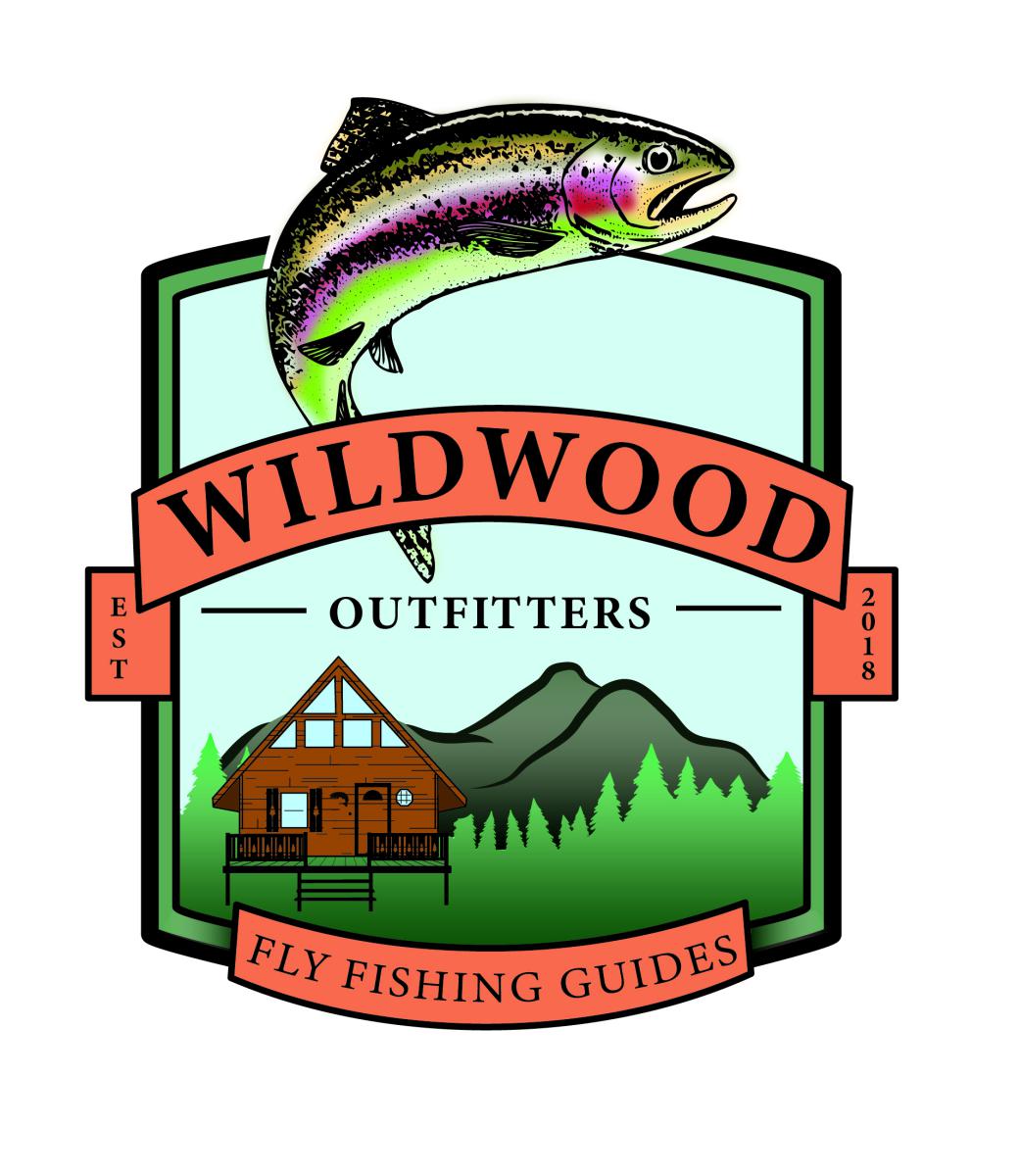 Disclaimer: Abbi Peters, Executive Vice President of Creative Commerce at the PA Wilds Center for Entrepreneurship, Inc., was given a discount on a guided fly-fishing tour by Wildwood Outfitters to write a first-hand account of her experience.

Author: Abbi Peters
My husband and I relocated from Los Angeles to Ridgway in 2007. We purchased a 10,000 square foot Georgian Federal building that had once been a grade school and we have been renovating it ever since. We were lured into the region by the building but we stayed for the boundless opportunities, beautiful scenery and strong sense of community. As Managing Director for the PA Wilds Center I am excited to bring my passion for our region to my job every day.