Let’s say you’re out hiking. You’re on one of the trails in Clinton County. It doesn’t matter which one; choose your favorite. But imagine you’re hiking in the woods, and you look up ahead and see a creature on the trail.

It seems to be a mishmash of several animals, with the base animal being a wolf. You raise your camera to get a photo, but it darts into the forest.

You’ve just encountered the Giwoggle, and it’s the official monster of Clinton County.

Stories of the Giwoggle date back to the mid-1800s, and on July 21, 2011, the government of Clinton County proclaimed it to be the county’s official monster. It’s a creature of legend, and if you’re lucky, you might even spot one

The Giwoggle was, according to legend, a kind of artificial werewolf creature that could be conjured or summoned by a witch.

Legends of this thing were in West Keating Township back in the 1800s, where an old woman named Belle Confer told her grandchildren bedtime stories about the thing. Her grandson George Rhone was so affected by the stories that he grew up to write them down in Keystone Folklore Quarterly, preserving them for future generations.

The Giwoggle is not the easiest creature in the world to physically describe. It was about six feet tall, shaped like a wolf, and stood on its back legs. Instead of front paws, it had bird claws, and instead of back feet, it had horse hooves. This was to confuse trackers trying to follow it. 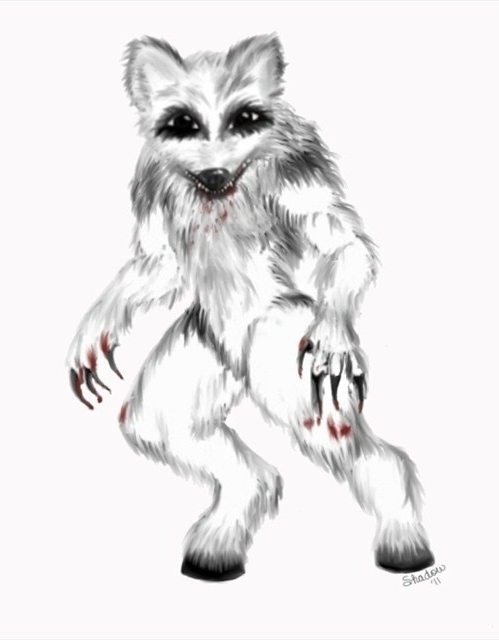 The legends all involved local women, who were believed to be witches, casting spells to conjure up one of these things when a nearby farmer offended them. They would send the Giwoggle to harass the farmer, which often took the form of annoying stunts and petty vandalism. The Giwoggles didn’t seem to be violent for the most part. Farmers would wake up and find their crops trampled, tools damaged, and Giwoggle tracks around the barn. In one of my favorite bits, a farmer found his cows frightened and trying to smoke a portion of a cornstalk.

There is a hero figure that often appears in these stories: Loop Hill Ike.

Loop Hill Ike lived in Keating Township, and was depicted in the stories as a sort of freelance paranormal expert. In many old legends from the area, he was said to be the only guy who could help with witches, ghosts, and definitely Giwoggles. The farmers would ask for his help, and Ike would counteract the spells. If that didn’t work, he would grab his shotgun, go to the witch’s cabin, and burn it down. Loop Hill Ike was not a man to mess with.

Loop Hill Ike was actually based on a real guy: Isaac Gaines. Gaines lived in the Keating area from 1837 to 1915, and was the grandson of an escaped slave from Virginia. He married into the Confer family, which means Sarah Confer told her grandson stories that cast his own uncle as a sort of professional monster-hunter.

As Isaac Gaines has been buried in Furst-McGonigal Cemetery in the Clearfield County area since 1915, it’s safe to say he’s dead by now. Oddly, people driving near the Clearfield-Clinton border have reported seeing “bipedal wolves” running beside the road. With a quick glance, a Giwoggle might easily be described as a bipedal wolf, so perhaps the creatures are lurking around the grave of their old adversary.

The Giwoggle has even been known to get closer to civilization, though it’s been a while.

In February of 1909, when panic over the Jersey Devil reached a peak, creatures were sighted at night, lurking on rooftops in downtown Lock Haven. The newspapers speculated at the time that this might be the Giwoggle, coming into town in search of prey.

Is the Giwoggle real, or just an old legend?

It’s hard to say for sure. But one thing is certain: When you’re visiting Clinton and Clearfield counties, both located along the I-80 Frontier Landscape of the Pennsylvania Wilds, bring your camera. And don’t offend any witches.

One thought on “The Giwoggle: Clinton County’s Official Monster”