When Mickayla Poland — an artist and business owner based in Elk County — was approached to help with a mural series that would bring awareness to how stormwater affects watersheds, she didn’t have to think twice about it.

Poland, whose art is inspired by the landscapes of the Pennsylvania Wilds and the wildlife within the region, said that “preserving our beautiful natural resources” is a mission of her business, PA Made LLC. She was approached by the Elk County Conservation District to create two murals on storm drains in Elk County that would help the organization raise awareness of the damaging effects that dumping waste has on streams and rivers.

DeLong said that the project — called “Up Stream” — was spearheaded by Stephanie Stoughton, a former employee of the organization. Stoughton worked with the Elk County Council on the Arts (ECCOTA) to receive a PPA Project Stream Grant to fund and complete this project.

The first phase of murals funded by the project are found in Ridgway, Saint Marys and Johnsonburg.

“I’ve always been inspired by our unique and beautiful landscape so it only seemed natural to use that as inspiration,” Poland said of her finished pieces. “I also wanted to highlight an animal that lives in our local waters along with an eagle silhouette. I tried to use a lot of colors to be bright and eye-catching.”

Liz Dippold, another artist that was featured through the project and owner of Country Chic Studio, was immediately excited about it when she was approached by the Elk County Conservation District.

“My entire life and upbringing has revolved around the PA Wilds and has fostered a tremendous personal interest in the outdoors and conservation,” Dippold said.

She said that her inspiration for her artwork for the Up Stream project came directly from the native aquatic species of Pennsylvania.

“The quality of water within the streams has a direct impact on the health of our native species that are struggling to exist. It was my goal to help the community realize that water is not filtered before entering streams via storm drains and that it travels directly into the environment.”

Dippold said that she used bold colors with lots of contrast in an attempt to demand the viewer’s attention. The final appearance of the pieces are quite whimsical, in an effort to catch the eyes of pedestrians. 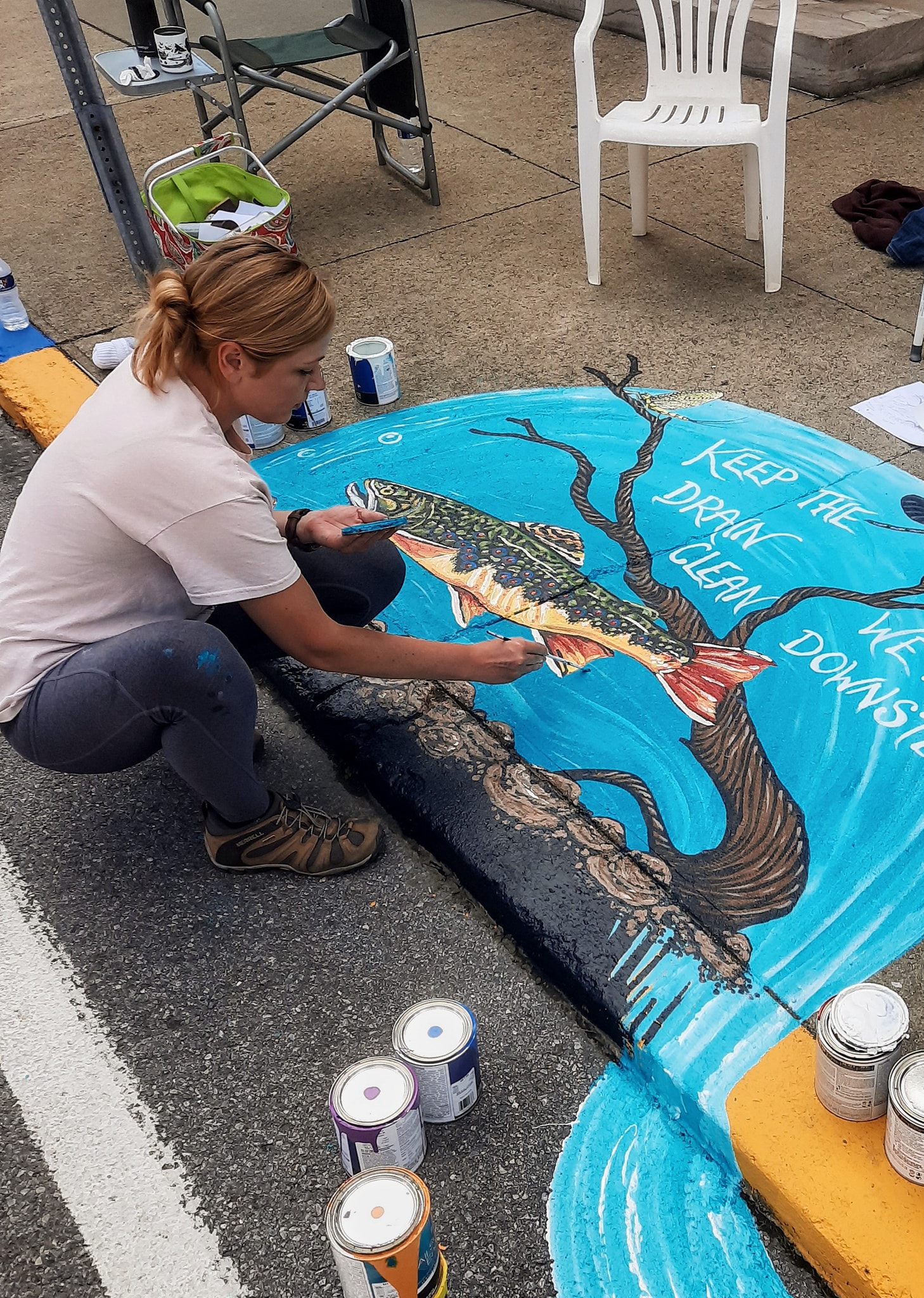 In each of the Wilds communities that feature a mural, the feedback regarding the project has been overwhelmingly positive. DeLong said that the murals really provide aesthetic value to the communities, and the outdoor recreation lovers within them really appreciate the work.

“A lot of locals are so happy to see some art and color in our city, Poland said. “Others love the message of conservation, and overall people just like seeing the artwork.”

Dippold said that, after a difficult year, it was refreshing for the community to see artwork manifesting in public spaces.

“The attention paid to the native, sensitive species of Pennsylvania has caught the eye of many serious outdoor and conservation enthusiasts. I am so incredibly thankful to have been included in this project.”

DeLong said that, if able to, the organization would like to continue this effort within other Elk County communities.

“If we can stop a few people from dropping their cigarette buts down the drain, then we’ve done a good job.”

Both Mickayla Poland and Liz Dippold are artisan members of the Wilds Cooperative of Pennsylvania. See their WCO Member profiles on the Creative Makers Directory.

CleanScapes shows how little acts can make a big difference.