When European settlers arrived in North America, they stepped into a world that was vaguely familiar, yet marked by many peculiarities. The carpet of trilliums that brightened the forest floor each spring was a curiosity, for this flower does not grow in Europe. Trilliums are native to East Asia and North America, reaching their highest diversity in the United States, particularly in the Southeast. Penn’s Woods is home to seven of America’s 39 species. Trilliums are among the most highly anticipated of the spring wildflowers, and fortunately we don’t have long to wait after a bleak winter.

The diminutive snow trillium (Trillium nivale; proposed PA Threatened) is one of the first flowers of the commonwealth to bloom, pushing through lingering snow by late March in southwestern PA. It prefers steep stream valley slopes on thin limestone soils where leaf litter is too shallow to smother its miniature leaves. Our smallest but toughest trillium, freezing temperatures won’t wilt its dainty white flowers or frosty blue-green bracts. 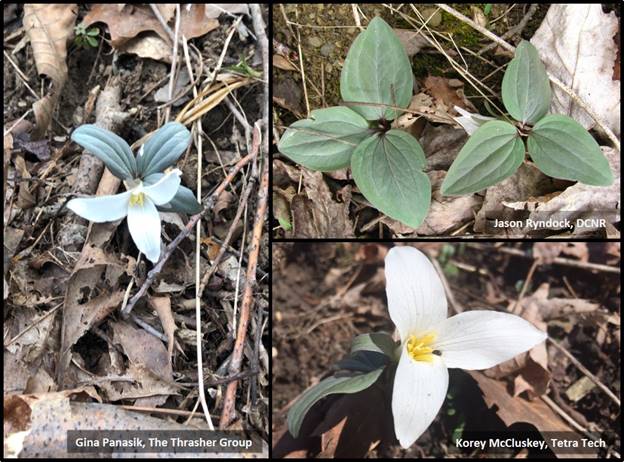 Perhaps our most charismatic and gregarious wildflower, large-flowered trillium (T. grandiflorum) is admired for its exquisite pure white petals, often dusted with brilliant gold pollen. As spring wanes, its flowers (a culmination of seven to ten years’ growth) fade to a delicate pink. Large-flowered trillium forms extensive colonies that slowly spread across rich woodlands, predominately in western PA. Like most trilliums, ants are its primary seed dispersers, enticed by nutritious globules of fat and protein called elaiosomes. 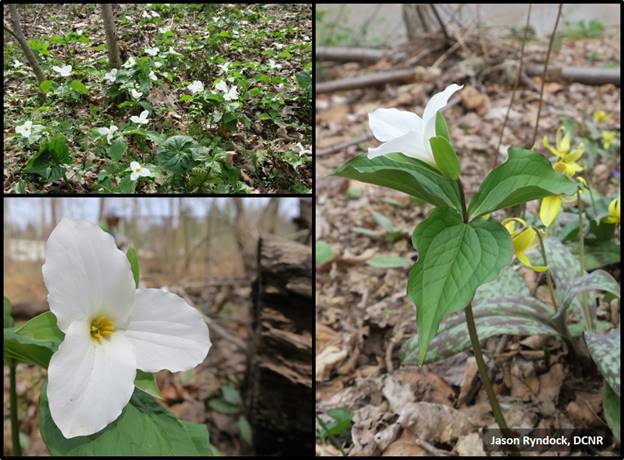 Arguably the most versatile of the group, red trillium (T. erectum) grows in various forest types on rich, moist soils throughout Pennsylvania. Despite its name, white and yellow-green color morphs are occasionally encountered. Rather than appeal to early spring bees, it attracts flies with a faint fetid odor and maroon ‘flesh-colored’ petals, attesting to another common name, “stinking-Benjamin”. 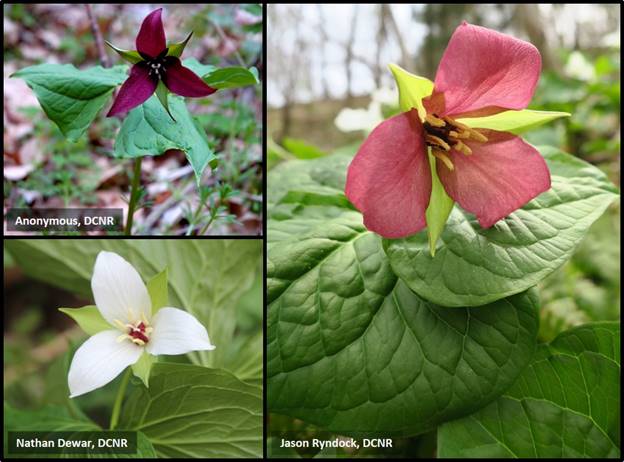 Nodding trillium (T. cernuum; proposed PA Threatened) is much too bashful to keep its head above its bracts, often going unnoticed. This species is associated with acidic wetlands and is usually found near forest seeps in the southeast quadrant of PA. Declined trillium (T. flexipes; proposed PA Threatened) is similar to nodding, except it generally keeps its chin a little higher above its bracts, though not always. To further frustrate botanists, it sometimes hybridizes with red trillium. Declined trillium prefers rich and often rocky wooded slopes chiefly in western PA. 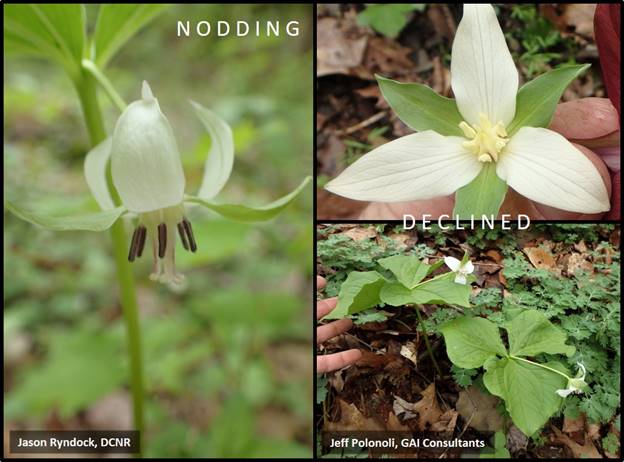 In cool, shady, and acidic forests of northern PA and higher elevations along the Allegheny Front, the unmistakable and stunning painted trillium (T. undulatum) enlivens the forest floor each spring with a scattering of white and magenta. Like snow trillium, its bracts are stalked, distinct even when not in flower, and often infused with a velvety maroon. 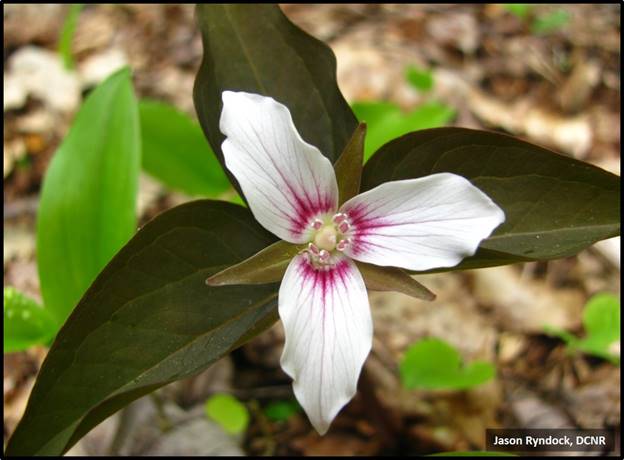 Our only sessile trillium (i.e., flower is unstalked and attached directly to bracts) is toadshade (T. sessile). Like red trillium, toadshade’s foul scent attracts flies and beetles rather than bees. Its floppy bracts range from light green to mottled. Toadshade is infrequently encountered in moist woods in western and southcentral PA. 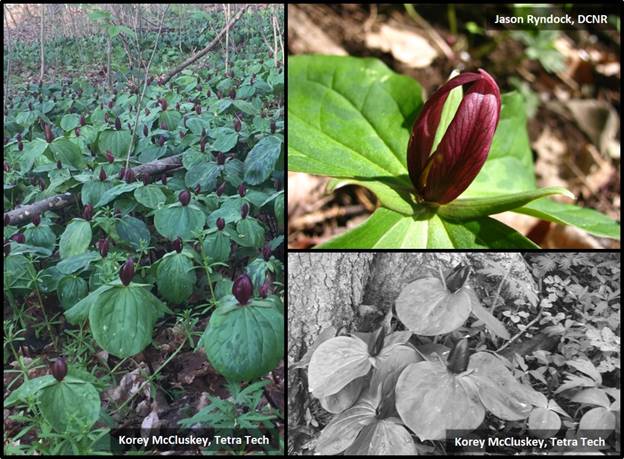 Trilliums are a reminder to stop and reflect with gratitude on the beautiful but fleeting moments of our lives. As much as you may want to take one home, please leave it be. A picked trillium is a dead trillium. Luckily, many of our species are available for purchase at online nurseries.

About the Author: Jason Ryndock, M.S., has worked as an Ecological Information Specialist with the Pennsylvania Natural Heritage Program since 2012, performing environmental review for the PA Department of Conservation & Natural Resources Bureau of Forestry in Harrisburg. His immersion in nature since childhood influences his research, creative pursuits, and hobbies. Jason received a M.S. degree in Biology from the University of Mississippi. This article was originally published in the DCNR Bureau of Forestry’s Forest Fridays e-newsletter.