Another Wonder of the Wilds — To the Moon and Back!

“We have ignition…and we have liftoff….liftoff with Apollo 14….” The words from NASA’s Mission Control on January 31, 1971, at 4:03 p.m. as Apollo 14 blasted off for our nation’s third successful manned-moon mission.

Apollo 14 Blasts off to the Moon – NASA photo 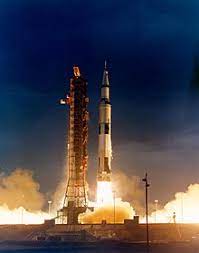 But who knew on that day back in 1971 that a seed carried to the moon aboard that spacecraft would end up growing into a fully developed, beautiful American sycamore in the Coudersport Area Recreation Park?

Aboard Apollo 14 were astronauts Alan Shepard, Edgar Mitchell and Stuart Roosa, who carried with him a variety of tree seeds: American sycamore, redwood, Douglas fir, loblolly pine and sweetgum. 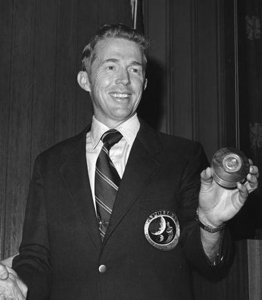 Roosa, a former U.S. Forest Service smokejumper, was fascinated as to what, if any, genetic changes would occur due to weightlessness in space once the trees were planted on Earth. Would they be able to sprout? This could be vital information for scientists working on creation of a self-sustaining environment in space.

Taking things a step further, NASA officials felt that the Moon Tree seedlings and saplings would make a nice gift for towns and cities across the United States for the celebration of the nation’s 200th birthday, our Bicentennial in 1976.

“Houston, We Have a Problem”

While Shepard and Mitchell walked on the moon, Roosa and the seeds orbited the moon 34 times in the Command Module Kitty Hawk. Sealed in plastic bags and then put into a 6-inch-long cylindrical metal canister, the seeds were stored in Roosa’s Personal Preference Kit, a small canvas bag each astronaut took into space filled with whatever they chose. They stayed by his side in the command module until splashdown on February 9, 1971.

Arriving safely back on Earth, NASA quarantined the seeds in an isolation chamber for 17 days. Everything the astronauts carried with them, including the seeds in sealed bags, went through a decontamination procedure. Unfortunately, the sealed bags burst due to air pressure difference. The exposed seeds scattered all about the chamber.

Concerns and questions mounted. Were the seeds contaminated? Would they germinate? Was the experiment a big bust?

The seeds were scooped up and rushed to National Forest Service laboratories in Placerville, California and Gulfport, Mississippi where they were gently sorted by hand. Many seeds did not survive, but after much tender-loving care, some germinated into seedlings and saplings.

Just in time for our nation’s 200th birthday in 1976, the Forest Service and NASA decided it was time to distribute the surviving seeds throughout the country. As a Bicentennial gift, Pennsylvania received four Moon Tree saplings which were sent to the cities of Philadelphia and York and the counties of  Bucks and Potter.

Thanks to the efforts of retired Susquehannock District Forester Robert Lewis, Potter County was gifted an American sycamore. Lewis got the seedling through his close association with Secretary of Pennsylvania Forests and Waters, Maurice K. Goddard, who had connections to the NASA folks. 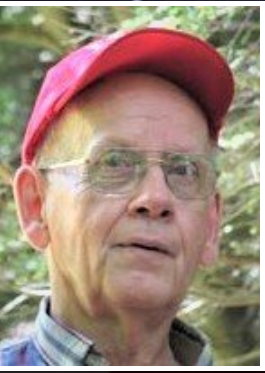 The only problem with the Moon Tree bicentennial give-away in 1976 is that nobody was keeping track of exactly where the seedlings and saplings ended up and whether they ever made it into the ground. It wasn’t until 25 years later that NASA began systematically tracking down the trees, thanks to NASA Scientist Dave Williams.

The Moon Tree Lands in Coudersport – But Barely Alive

Potter County’s Moon Tree was presented to the Coudersport community on Arbor Day, April 30, 1976 with a grand ceremony set for Courthouse Square, but the day dawned snowy and cold, too cold to put a sycamore seedling in the ground.

Worse yet, another life-threatening circumstance appeared. The little sycamore seedling was suddenly stricken with anthracnose, a common fungal disease, and was now teetering on the brink of death.

To the rescue came Coudersport’s Carol Patterson, who owned a tree nursery in nearby Colesburg. With tender loving care, Carol revived the tree, nurturing it in her greenhouse until it was healthy enough to plant. 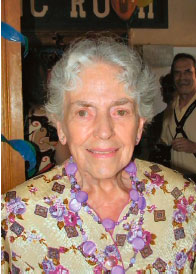 “The tree barely survived,” explained Carol, “We don’t have the best climate for sycamores, but this one did make it.” When the little sycamore was finally healthy enough, she moved it to where it now thrives, in Coudersport Area Recreation Park (CARP).

The planting of the tree occurred with little fanfare, and it wasn’t until Arbor Day 2011 that a ceremony at CARP took place under the direction of the Coudersport Lions Club.

There were 50 people in attendance, with guest speakers including Robert Lewis and former Potter Enterprise Editor Paul Heimel (now a Potter County Commissioner), who played a huge role generating interest in the Moon Tree and in its dedication. “I’m very thankful that people such as Stuart Roosa, Carol Patterson and my father-in-law, Bob Lewis, had the dedication and the foresight to preserve this special part of our history,” said Paul.

At the ceremony, Carol Patterson was presented a certificate of recognition by Lions Club President Lou Karija for her hard work in saving the Moon Tree. 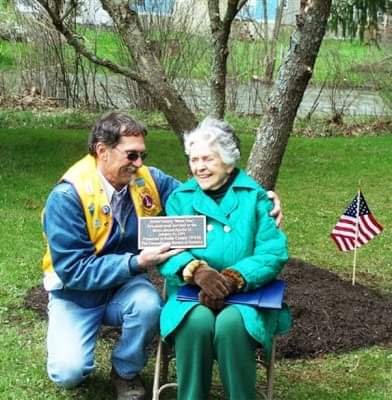 The Lions Club paid for a plaque that was to be placed at the base of the tree along with garden bricks and mulch, but unfortunately the plaque wasn’t put in place at that time. It was decided not to call attention to the little tree and let it flourish, undisturbed. The Moon Tree would live on, becoming taller, stronger –and virtually unnoticed for 10 more years. Karija held on to the plaque at his residence.

At long last, an Arbor Day celebration of the tree was held in the Coudersport Area Recreation

Park on Saturday, May 1, 2021. That plaque, donated by Karija and the Coudersport Area Lions Club in 2011, was mounted on a boulder and placed in front of the Moon Tree for people passing by to know exactly what it is and where it all started. 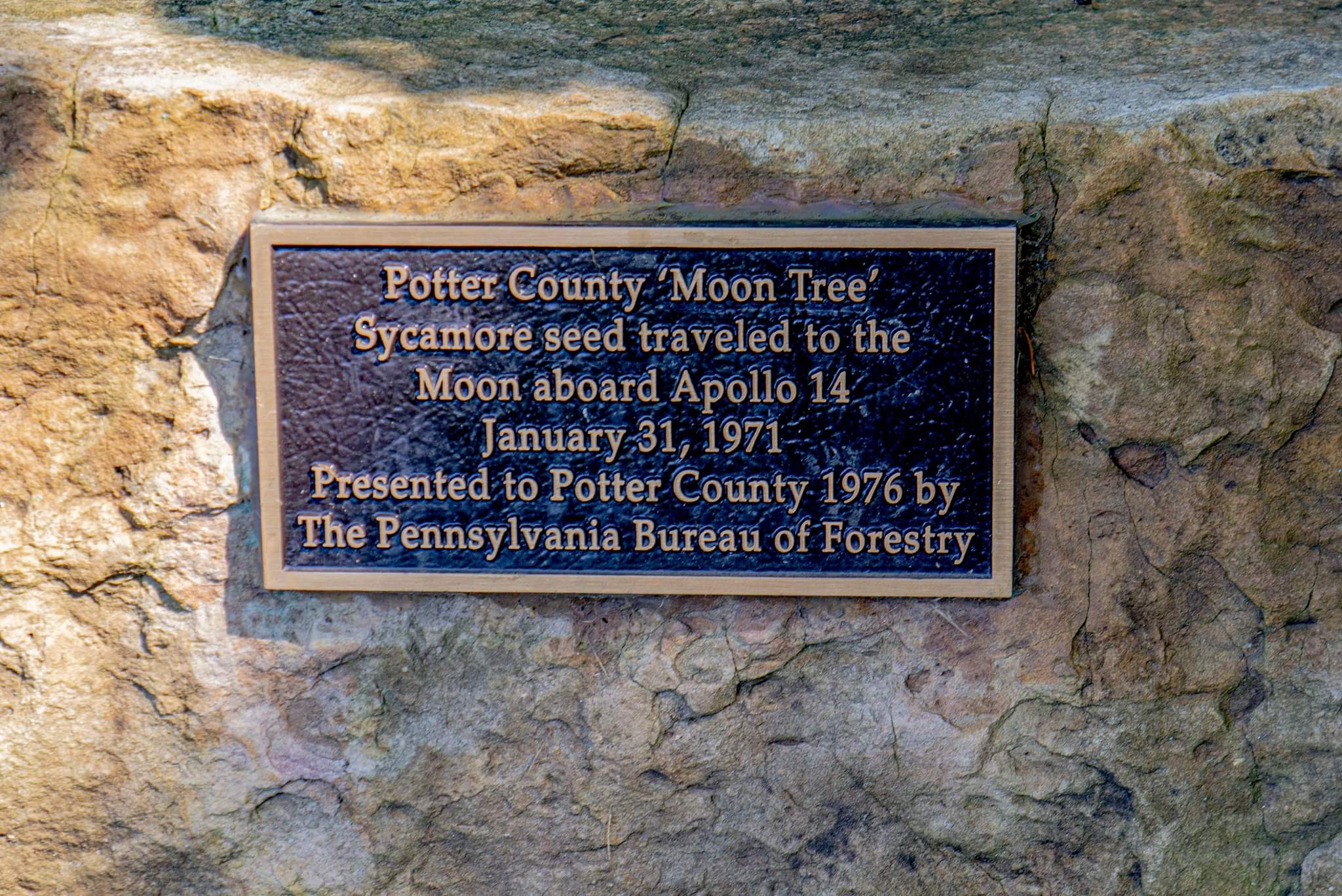 The community got involved in the celestial celebration. Coudersport Elementary School art students painted space-themed rocks that were placed around the tree, which added a nice touch. 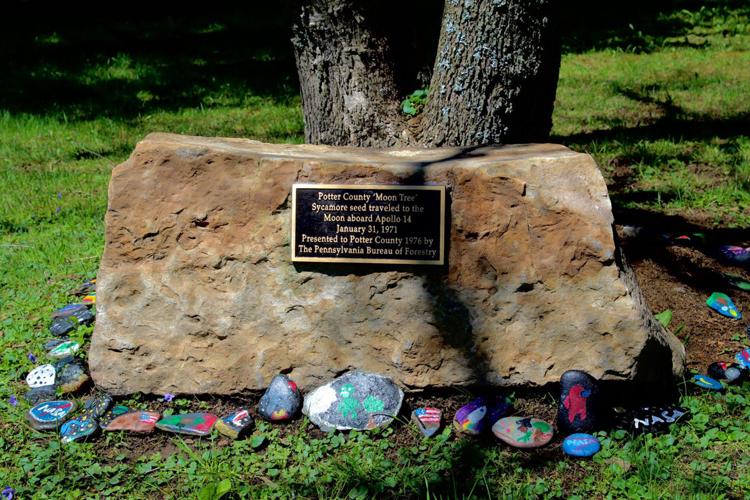 One of the rallying community forces working to revive interest in the long-forgotten Moon Tree and helping organize that May 2021 dedication was Coudersport’s Samantha Sallade.

“I am so proud and excited that I took an interest in this tree because it is now another wonderful piece of history for Coudersport to cherish,” explained Samantha, who said she got to work with folks in the community, such as Heimel, whom otherwise she wouldn’t have known.

“And I am glad to have gotten to know them and grateful for all their work and help with this project. This whole thing was many years in the making and it took a lot of hands,” said Samantha, the administrator of the official Coudersport Moon Tree Facebook Page. “That gorgeous plaque now sits right in front of the Moon Tree and is no longer ‘Coudersport’s best kept secret’.” 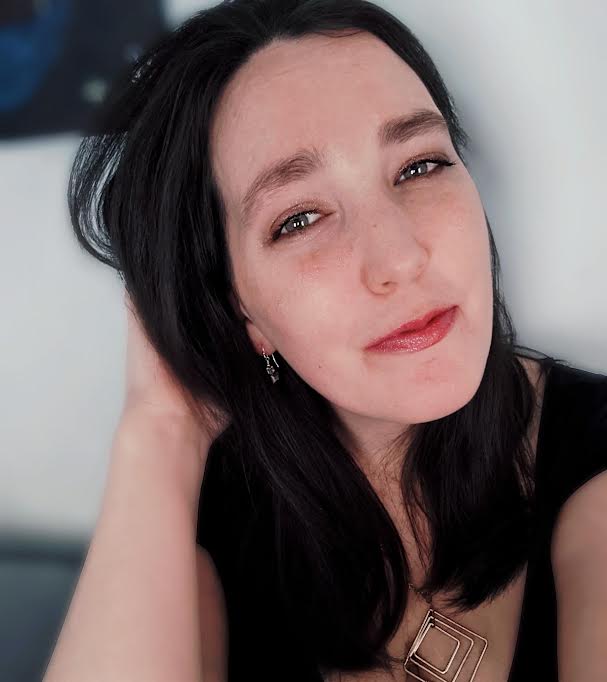 County Commissioner Heimel said not only is Coudersport’s Moon Tree educational, but it is historically significant as well.

“The care that was taken to save the tree from disease, to prune it and otherwise maintain it, provides educational opportunities,” said Paul. “It also marks a time when Americans were excited and united in support of the space program. We knew the names of several astronauts — they were celebrities — and watched proudly as Neil Armstrong set foot on the moon, beamed to millions of us on the black and white TV screen. It’s a shame that the space program receives so little attention in many households, school classrooms, and in the media.”

Meanwhile, the astronaut who started it all, Stuart Roosa, died in 1994, but his son, Jack Roosa, sent a letter which was read during the 2021, ceremony:

“My father once said that these trees serve as a living legacy and would commemorate one of the greatest achievements of man – and that was our Nation’s effort to put Americans on the moon,” Jack Roosa wrote. “He also said that these trees would outlast every single individual who took part in the Apollo program. And he was right in one sense – and that is, my dad passed away in 1994 – but the trees are still flourishing.

“I am not sure how a Moon Tree ended up in a small town in Pennsylvania – but I am so glad that it did. It seems like the tree is in good hands,” he wrote. “I think my father always knew that these trees would serve as a long-lasting, living reminder of mankind’s greatest achievement — the manned missions to the moon. Some of these trees will be here 100 years from now. By then, I believe we’ll be planting Mars trees right beside them.”

It has been more than 50 years since Coudersport’s Moon Tree began its adventure: 34 trips around the moon and back, and then to Coudersport. Today, the tree is now included on the NASA moon tree registry thanks to NASA scientist, David Williams.

Everyone agrees that the most important thing is that it survives in a park where people from the community visit every day, up until now not knowing they were walking past a tree whose journey to Coudersport took it into the far reaches of space – 34 times around the moon — and back. 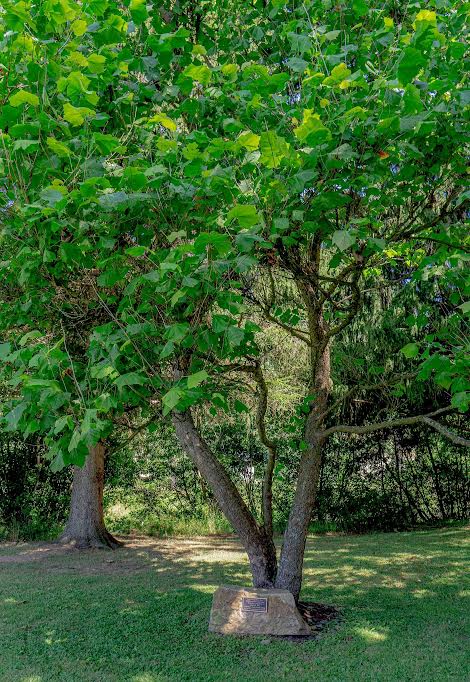 U.S. Route 6 – From Wellsboro to Warren – to The Wonders of the Wilds!