(As previously published in the Daily Press)

ST. MARYS – Ghouls just want to have fun! In St. Marys, ghosts on Halloween, and at other times of the year, want to play a game of hide and shriek!

According to several St. Marys business owners, their old buildings still have a few “customers” who have been hanging around, perhaps trying act as “hauntrepreneurs.”

Elk County Real Estate Broker/Owner Leah Whiteman said she and other associates have experienced many strange events in their offices at 39 North St. Marys Street since moving into the old building in 2010. The historic building was formerly the site of the Koch, Lion, Spafford and Dimitri building and the St. Marys Post Office around 1904, according to the Historical Society of St. Marys and Benzinger Township.

Many Elk County Real Estate agents and staffers have reported hearing footsteps on the second floor and footsteps coming down the wooden staircase when they knew they are alone in the building.

“A few of them have said they’ve heard footsteps going across the upstairs floor and coming down the steps when nobody has been up there,” Whiteman said. “I’ve never heard the footsteps but others have.”

While the sounds from the second floor have been sporadic over the last 12 years, she said the strange occurrences seem to have ramped up lately.

Photo at right by John Schlimm. Elk County Real Estate agents and staffers have reported hearing footsteps on the second floor and footsteps along the wooden staircase when they knew they were alone in the building. 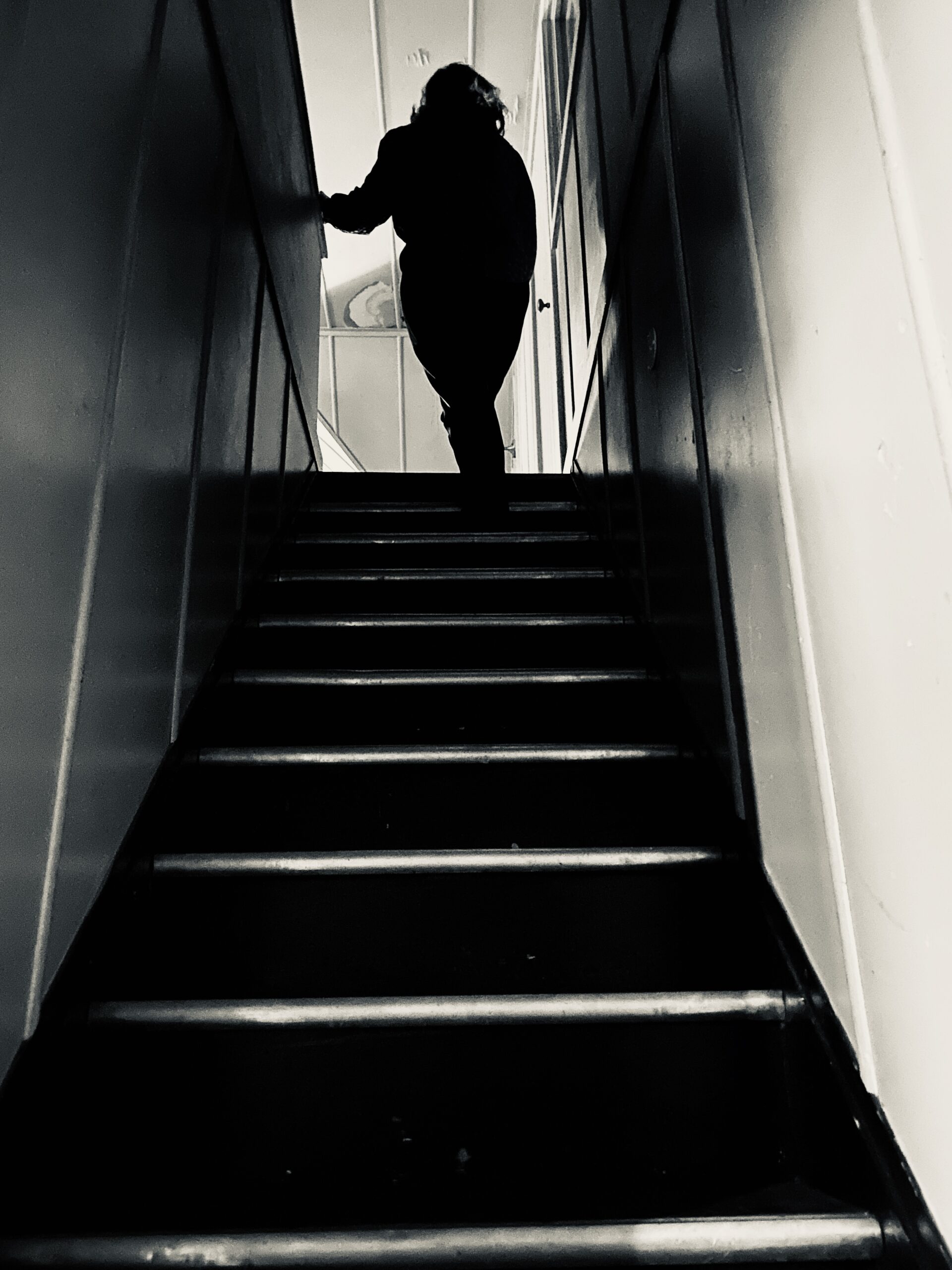 The most recent, unexplained occurrence happened the day after John Schlimm, who has helped facilitate this series of haunted St. Marys articles, was at their office asking Whiteman and her team if they believed that their space was haunted.

The next day, a staff member was filing documents in the back board room near the door when she heard a noise and looked across the hall into the adjacent bathroom. To her surprise, while the bathroom was empty, she saw the roll of paper towels on the wall spinning and spilling into a pile onto the floor.

“That paper towel holder doesn’t roll easily. It’s tough. You have to actually pull on it,” Whiteman said. “She heard a noise, so she looked over toward the bathroom and the paper towels were unrolling. She made a noise and the agent whose office is directly across the hall from the bathroom got up to look and there was a pile of paper towels on the floor. They both saw it unrolling.

Not long before this incident, when it seemed that most of the associates in the office were experiencing a batch of bad luck, Whiteman and her staff member decided to sage the building.

“Negative things were happening to everybody in the office,” she said. “We started in the back and blew the smoke into every corner. We did each office individually.”

When the two went up to the second floor to sage the offices there, they were just about finished when they came to the last office and as they saged over the final desk in that office, the sage burst sending glowing embers all over the desk.

“We both jumped,” Whiteman said.

Years before, Whiteman had another experience when showing the historic home at 414 South St. Marys Street, which is now MJ Studios hair salon, to a prospective buyer. When they got to the third floor of the vacant home, which was still filled with the former owner’s belongings, both she and her client felt a chilling uneasiness about being on that floor.

“When we got up to the third floor, the gentleman to whom I was showing the property, he and I instantly felt the same thing. It was like a weird vibe,” she said. “We just looked at each other and said, ‘Did you feel that?’ and then we turned around and we were outta there. We never talked about it again.”

Matt Lawson, who is now the owner of the home and MJ Studios, said while he has never had an encounter while living there, his salon customers have. On several occasions, clients have come from the back of the first-floor, multi-room salon space where the waxing area currently is into the front asking Lawson who the man is walking around back there.

“I’ve had clients say they’ve seen a tall man walking back and forth from the back room into the kitchen,” Lawson said. “One client asked, ‘Is there anyone else here?’ And I said, ‘No, it’s just us.’ But of course, I went to the back door to just check and I didn’t see anything.”

When Lawson first moved into the home, he and his sister were sitting on the back patio when his three-year-old nephew came outside crying saying he saw a man inside the house.

“He said he had seen a man in the writing room, which is now the waxing area. He was three years old, so he wouldn’t have known anything about that. It was really bizarre,” Lawson said. “But it was never really a scary thing.”

Lawson’s home and business are not the only combination residential/business spaces that seems to be haunted in St. Marys.

Andrew Mohney, manager of Tablespoons Cafe & Deli at 10 Erie Avenue, said he has often shared the story about the ghostly female visitor in his building, which was once the Arcade Hotel in the early 1900s and later housed Smith’s Sport Store.

Years ago, Mohney was living on the third floor of the building watching the Marilyn Monroe movie, “The Prince and The Showgirl.” He had just worked a third shift and was up late watching the movie when he looked up to find a silhouette figure in the hallway attached to his room.

“I just happened to have a feeling and I glanced up and there was this female figure in like a 1910ish, 1920ish Edwardian-style dress completely blacked out standing there looking at me. There wasn’t a lot of detail, but I could definitely tell she was dressed in a poofy-style gown and it was definitely a female,” he said.

Photo at right by Beth Koop. Tablespoons Cafe and Deli Manager Andrew Mohney said he has had quite a few experiences with a ghost he playfully named Elsie Marina, Marilyn Monroe’s character’s name in the movie, “The Prince and The Showgirl.” 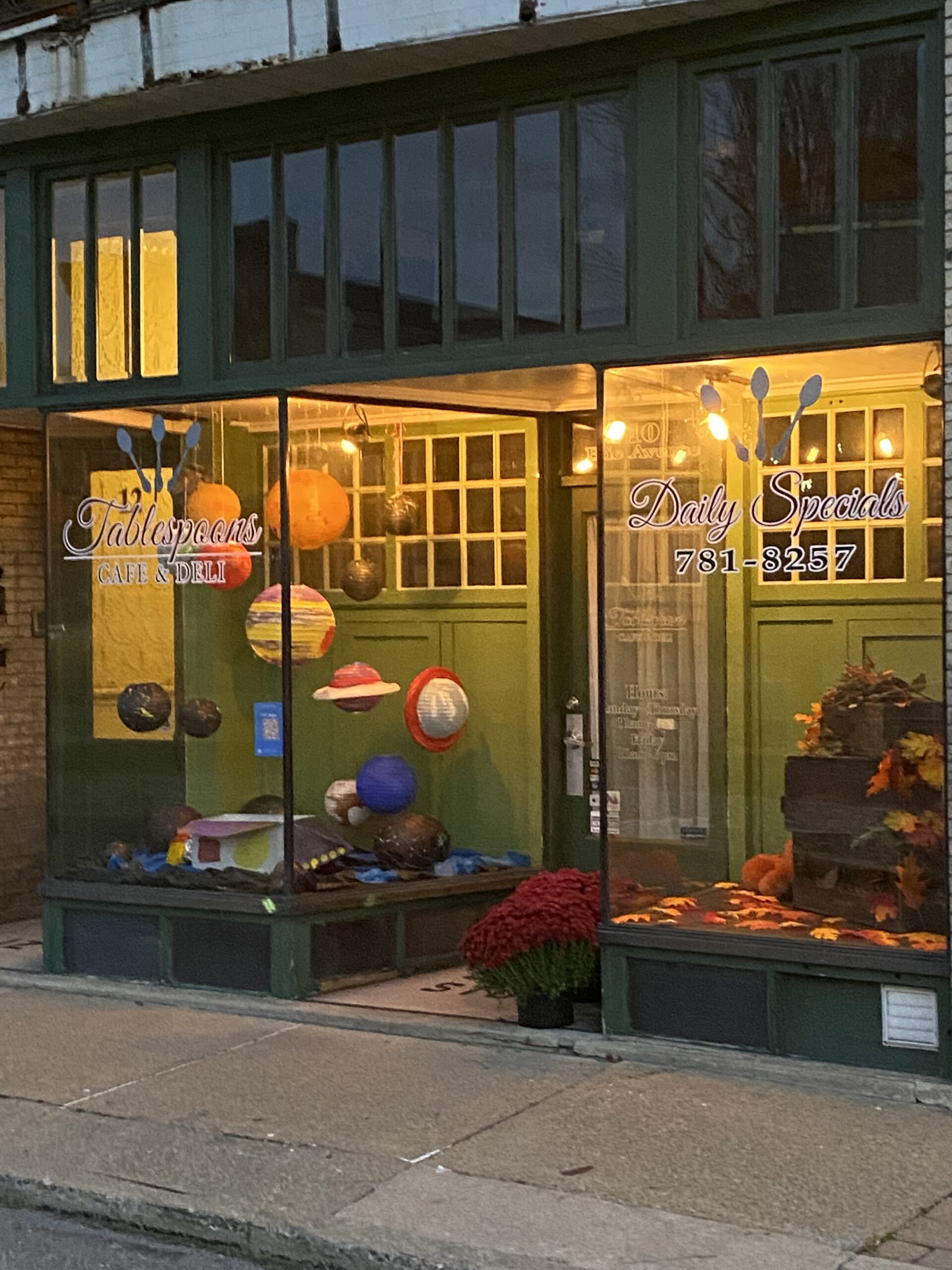 The figure was present for about five to ten minutes until she just disappeared and he never saw the figure again in the building. However, as weird occurrences would take place afterward, Mohney decided to refer to the ghost as Elsie Marina, which was Marilyn Monroe’s character’s name in “The Prince and The Showgirl.”

While he blames Elsie for things like scissors and Phillips-head screwdrivers going missing regularly, he said what couldn’t be explained was why one day when he went to the second floor to switch laundry in the laundry room the door to the room was not only closed but also locked.

He explained that there was no reason for any of the five doors along the hallway to be closed, let alone locked as the second floor was empty and had been gutted for renovation. What was even more bizarre was that to lock and unlock the old doors, it required a skeleton key. Mohney was the only one who possessed the skeleton keys to the doors and he knew he hadn’t locked this door.

He went quickly back downstairs to the first floor to retrieve the skeleton keys and returned to the second floor within just a few minutes, returning to find the laundry room door wide open and the other doors along the hallway were now closed and locked.

“So I opened all those doors, rotated laundry, and went about my day. I went upstairs about six or seven hours later and the laundry room door was locked again,” he said.

Mohney said his cousin, who lived with him on the third floor during that time, didn’t believe his stories about having run-ins with Elsie until his cousin had an experience of his own.

His cousin, who was more into science and a logical explanation for things, asked if he had invited people into the building the night before.

“He’s an engineer. He’s so into science. He was like, ‘There’s a reason for this stuff.’ And I said, ‘No, there’s not. There’s a ghost who lives here. It’s not scientific,’” Mohney said. “He finally looked at me one day and asked, ‘Did you have people in the building last night after midnight?’ I said, “No.” He said, ‘Okay, that was weird then.’ I asked, ‘What did you hear?’ And he said, ‘It just sounded like there were people just walking back and forth in the hallway.’ I said, ‘I’ve been telling you that for two years!’”

Editor’s note: This is the second of three light-hearted St. Marys “ghost” stories featured in the month of October.

Beth L. Koop is a native of Johnstown, PA. She returned back to Pennsylvania after living 25 years in Florida where she was a reporter covering everything from community politics to alligator hunting. Beth is formerly the Editor/Writer of Butler County Business Matters in Butler, PA and is now the Editor of The Daily Press, and The Ridgway Record in Elk County and The Kane Republican in McKean County. She has a Bachelor’s Degree in Communications from Clarion University of Pennsylvania and a Master’s Degree in Communications from Indiana University of Pennsylvania. 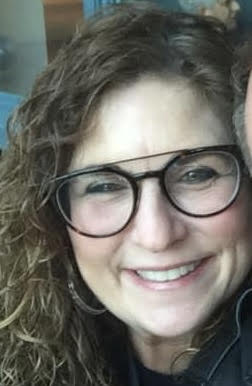