As anglers across the Keystone State anxiously await the trout opener, some of the finer details pertinent to having a successful day can get lost in the mix.  In the midst of packing deer steaks and negotiating time off work, it’s easy to overlook some fishing-related components that might have fallen by the wayside since last year.  From personal experience, it’s much more beneficial to deal with those things now than in the fever pitch of racing to trout camp daydreaming about all of the fish that will find their way into our nets on opening day (April 13 in the PA Wilds). 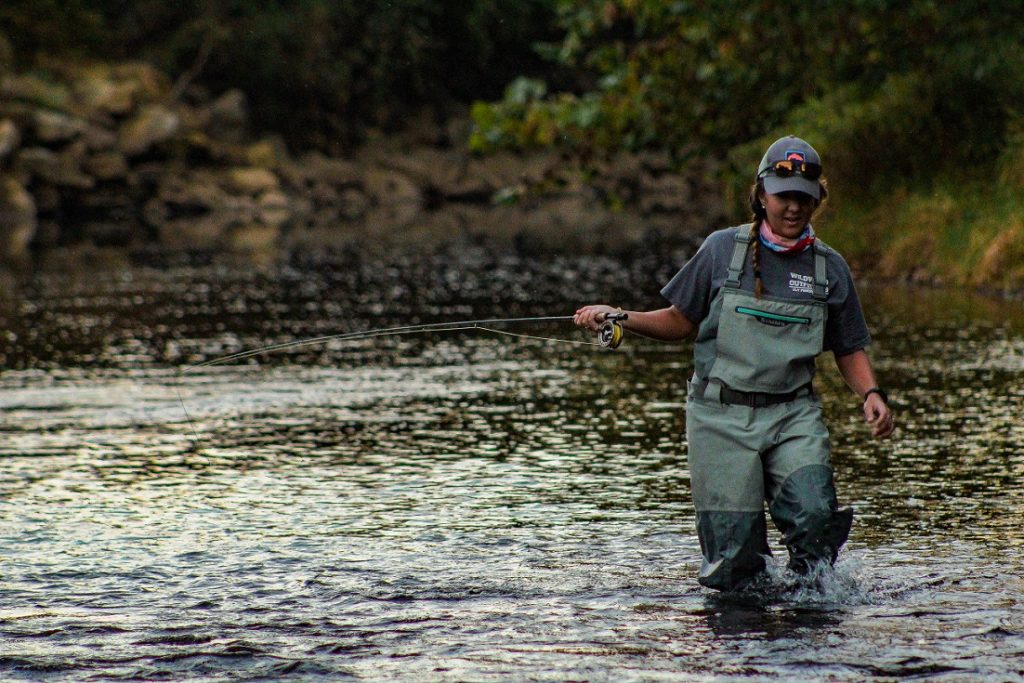 For the fly fisher, the term “line” can have a few different meanings.  Fly line, leader, and tippet all have the distinction of being called “line” while being quite different from each other.  Everything we aim to do on the stream hinges upon our line, whether that means our leader is the correct length or the tippet is properly attached to our flies.  What can sometimes get lost in the shuffle from year to year is the weakening of said lines. Idle tippet and leader can develop dry rot, which greatly weakens the strength of each. More than a few half spools of tippet have been pitched because of structural integrity issues after spending the winter sitting idle in a storage tub.

Some folks never stop pursuing trout regardless of month or weather conditions, but those that stow the rods and reels come October only to revisit them in April will want to check the status of their line.  The week of an outing can be a bit hectic, so sometime before that it’s best to dust off all of the gear and make sure everything is in working order. Grab the leader and tippet and build a rig or two just like you would on the trout stream.  If the line fails after three or four knots, maybe it’s time to get some new stuff! It’s much better to reach that conclusion a few weeks prior to the trout opener rather than the morning of after a nice trout snaps us off. 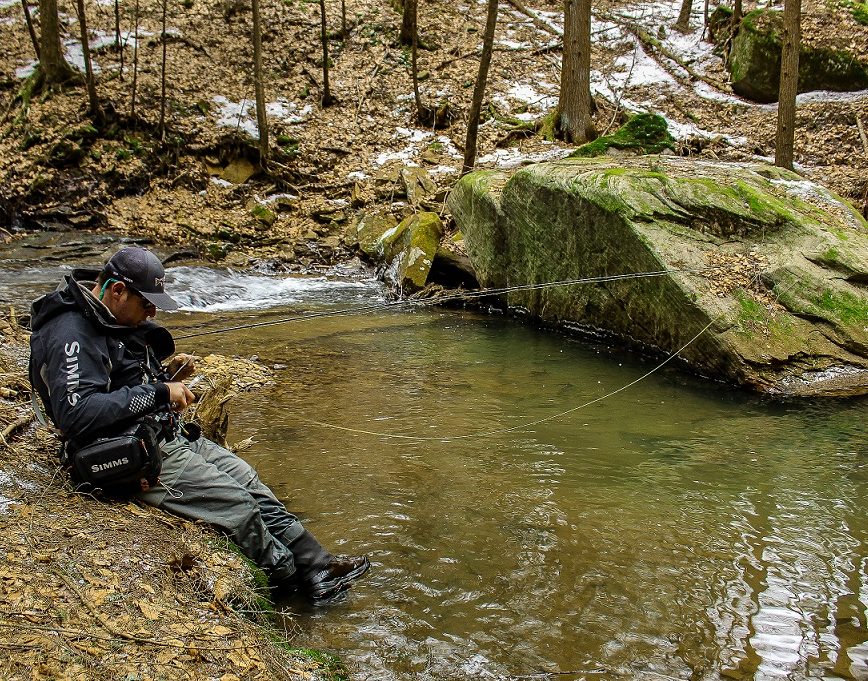 Fly fishers are notorious gear hoarders, almost to a fault. Boxes upon boxes of flies adorn our packs and vests even though only a handful are used on a given day.  Call it a security blanket, call it foolish, but however we cut it there’s no real reason to carry so much stuff! Early in the season (April and May especially) focus on just the flies that we know will work.

It’s possible to get away with only carrying a box of heavy nymphs geared towards high water and a few streamers for the over zealous fish participants. There’s no denying that throwing grasshoppers and large drakes is fun, but maybe leave those flies at home for the first month of the season.  The odds of experiencing a green drake hatch in April don’t warrant carrying around an entire box of their imitations all day. It will be worth it when we aren’t fumbling through gear trying to find that tungsten bead prince among a dozen identical fly boxes!

For most, time is on the side of the angler.  Everyone knows when the opening day of trout season starts, and most of us know what general area we will be fishing.  Someone pursuing fish from a camp in Benezette is probably going to be fishing different streams than an angler in Wellsboro.  The trouble with opening day is the crowds can be suffocating, but since most know their destination beforehand some planning can be done to combat this! 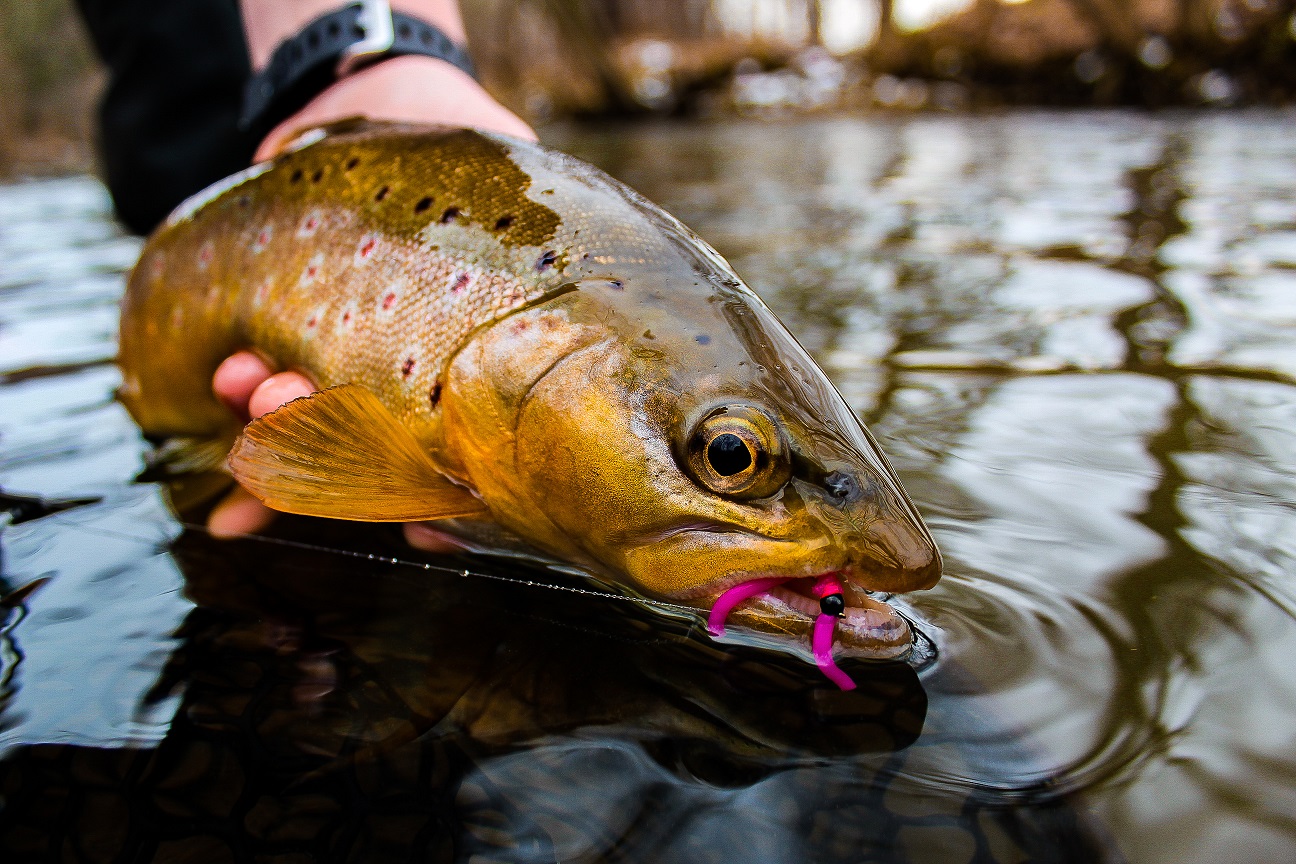 Head to camp sometime prior to the first weekend and do some exploring.  Whether that be referencing a map to find some more obscure stocked water or hiking into some hard to reach wild trout streams, there are remote opportunities to be had for the ambitious fisher!  It’s not only productive to find new waters a little off the beaten path, but it’s also an excuse to get away from it all and into nature an extra week or two before trout season begins. Not to mention some exploratory trips can also turn up some unintended results in the form of deer sheds and mushrooms!

As excitement for trout season continues to mount, do the little things now to make sure 2019 is memorable for the right reasons! Don’t make it the year you lost that big fish to rotted line or or got pushed out of a favorite stream because of the crowds. Put in some time now, do the prep work, and the rewards will be a fantastic start to a year’s worth of fun.

For those looking to take in the opening day of trout season in the PA Wilds, licenses can be purchased online from the Pennsylvania Fish & Boat Commission here.

About the Author: Nick DelVecchio is a freelance outdoor writer and the owner/head fishing guide at Wildwood Outfitters.  He guides anglers of all skill levels on the many trout waters in the PA Wilds, providing all of the necessary gear on trips customized for each guest. At right, he is pictured (left) with one of his successful clients. For more information on guided fly fishing trips with Nick, visit wildwoodoutfitterspa.com! 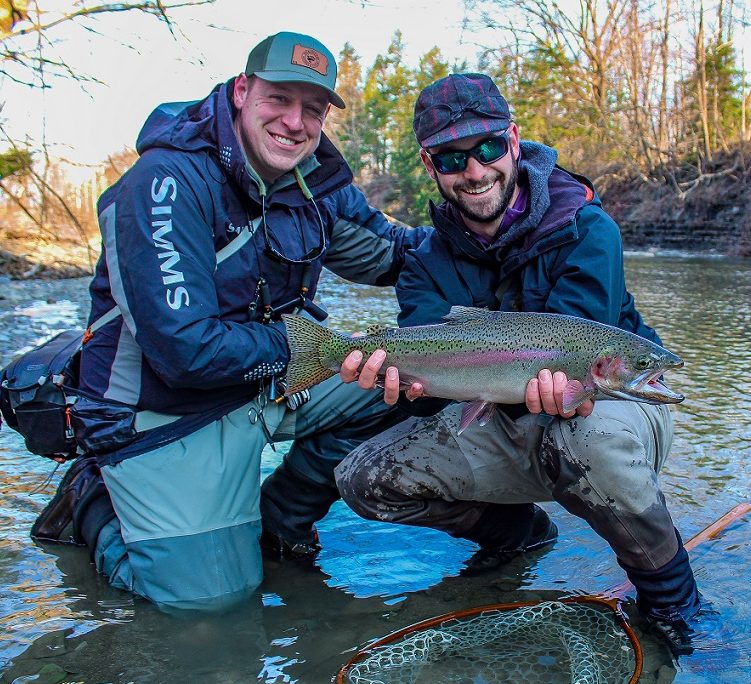 Fall fly fishing on Kettle Creek in the PA Wilds

Throwing Dries on a Blue Line in Clearfield County