Centuries ago, the Native Americans referred to the Susquehanna River Valley as “Otzinachson.” Some sources state that this meant “The Demon’s Den,” and that the Natives believed the area to be filled with ghosts and curses. Next thing you know, the settlers came, and someone decided to build a pleasant walking path there.

As far back as Lock Haven’s history records, floods have been a problem. (That could have something to do with all the stories of curses.) Town founder Jeremiah Church grew up on a property bordering a river, and he liked that. All of the communities he later founded were beside rivers. If there was a place prone to flooding, Jerry Church wanted in.

Obviously, having a flood every few years is not the most sustainable of plans. So after the 1972 flood, the city began discussing the possibility of putting a levee in. No action was officially taken, however, until the early nineties, when the current levee was proposed.

It was controversial. Individuals and businesses took sides, and some people lost their homes, which stood right where the levee was to be built. One Lock Haven mayor ran for office, and won, on mostly an anti-levee platform, but lost the main battle, and construction on the levee was begun.

The Army Corps of Engineers began construction in 1991. The project required a couple of years and two archaeological digs. Native American artifacts and remains were discovered in the Memorial Park area on the east end of the levee, and close to the west end of West Water Street, and construction had to pause until a dig was completed. Most of the artifacts are kept at the State Museum in Harrisburg.

The project was completed in the fall of 1994, and in October, an opening ceremony was held. The levee was named after William Clinger, a member of the House of Representatives in Pennsylvania. Clinger was born in Warren, up in the Allegheny National Forest and Surrounds Landscape. 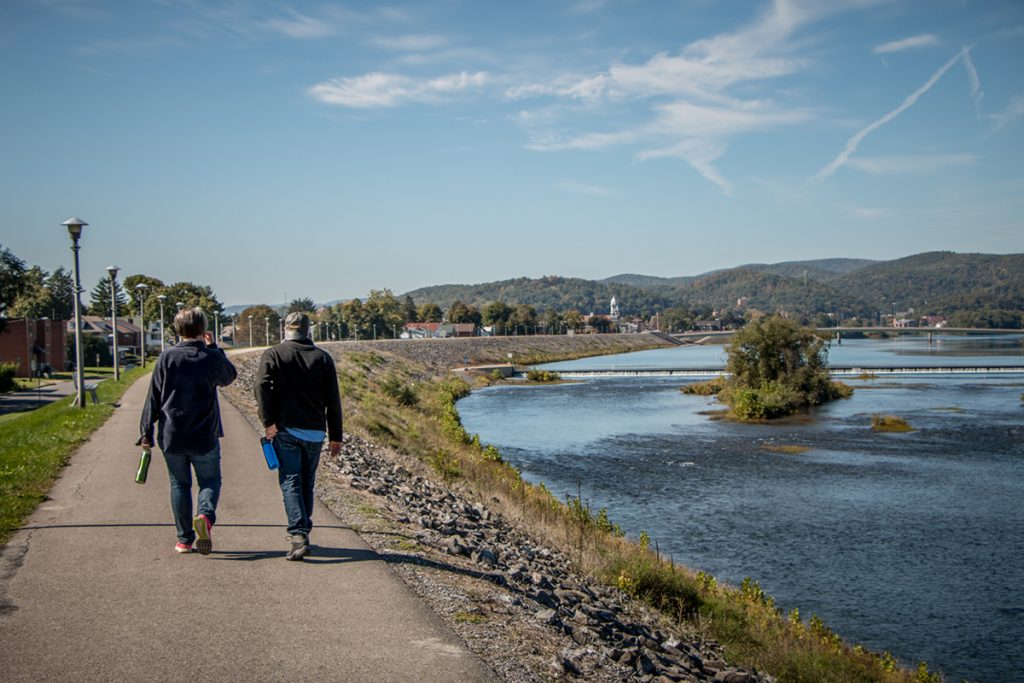 One of the best choices of this project was the decision to place a walking path along the top of the levee. Running for approximately two and a quarter miles, this makes a nice leisurely stroll along the Susquehanna River. Or a run, if you’re more determined to get into shape than I am.

Since its construction, the levee has protected Lock Haven from floods several times. Soon after completion, the river rose in 1996, and the levee did what it was there to do. A headline on the front page of the local newspaper declared “IT WORKED!” Today, a monument stands nearby on the corner of Jay and Water Streets, listing the known historic floods that predate the levee.

If you walk along the Riverwalk, you can also see signage that describes the history of the sights you pass. (Full disclosure: I was on the committee to place the signage there, and I wrote some of it.) The signs give details on some fascinating historic spots, such as the peak known as Peter’s Steps, the fire that destroyed the Jay Street covered bridge, and the history of Lock Haven University.

Situated in the I-80 Frontier of the PA Wilds, one end of the levee takes travelers to the Elk Scenic Drive, but the entire levee runs along the West Branch Susquehanna River, which is also a great place to swim, fish, or boat. It stretches between Lock Haven University and Memorial Park, a nice place to sit and rest. An amphitheater lies in the middle, where the city of Lock Haven puts on a summer concert series. All in all, it provides opportunities to participate in various activities, more than you’d think a simple flood protection plan would. And is a great way to spend your time when visiting Lock Haven in the PA Wilds.