Let’s begin by stating the obvious: You can’t have a ghost without a death.

I mean, it stands to reason. Every good ghost story begins with a death. Usually a traumatic death of some kind; that’s what creates a ghost. Violent death, young death. Sometimes a murder.

Like the murders in the Cook Forest and the Ancients landscape in 1940. The book “Ghosts! Of Pennsylvania” by Lawrence J. Gavlak details a family from Knox, in Clarion County, who moved into a haunted house. The woman living in the house stated, “Her family has had so many haunting experiences that she didn’t know which happenings to outline first.” As Gavlak states, the experiences include the sound of footsteps in the hall, sightings of a ghostly little boy, and the sound of disembodied voices. The activity seems to peak in August, for some reason.

The house is along the Clarion River, on what was once farmland. It was built by a local farmer named George Alt about 1938. Alt owned the neighboring farm, so he built a new home and sold off part of his land to another family—The Wentlings.

The story behind the haunting involves the Wentlings, and a horrible murder that took place in the house over eighty years ago.

It was December of 1940. The Wentling family was going about their day. Twelve-year-old Reuben “Ronald” Wentling had just changed into his Boy Scout uniform to attend his meeting that night. This was interrupted by the arrival of Frank Dearolph, a relative who lived nearby.

Mental illness seems to have run in the Dearolph family. Many years previously, in 1912, Dearolph’s father had killed his wife and daughter before killing himself, leaving Frank as the only survivor. Dearolph appeared to have blamed Reuben Wentling Senior for the crime; according to a 1940 article in the News-Herald, Wentling was the one who found the bodies and reported the crime. Reuben’s sister was married to Frank Dearolph’s father.

The evening was said to have begun peacefully, with Dearolph having dinner with the Wentlings. What happened next was never fully clarified, but an argument seems to have escalated. Dearolph shot young Ronald in the head. Ronald died immediately as the rest of the family fled.

Dearolph pursued them, shooting Reuben Senior in the left side. The family ran upstairs, climbed through a window and onto the porch roof, where they climbed down and ran for help. They made it to the farm of Herman Fritz, about a quarter of a mile away. Fritz notified some neighbors, and local merchant Clyde Garris telephoned the Clarion County sheriff.

Reuben was rushed to the nearest hospital, where he died the next day. After a search, Dearolph was found and arrested. In jail, he was said to be “quite relieved” and ate and slept as if he didn’t have a care in the world. He was sentenced to life imprisonment at his trial in October of 1941.

The Wentlings are buried in Saint Paul’s Union Cemetery, in Clarion County. The house stood empty for some years before being purchased by the current owners. The owners have reported footsteps in the upstairs hallway at night, which continued until the woman asked them to stop.

As I mentioned above, the haunted activity seems to peak in August. Though the Wentlings were killed in December, a case could be made that the incident began further back, with the 1912 murder-suicide of the Dearolph family. And that happened in August. 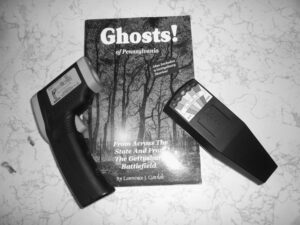 There are many reasons to visit Cook Forest and the Ancients. But if you’re into history and the paranormal….Well, that’s available, too.