Wander around the deeply shaded woods in the heat of the summer and you may come across a rather spooky looking organism emerging like a zombie from the soil. It is ghostly white, sometimes marked with pink or a deep blood-red, and when dried turns a deathly shade of black. With their scaly, waxy stems and nodding heads, they are plants in the same family as rhododendron, azalea, cranberry, blueberry, and heathers – Ericaceae. Their eerie habitat of relative darkness and spooky common names “ghost plant” and “corpse plant” make this the perfect Halloween plant, even if found months before.

To many people, ghost pipes (Monotropa uniflora) look more like fungi than plants. This parasitic, white-flowering plant (also commonly called “Indian pipe”) is a perennial that blooms from June through October. It succeeds only under specific biotic conditions — soils containing a complex fungal community and usually bearing pines.

Ghost pipes do not produce chlorophyll and thus cannot do photosynthesis, instead tapping into roots (called hypha) of the mycorrhizal fungi that benefit forest trees by aiding in mineral absorption. This symbiotic relationship provides an alternate source of photosynthetic sugars for the ghost pipe. 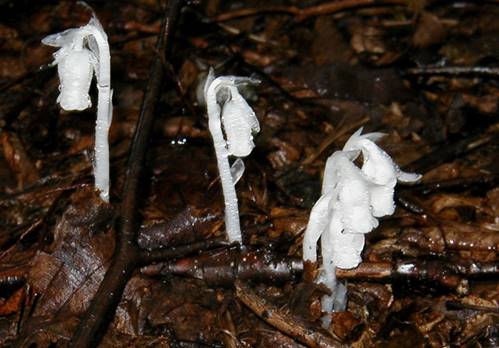 According to Cherokee legend, ghost pipes originated from human selfishness. The story goes that chiefs of warring tribes came together in council to try to settle disputes over hunting and fishing territory. They convened and continued to disagree, despite smoking the peace pipe together for seven days and nights. The “Great Spirit” then transformed the chiefs into the white flowers of the ghost pipe.  The myth further explains the flowers grow only where relatives or friends have quarreled and still hold unresolved differences.

Kristina Allen was formerly employed by the PA Department of Conservation and Natural Resources, and now is a residents of Boise, Idaho. Ms. Allen is credited with the initial development of DCNR’s PA Plant Conservation Network. During her time with DCNR, Ms. Allen showed a strong passion for plant conservation and was instrumental in forging alliances with private landowners, botanical clubs, institutions of higher learning, and other nonprofits. This article was originally written for the PA DCNR Bureau of Forestry’s Forest Fridays e-newsletter.