I’d heard rumblings of famed camping trips from my wife’s childhood—thunder and lightning and all sorts of weather-related drama graced the Borst family skies. I’ve taken to replacing the “B” with a “W” but it’s no joking matter.

Early in our courtship, my wife and I inched our way along the I-80 Frontier through some freak winter storm. It hasn’t stopped there. (*SPOILER ALERT* Marrying me and taking my last name hasn’t been able to lift the curse of our weather-related luck.)

Fast-forward eight years and two kids later, which brings us to a late-summer Friday. The Great Deluge of ‘18 had kept us from camping the previous weekend. Since this was my wife’s last free weekend with the family before working twelve-hour days for two weeks straight, nothing was holding us back.

Which brings us to Friday morning. I returned home from my shift at the coffee shop and we packed all morning in the rain. The foul weather had us in an even fouler mood. We were taking my mother along for the evening to camp with us and we realized (in the rain) there wouldn’t be enough room for her and us and all the camping gear. So two cars it was up to Hills Creek State Park in—you guessed it—the rain.

After an obscenely long drive in the rain (I’d never driven the road), lo and behold we pulled into the park—and it stopped raining.

You could feel the quiet on the ride in, though it could just have been the rain keeping people away. We saw two fawns grazing as we rounded a curve.

We had a hard time finding the campsite, though. My wife arrived a bit later and got lost as well. Thankfully it wasn’t my directionally-challenged nature getting us into trouble this time.

While my wife set up camp—it’s relaxing for her—my mother and I took the kids to a nature center we spied while lost. Closed until the evening, but it didn’t stop us from enjoying the curated wildflowers and watching the butterflies, bees, and even a hummingbird that looked like a bee! Our youngest (at 2) spent the next half-hour or so running up and down the steps and handicap-accessible ramps while my mom took the elder on a long walk to the park. 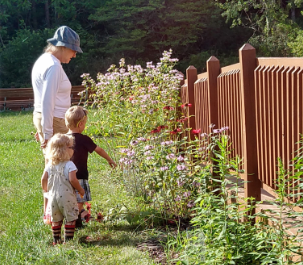 We’ve got one of those Harry Potter-style tents, so the five of us slept rather comfortably with the exception of me rolling downhill into my wife all night.

Despite the lack of sleep, we arrived at Pine Creek Outfitters in Ansonia, just outside of Wellsboro, about a quarter to nine Saturday morning to get everything settled before the shuttle to Blackwell. You see, PCO offers rentals and guided paddling, rock-climbing, biking and hiking adventures in the Pine Creek Valley & PA Grand Canyon Landscape of the Pennsylvania Wilds May through October. 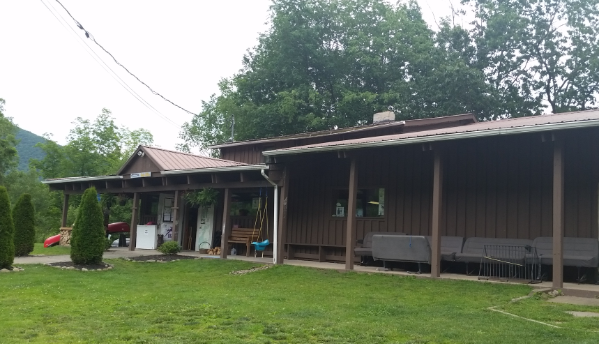 In regards to the family aspect of our adventure, we thought ahead. Since we were unsure what 17 miles of biking (from Blackwell back to Ansonia) might take out of us, we made arrangements that wouldn’t require an end-of-journey shuttle. There are only three times a day when shuttles arrive in Blackwell, and we didn’t know what to expect for our speed.

We made sure to call ahead of time to figure out logistics.

Admittedly, I’m not much of a planner, but this first step saved us more time than I’m sure we even knew. While we have our own bikes at home, Pine Creek Outfitters advised us against bringing them for the simple fact that their accessories—a trail-a-bike for our 4-year old and a pull-behind carriage for our 2-year old—may not fit bikes other than their own. Who wants a rickety 17-mile ride, anyhow?

My 4-year-old and I watched in awe as the assistants put together our bikes for the trip.

“Stand back.” I said. “These guys know what they’re doing.” We got more than a few chuckles out of that.

And that’s the charm of this outpost.  It wasn’t the genial welcome of, “Oh, you’re the writer,” or even the woman who recognized my son and I from the Little Logger 5K in Hyner last April. Even at 9 a.m., when I still wasn’t awake, Pine Creek Outfitters was already on their game.

My son and I took a spin around the parking lot and the five of us clambered into a passenger van to take us through the Pennsylvania Wilds countryside. Over the river and through the woods, with grandmother in tow.

It was nice to take a back seat and watch the world go by when the previous night I had to pay more attention to the road and the clack clack of windshield wipers. This is what I was missing.

Our shuttle driver, Rabbit, regaled us with tales of rattlesnakes, revolvers, and engine repair. For his short stature, Rabbit had moxie. And even though he was freelance on busy weekends, it seems Pine Creek Outfitters hires the right folks.

We met up in Blackwell with my mom’s husband and bikes for the two of them.

Pay attention—this is where it gets good. 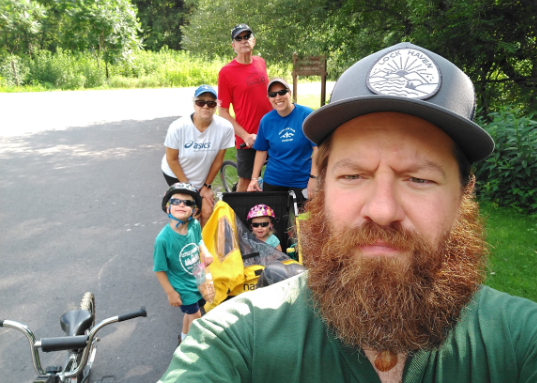 At 4, my son has yet to be on a bicycle without training wheels. I’m not sure how it was for the little guy, but he took to the trail-a-bike pretty well…for a few miles, at least. My mother’s bike had the extra bike seat in case the kids needed a respite from either of the pull-behinds. As much fun as he was having, the boy couldn’t keep his eyes focused on the emptiness of the seat behind his Grammy. He was accustomed to being in it.

We rode along to a litany of, “We’ll switch things up once we stop.” Anything, really, to quell the oncoming onslaught of questioning, “Is it time yet?” It never would be for the poor kid.

We stopped around the three-mile marker to check in on everyone and finally address the demands of the young one. Except…the younger one needed attending to first.

Whether it was the heat from the enclosed canopy or the bike’s motion, kid number two had yakked all over herself and the carriage. While we weren’t prepared for a disaster of this magnitude—diaper wipes can only do so much, and we’d forgotten a spare change of clothes—it was a godsend to have the bike seat on one of the other bikes.

The day was hot, and my son was in no way resting in the pull-behind carriage even if the canopy was opened to let the breeze in and the stench out. Shade offered by the trees and mountains made things a bit cooler, but the valleys made by heavily-running waterfalls provided a nice, if not sometimes chilling, surprise.

We took a bit of a rest at the Turkey Path at Leonard Harrison State Park, highlighted for us by the fine folks at Pine Creek Outfitters. My mom took our eldest up the wooden stairs, and after what seemed like much longer than we expected, I made the trek up the trail looking for them. After quite a long bike ride, this was no easy feat. They were making their way down at this point, but assured me that continuing was the right decision.

It surely must have been; they accompanied me back up again.

Spectacular views offered the entire way up the partially man-made trail made the trek worth it. My little trail runner was bummed we couldn’t continue the rest of the hike as there were quite a few people who were up to the task. We let him know we’d definitely be doing this again, perhaps next time making our way down from the other end of of the trail. 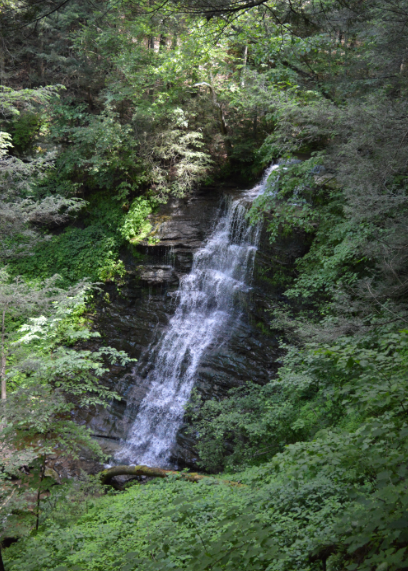 Our family of six took roughly four-and-a-half hours on this trip, a testament to our choice to get a shuttle to Blackwell not from.

There are only a few pickup times at that end of the Rail Trail, and we weren’t sure how we’d do poking around. Seventeen or so miles was a lot, but we’d definitely be working up our endurance for trying this kind of thing out again, maybe even camping along the trail?

My mother’s husband and I left the family at the Darling Run access area, so our trip back with the rented bikes was a bit longer than we intended, and the end seemed much longer than anticipated. We were glad, however, not to have to subject the kids to highway traffic.

We arrived back at Pine Creek Outfitters seeing things in full swing, a parking lot packed and people milling about. The rainy season must have been good for business.

Sure was good to us. 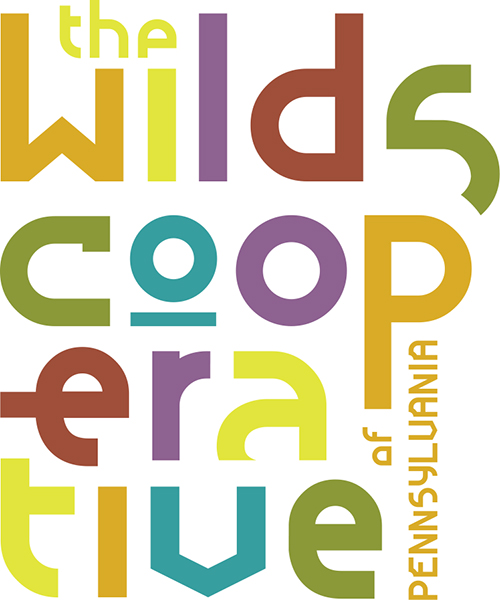 Author: Jared Conti
Over the past twenty years, Jared A. Conti has logged his fair share of miles across the US, Canada, and Europe, honing his skills as a poet, writer, musician, and ambassador of facial hair. But there's no place like home, and he always returns to his beloved PA Wilds, where he's best known as a devoted family man and the bearded barista of Avenue Coffee in Lock Haven, PA. Find more of his writings at www.theoracularbeard.com/.