While hiking one of these unfragmented forests, you are likely to hear many birds singing and calling, but you would be lucky to catch a glimpse of more than a few. That’s because they remain hidden in the dense forest canopy or shady understory; singing, tending their nests, and foraging for food.  Birds that prefer large, intact forests are sometimes referred to as forest interior birds.  They avoid forest edges, open fields, and disturbed areas (especially for nesting and breeding). 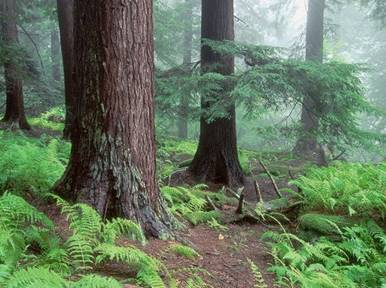 Several SGCN warblers are birds of the forest interior, including black-throated blue and black-throated green warblers. They prefer conifer forests (hemlocks, pines, spruces) while the cerulean warbler prefers upland oak forests and bottomland forests with abundant sycamores.  While these birds feed on insects, the black-throated blue warbler is a bit more omnivorous; also feeding on seeds, berries and has even been observed taking sugar-water from hummingbird feeders. A common threat to these warblers is the brown-headed cowbird, which “parasitizes” warbler nests by laying its own eggs in them.  When cowbirds hatch, they quickly displace their warbler “siblings”, and are raised by their warbler step parents. Since cowbirds avoid interior forests, one key strategy for limiting their impact is to avoid further forest fragmentation. 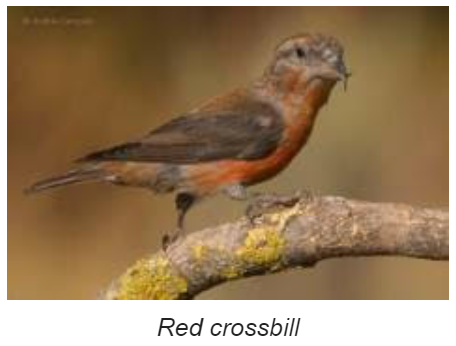 The scarlet tanager is arguably one of our showiest forest interior birds, with its combination of brilliant red and dark black plumage.  A long-distance traveler, it breeds in Pennsylvania forests and winters in tropical rain forests east of the Andes range in South America.  When forced to nest in smaller forest fragments, the scarlet tanager often falls prey to cowbird parasitism like warblers.

The forest interior isn’t just home to songbirds. Several raptors also prefer the quiet of the deep woods, including the northern goshawk and sharp-shinned hawk.  The northern goshawk is known for its relentless pursuit of prey through dense forest, acrobatically flying through the canopy at high speeds. The sharp-shinned hawk is one of our smallest hawks and specializes in hunting songbirds.  It often waits in ambush for unsuspecting songbirds to approach, hiding in the forest canopy, and then strikes with a burst of speed and rapid flight.

Given the importance of unfragmented forests to these SGCN species (and others); efforts should continue to preserve and restore large, intact forests.

*Unless otherwise stated, all photos were sourced from https://creativecommons.org.

About the Author: Greg Podniesinski is chief of the Natural Heritage Section of the PA Department of Conservation and Natural Resources – Bureau of Forestry, as well as State Director of the PA Natural Heritage Program. Podniesinski has worked for the Bureau for the last six years, and a total of 10 years with DCNR. He has also spent 20 years working with the PA Natural Heritage Program. Podniesinski earned his B.S. in Biology from the University of Notre Dame, his M.S. in Zoology from the University Of Maine and his Ph.D. in Environmental Science from the SUNY College of Environmental Science and Forestry at Syracuse. He has a particular interest in plant community ecology, floodplains, fens, bogs, shale and serpentine barrens, and is especially fond of native orchids and serpentine barren plants. Learn more about DCNR here.