The anglers who fished these waters before us

As I reflect back on this past year and my time on the water, I think about the different streams that I’ve traveled to and some of the great fish that found their way to my net. I also recall vividly some of the experiences that you just can’t have if you’re not floating down a river, wading a stream, or spending time in the wilderness.

I remember a young fawn that I stumbled upon in the Spring that almost allowed me to snap a quick picture before it sprung up from its bed and disappeared into the woods. The black bear that crossed the creek thirty yards downstream from me in the Summer that momentarily stopped my heart, and a bald eagle that circled overhead while I landed a rainbow trout on Kettle Creek in Potter County. In October, a beaver the size of a Labrador retriever got a little too close for comfort while I was fishing on Pine Creek at Slate Run, and I also had my first encounter with a bull elk while taking a walk in the woods while on a weekend trip to camp in Clinton County. It was a good year for wild things.

“It is Pennsylvania that gives us the fullest record of fly fishing in the first years of the Republic.”    – Paul Schullery, from his book “American Fly Fishing: A History”

I spent a lot of time this year volunteering with the Pennsylvania Fly Fishing Museum alongside Executive Director Tom Hoffmaster. I first met Tom in March at the annual Fly Fishing Show held in Lancaster. Tom had been a long-time board member of the museum and played a key role over the years in the acquisition of personal items that once belonged to some of the state’s legendary fly fishers, as well as the museum’s transition from where it was originally located at the Allenberry Resort in Boiling Springs to its current location along the Letort Spring Run in Carlisle.

At 81, Tom has immense knowledge of the history of fly fishing in Pennsylvania, and I am very fortunate that he has been so kind to share some of it with me. 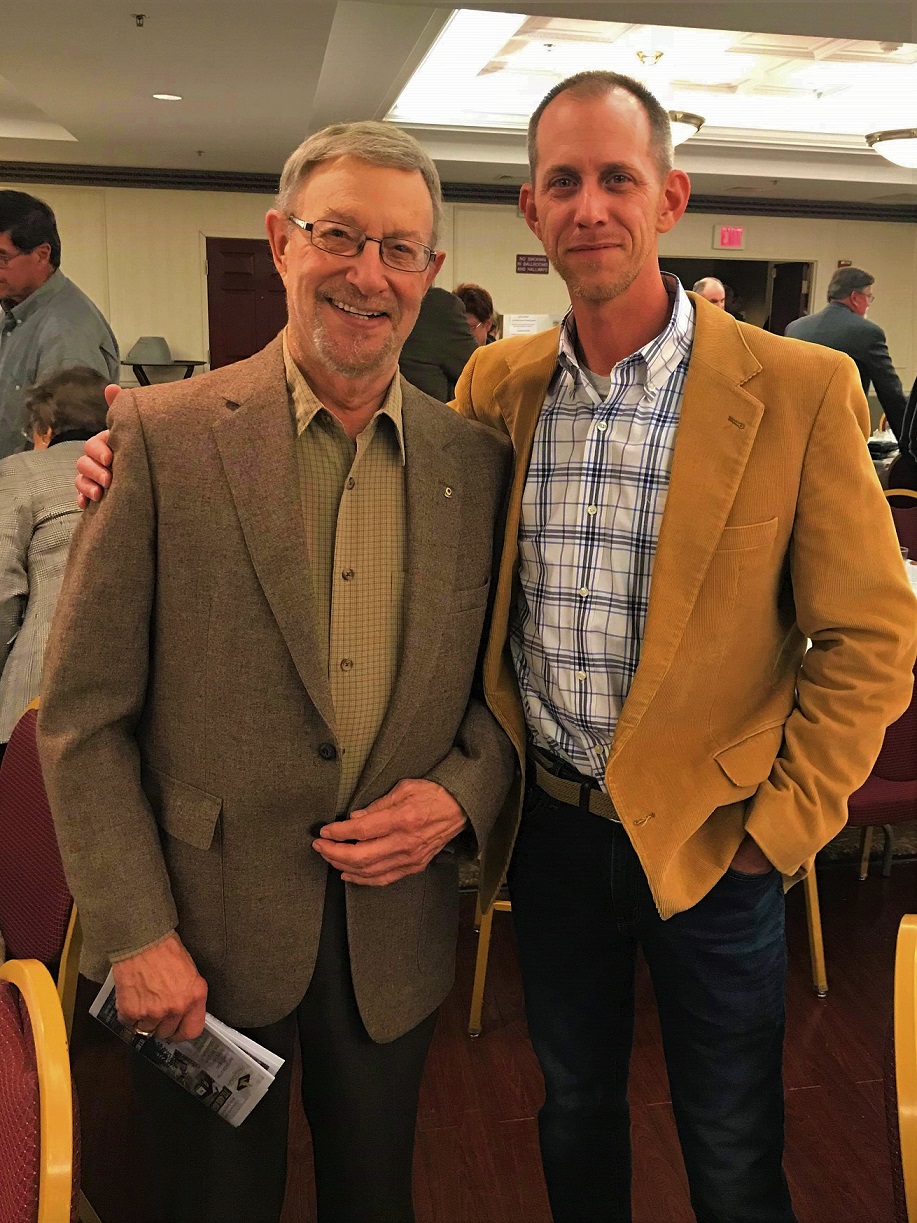 It was in Lancaster that he introduced me to some of his friends. One of these gentlemen was Joe Humphreys. Perhaps the Keystone State’s most iconic fly fisher, Joe’s accomplishments are simply too many to list, and he is respected and revered both nationally and internationally. Joe will celebrate his 90th birthday in January, and he continues to fish the local streams near his home in State College, as well as across the country. But more importantly, he continues to teach. He continues to dedicate his time and vast knowledge to our youth because he feels deeply that if we are instructing our children not only on the skills needed to be a fly fisher, but also on the importance of good stewardship, then we are fostering in them a strong sense of conservation.

“If you sell somebody on fly fishing, they will care for the environment. And what do we need? Water quality. A viable trout stream. That’s worth fighting for.”   – Joe Humphreys

Joe has spent the last few months on a whirlwind tour of the country with Lucas & Meigan Bell to promote their newly released and award winning documentary, “Live The Stream: The Story of Joe Humphreys”. To date, this remarkable examination of Joe has won numerous accolades. Tom Hoffmaster and I had the pleasure of seeing it at the Reading Film Fest last month, and I highly encourage you to see it when you can. It’s a truly touching story of this man’s life and what he has meant to our state. They will be showing the film again at the State Theatre in State College on January 18th in celebration of Joe’s 90th birthday. You can visit livethestreamfilm.com for more details.

Another person that I met at the Lancaster show this year was Joe Jackson. I was walking by the Project Healing Waters Fly Fishing booth when I noticed Joe sitting behind the table at his vise. Out of deer hair, he was tying the most artistic fly that I had personally ever witnessed being tied. It was a hummingbird.

We began talking, and I learned that Joe was, like me, a US Army veteran. While serving, his unit was deployed to Afghanistan in 2004 in support of Operation Enduring Freedom, and again three years later he was deployed to Iraq. After having sustained several injuries, Joe was honorably discharged in 2014. It was in his home state of Indiana that he became aware of Project Healing Waters Fly Fishing when he noticed a brochure for the organization while in an elevator at his local VA hospital.

Since returning home and getting involved with PHWFF, Joe has made quite a name for himself as fly tyer. He has won several awards, and is frequently asked to attend events and give seminars across the country. He is also a guide with Two Forks Guide Service providing trips for fly fishing anglers in pursuit of smallmouth bass. I invite you to visit his website to view his exceptional work.

Joe Humphreys and Bob Clouser, another PA fly fishing legend, also noticed Joe Jackson’s work. Bob Clouser is from Middletown. An accomplished fly fishing angler of smallmouth bass on the Susquehanna River, he is known the world over for the fly he created in the late 1980’s, the Clouser Deep Minnow. To give you an idea of the impact that the Clouser Deep Minnow has had on the fly fishing industry, Bob’s dear friend, the late Lefty Kreh, caught 86 different species of fish on this single pattern. To learn more about Bob, and to add this gem to your arsenal, you can visit his website.

Both Mr. Humphreys and Mr. Clouser were absolutely beside themselves when Joe presented them each with his deer hair hummingbird on the last day of the show. (Pictured at right: Joe Jackson and Joe Humphreys)

It was during this time that I really took notice to the special bond between the different generations in the fly fishing community. The older and more seasoned fly fishing anglers always seem willing to share the knowledge that has taken them decades to acquire, while the younger generations are always eager to absorb what they can and heed the advice. 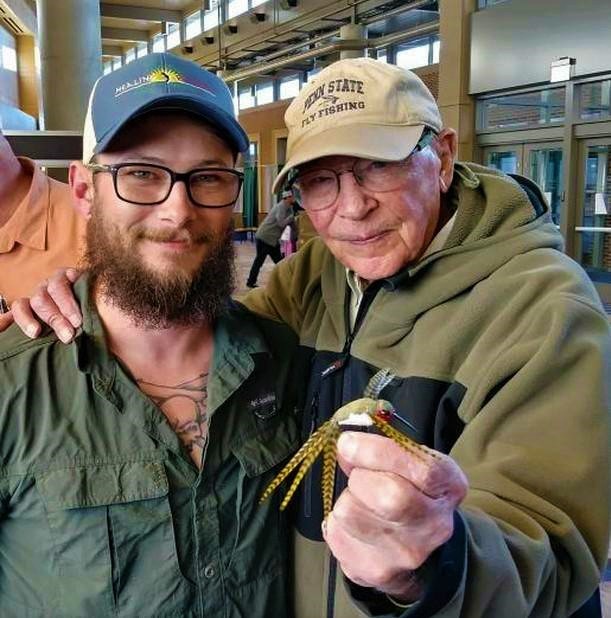 However, the sharing of this wisdom isn’t just about becoming proficient with a fly rod. It’s also very much about how we are caring for the environment, and how we should be striving to become better stewards working to ensure clean and healthy waters for the fish that inhabit them. I began to really see the full scope of what many of us are learning from those that came before us, and I also began to wonder if we are properly passing it on to those that have come after?

In early September, I met Tom Hoffmaster for lunch at a diner near his home in Marysville. He wanted to discuss an idea that he had been thinking about, and during our meeting he informed me that he would be stepping down from his position with the museum. Tom wanted to start a new non profit, and was wondering if I might be interested in working with him on this possible new venture. As a rather rambunctious octogenarian, he has more energy than most people I meet, and his desire to ensure the future of the great heritage of fly fishing in Pennsylvania is strong. He shared with me his vision of a fly fishing organization focused on youth development and education. I have held several positions over the years with various nonprofit organizations. I’ve worked with kids in an outdoor recreation setting, as well as with at-risk youth in a residential treatment facility, so I think Tom understood what I might be able to offer in this regard. I gave it some thought, and soon thereafter, we filed our Articles of Incorporation.

On September 23rd, the Pennsylvania Fly Fishing Association was officially recognized as a new nonprofit organization in PA.

Our mission is simple – To promote and advance fly fishing across the Keystone State.

We’ll do this by focusing our efforts, aimed at youth development and education, as well as environmental education programs, in six different regions across the state. The PFFA is a member-based organization with Tom serving as our very first executive director, and we’re excited to have currently welcomed Jim Rainey to serve on our board of directors. Jim is a retired Lieutenant Colonel having spent twenty-five years in the US Army, seven of which were spent as a military history teacher at West Point. He brings with him a wealth of nonprofit administration and fly fishing experience, and has held the position of executive director with both the Outdoor Writers Association of America, as well as with Fly Fishers International, where he is currently recognized as a Certified Casting Instructor. Jim has also served on the board of directors for three different chapters of Trout Unlimited, as well as that of the Pennsylvania Fly Fishing Museum.

As we continue to grow our member base, work on our branding, and build our website, we’re also working diligently on the planning of our first big event, The PA Fly Fishing & Film Festival, which will take place on June 29th at the Carlisle Expo Center. We’ll have an array of vendors, great raffle prizes and silent auction items, casting demonstrations, fly tyers, a Pennsylvania Fish & Boat Commission (in conjunction with Trout Unlimited) Trout in the Classroom display, and we’re excited to announce that we’ve partnered with the folks from the Fly Fishing Film Tour to screen the selected films they’ve chosen for 2019. And I’m pretty sure some of our PA fly fishing legends will be on-hand, as well.

This will be a free event for our youth, regular and family members, and as an added bonus – anyone joining at the guide, fly tyer, casting instructor, nonprofit or business membership levels will also be given a free booth space to participate as a vendor. If you’re a fly fisher, or an outdoor enthusiast interested in supporting our cause, we would greatly appreciate you joining us! For updates, please like and follow the Pennsylvania Fly Fishing Association Facebook page as we finish our website. To learn more about the benefits that come with being a Pennsylvania Fly Fishing Association member, please feel free to email me directly at paflyfishingassociation@gmail.com. You can also give our Executive Director, Tom Hoffmaster, a call at (717) 957-4191.

I hope you all enjoyed your time on the water this year as much as I did, and I wish everyone a happy and safe holiday season, and a healthy and prosperous 2019 filled with adventure!

Author: Nick Lyter
Averaging 250 days a year fly fishing the waters of the Pennsylvania Wilds and Central Pennsylvania, Nick is passionate about a healthy environment, and dedicated to helping ensure the sustainability of clean water fisheries. He is a co-founder of the Pennsylvania Fly Fishing Association, a new nonprofit organization with the simple mission of promoting and advancing fly fishing across the Keystone State. Nick is also working on his first book, which will be a collaboration with several others that focuses on the conversation between the generations about how far we've come, but also the work that still needs to be done to ensure a safe and clean environment, and how imperative it is that we do so. Follow Nick on Instagram: @nicklyterflyfishing