Mired in the depths of winter, it is easy to catch oneself daydreaming about spring. Even though the season is a month away, it would be good for our spirits to begin preparing for springtime adventures.

Maybe your mountain bike needs some TLC, or you need to brush up on your turkey calling skills. Perhaps it’s time to get your camping or fishing gear in order, or to buy that new pair of hiking boots.

As we contemplate these things, another creature is also preparing for the season. Among the earliest nest site selectors, bluebirds have begun to search for suitable cavities for nesting.

Ubiquitous now, bluebird boxes have seemingly popped up everywhere conservation-minded folks frequent. It’s a good thing too, since their population was in trouble in the mid-1900s due to pesticides and invasive European starlings. The widespread bluebird box effort is credited with significantly helping their population rebound.

To maximize the benefit of existing boxes, be sure to clean them out soon. Bluebirds prefer boxes that are devoid of last year’s nesting materials. If you don’t have a box but would like to get one, the PA Game Commission offers them for sale. There are also many sites with easy-to-follow directions on how to build them. All you need is a little scrap lumber, some fasteners, basic tools, and a good post on which to mount the box. 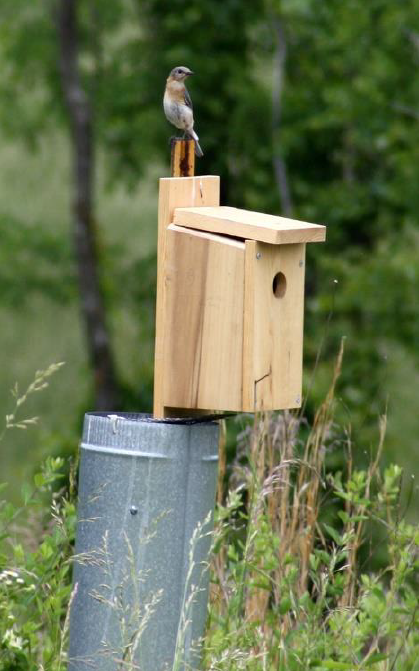 Bluebirds are also particular about where the box is erected. They prefer open and sunny areas not too far from meadows, fields, and woodlots, where they feed primarily on insects. But don’t despair if bluebirds refuse to use your box. It’s not uncommon for other species to use them, which is cool too. A few years ago, wrens and chickadees used one of my bluebird boxes in the same season. Others have reported seeing titmice and tree swallows using theirs.

Whether it’s simple upkeep on your recreational equipment, or aiding a feathered friend, there’s more than one way to help the winter blues.

About the Author: Ryan Reed is an Environmental Education Specialist in the Department of Conservation and Natural Resources, Bureau of Forestry.  He possesses degrees in Wildlife and Fisheries Science and Wildlife Technology, while currently pursuing a master’s degree in Environmental Pollution Control.  He has also worked for the Pennsylvania Game Commission, and taught high school sciences for 11 years. He is especially interested in biodiversity and ecology.  A lifelong hunting and fishing enthusiast, Ryan resides in Harrisburg, PA.