The Old Man, The Bear and Logan Run

My coffee cup gave off a steady plume of steam on this chilly late-May morning as I sipped and sat on the deck at the family camp on the Tionesta Creek in the Pennsylvania Wilds’ Allegheny National Forest and Surrounds landscape. It was part of the early morning ritual of getting ready to cross to the other side of the creek and do some brook trout fishing up Logan Run.

Of many favorite brook trout streams throughout the Pennsylvania Wilds, Logan Run is right up there near the top of my list. From Tionesta Creek up to the waterfall, Logan Run is a mile-long wild trout stream with beautiful hemlocks and an occasional lush meadow.

As I put on my boots and gear, a slow-moving figure on the abandoned railroad bed directly across the creek caught my eye. It was an old man.  80s, maybe even 90. He walked slowly, carefully, steadying himself with a cane, his rod and reel in the other hand.

Getting a much later start than I had planned, I waded downstream across the cold Tionesta, navigating the slick rocks and rapid current. Finally, I reached the mouth of Logan Run. Climbing the embankment, I stopped to see if I could catch a glimpse of the old man along the banks of the Tionesta, but he was nowhere in sight. Hope he’s ok, I thought.

I continued up Logan Run, snapping a nightcrawler in half, baiting the hook, hitting all my favorite pools where I knew trout were hiding. I fished this stream often, from Tionesta Creek to the waterfalls and back, and as a result, enjoyed many a brook trout and wild leek dinner over the years, a delicacy at our family camp. 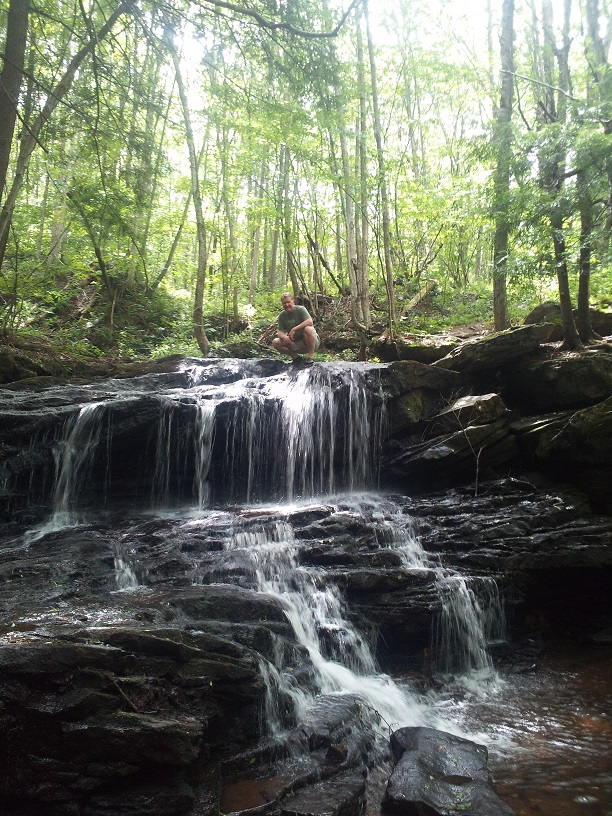 A quick word about brook trout fishing. Perhaps the most difficult means of fishing known to humankind, brook trout fishing requires great patience and greater dexterity. It is a stealth sport, almost like hunting. You must keep low and sneak up on brookies in the larger holes and pools. Native brook trout are easily spooked. Even the shadow of your rod across the water sends them scurrying for safe harbor until they’re confident you’re gone.

These are narrow, rushing little streams with all kinds of natural obstacles, including rocks, fallen trees and roots, and if you’re not careful, you can spend 20 minutes untangling your line from the branches of an overhead hemlock, or end up snagged on a root system under the bank.

What made this trip up Logan Run much different from other trips was that, despite my best efforts, there was not a strike, not a hit or a nibble. Nothing. “Where are the trout?” I muttered under my breath.

Suddenly something big caught my eye just to my right, fewer than 40 yards up on a hillside shelf. I stopped dead in my tracks.

With that keen sense of smell, Mr. Bear knew I was there long before I saw him. That old First Nations proverb came to mind: “When a pine needle falls in the forest, the eagle sees it, the deer hears it, and the bear smells it.”

Sniffing the wind, that nose was going a million miles an hour. Now he stood upright on hind legs, staring directly at me. I froze.

In what seemed like an eternity (although it was probably no more than two or three minutes) we watched one another intently. Finally, he dropped to all fours, turned and waddled off in the opposite direction, higher up the mountain. I continued fishing, although constantly looking over my shoulder through the hemlocks and water beeches.

This wasn’t my first bear encounter on Logan Run. Black bears are common up in this hollow, and I’ve come across several over the years. Knowing fully well that they are inherently more wary of me than I am of them has never really put me at ease, especially being so close to a wild animal that outweighs me by a couple hundred pounds and can run at speeds of up to 30 miles per hour!

Changing bait again, I couldn’t believe I was still getting skunked on a stream I knew like the back of my hand. Hole after hole, pool after pool, places that were historically teeming with brook trout, my creel was still dry. Empty. I felt defeated, embarrassed.

I had planned to fish all the way up to the falls, as I had done many times when the falls was known to only but a handful of local people, unlike today.

About halfway to the falls, again something suddenly caught my eye upstream. It was a human form slowly working its way downstream toward me. Through the underbrush, I couldn’t make out much, but this was odd.  Rarely have I encountered another human being on this stretch of Logan Run. The overhanging hemlocks shielded me from sight, but I could make out that it was a man who had no clue I was there.

Something about him looked familiar.

It was that old man I had seen walking along Tionesta Creek!

I watched silently as he braced himself with his cane and, with his free hand, flipped his line into the water, pulling out a beautiful native brook trout. Carefully balancing himself with the cane, the old man got down on one knee and wrestled the trout up onto the bank and into his creel. Despite his age and frailties, he had this brook trout fishing thing down to a science.

Slowly I made my way upstream toward him. He was a bit startled at first. I smiled and extended my hand, putting him at ease, and I introduced myself.

He said his name was “Howard” from Marienville and had been fishing Logan Run since he was a boy. He was every bit of 85, his fishing gear was as old as he.

“Not a single hit, how are you doing?” I asked.

Lighting up a filterless cigarette and with a smile, he came closer and opened his creel, revealing seven beautiful native brookies.

“I just got my limit!” he chuckled, a twinkle in his eye.

Now I fully understood why I was coming up empty handed. Old Howard was fishing hard, cleaning out and spooking trout all the way upstream ahead of me!

He knew this stream well and gave me a parting piece of advice.

“Next time, you’ll do better – if you get up here before I do!” he said, with a hearty laugh.

Then he walked away, back down toward Tionesta Creek.

“God bless you, Howard,” I yelled back to him. “I sure hope I’m doing this when I’m your age!”

With a wave of his cane, he shouted back at me, “You will. Just watch out for the bears!” He continued downstream, disappearing through the hemlocks.

Fishing Logan Run in the years following our encounter, I really hoped to see the old man again and show him my creel of brookies. I kept looking for him, but never saw him again.

To this day, I still recall his spirit, his determination, how he refused to let his age and severe physical limitations keep him from what he loved best: those native brookies and Logan Run.

Fly fishing for trout through fall

How a guided fly fishing tour made lessons a reality