The Fringe Style: Rock Climbing in the PA Wilds

When you think of rock climbing most people think of Mount Everest, the Rockies, or Yosemite Valley. Pennsylvania is not usually on the top of this list. But why? We have rocks! In part, it is due to the way rock climbing has been defined or rather perceived. Simply put, rock climbing is people climbing on rocks. However, some would argue that there is a difference between a fleeting scramble across random boulders as a child and the premeditated ascent of a technical rock face. There are many terms to describe what climbers do: technical climbing, free climbing, sport climbing, aid climbing… the list goes on. Though the style of each ascent can vary, they all have a common ancestor in exploration, adventure, and human nature.

What is Rock Climbing?

To better understand what climbing is, it makes sense to go back to the beginning. As a sport, it is safe to say that climbing had its genesis in the 19th century. But who started it? And where did it begin? It’s not entirely clear. There were a number of remarkable early ascents across the globe. They varied in style, though their significance is undeniable.

In 1848 Sebastian Abratzky sneaked his way into Königstein Fortress by climbing a crack in the sandstone walls. His goal was simply to avoid paying the entrance fee. What he achieved, however, is now considered the first free climb in the Elbe Sandstone Mountains in Saxony. In 1886, Walter Parry Haskett Smith, considered by many to be “the Father of Rock Climbing,” completed the solo first ascent of the Napes Needle in the Lake District in England. This was significant, as he climbed without the use of gear to aid his ascent. His style was more athletic — akin to what we now think of as rock climbing.

There were a number of significant ascents in the late 19th century in the USA as well. George G. Anderson was the first person to summit Half Dome in Yosemite in 1875 —  a summit that was mostly considered inaccessible at the time. Anderson defied preconceived limits and constructed a route by drilling and placing iron eye bolts into the smooth granite to aid his ascent. Nearly two decades later, in 1893, Willard Ripley and William Rogers were the first to summit Devils Tower in Wyoming. At first, they planned to fly a kite over the tower and use the kite string to haul a rope over the top to aid their climbing. When this plan failed, they turned to the construction of what would be a 350 foot ladder, which enabled them to reach the summit. By today’s standards the use of a giant ladder would not necessarily be considered rock climbing. What about drilling and placing bolts? What is allowed? Are there rules to rock climbing?

Even among rock climbers there is unending debate concerning style and ethics. In some places, the use of metal gear and chalk are prohibited. There are also those who would argue that it’s not free climbing unless you are barefoot. All pretense aside, to most, rock climbing involves ropes, harnesses, and sheer cliff faces of death-defying heights. And while this does depict a certain aspect of the sport, the world of rock climbing is much broader in its scope. Take bouldering for example. There are no ropes or harnesses and the rocks are typically small, 10 to 15 feet … sometimes shorter. Climbers have surely been bouldering since the inception of the sport. Yet, for a long time it was not considered “real climbing,” but rather a playful way of training for more serious roped adventures. Disparagingly referred to as “pebble wrestlers,” its participants look less like serious mountain climbers and more like local riff raff. After a closer look, however, you find the essential components: people climbing rocks.

Climbing in the PA Wilds

This fringe style of climbing has become increasingly popular, and it has had a profound impact on rock climbing across the globe. Climbers no longer need an expanse of tall, sheer cliffs. Shorter rock formations are now very exciting. Many areas not traditionally associated with climbing have become destinations. Here in the PA Wilds, thousands of smaller rocks patiently waited until the end of the 20th century when a few local climbers finally began to develop the boulders. In the late 70s came early climbing pioneers like Ross Barlow, Jason Morrison, Kelly Stuart, and the Landin brothers: Steve and Paul were climbing in the Kinzua area long before the sport had matured into a mainstream activity.

In the 80s, Michael Peters, who traveled from the Finger Lakes to the Kinzua area to climb, was perhaps the first to recognize the bouldering potential. However, it wasn’t until the late 90s that a young climber, Brandon English, emerged and developed a bouldering circuit at Rimrock Overlook before summarily migrating to Colorado. It was during his brief tenure that the focus truly turned to bouldering. Today, more and more climbers are looking toward the PA Wilds for their bouldering adventures.

So what is rock climbing? Is it climbing if you use pitons, a rope, or special climbing shoes to find the summit of a cliff? What about using a herculean ladder to reach the top of one of the most iconic monoliths in North America? What about climbers with parachutes? It’s true! There is a style of climbing where people have left their ropes behind and use parachutes for protection. In the end, isn’t rock climbing simply people climbing on rocks? Perhaps the rest is a personal preference. I for one am grateful for the diverse methods and styles of ascents. They are fantastic and have opened the sport to new locations and a broader audience. 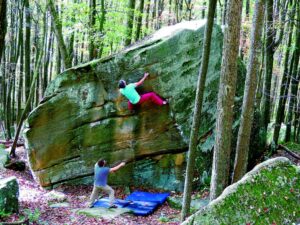 Guidebook author, climbing developer, and owner of Goat Fort Indoor Climbing Gym, Dana Harrington is a resident of the Pennsylvania Wilds. Indoor and out, he has been actively contributing to the climbing community for over 20 years, compelled by the belief that community is important…movement is good for the body…and play is for everyone! 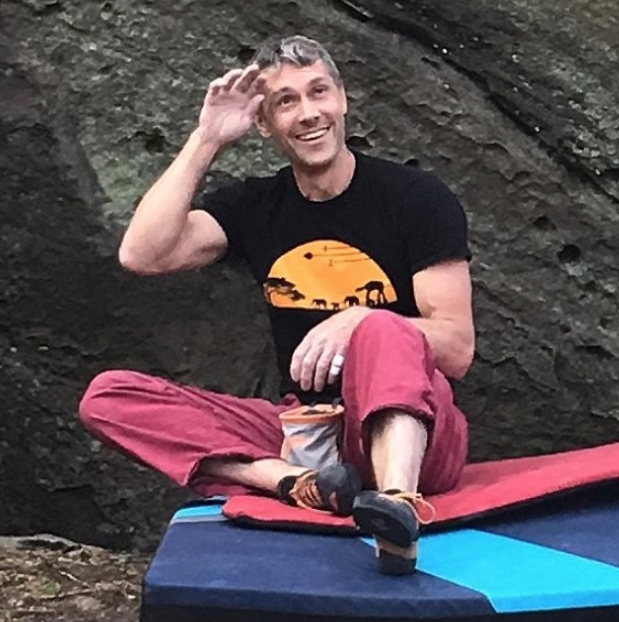 The Fringe Style: Rock Climbing in the PA Wilds

Plastic to Rock: Safely Adapting to Climbing Outside

Indoor Climbing: How an outdoor adventurer found a passion for bouldering inside