Spotted Lanternfly: The worst bug in the Commonwealth

You would be forgiven if, upon sighting a Spotted Lanternfly in flight, you mistook it for a dramatic-looking moth.  It’s not a moth.  It’s also, despite its name, not a fly.  Instead, it’s a member of the planthopper family — insects, including cicadas and stink bugs, that often resemble plants and that hop from place to place.

The Spotted Lanternfly unfortunately often hops a ride to places it doesn’t belong.

What is the Spotted Lanternfly?

Native to China, India, and Vietnam, it arrived in the U.S. by way of a stone shipment in 2012 and was spotted in Berks County, PA, two years later.  Today, according to the most recent findings from Penn State, what we now know as a seriously invasive insect, under quarantine in 34 Pennsylvania counties, is proving extremely difficult to contain.

A variety of our state’s plant life is vulnerable to this insect, which uses its piercing-sucking mouth parts to drill through a plant’s outer layers and then feed on the sap.  Often attracted first to the invasive tree of heaven, the Spotted Lanternfly (sometimes abbreviated SLF) will feed on grapes, both wild and cultivated, blueberries, and tree fruits such as apples and peaches, as well as black walnut and black cherry trees, maples, birches, willows, and tulip poplars.  Their feeding severely stresses the host plants, potentially causing wilting, loss of leaves, reduction of cold hardiness, dieback, yield loss, and even death.  Economists at Penn State have concluded that, if not contained, the insect could cost our state economy over 2800 jobs as well as $324 million every year.

Being able to identify this insect is key to containing it.  The adults are about one inch in length and, when at rest, fold their black-spotted, pinkish-tan wings over their backs.  Both males and females have yellow abdomens with black stripes.  They typically lay their eggs between September and November, choosing hard smooth surfaces that can include tree trunks as well as patio furniture, and camouflaging their eggs with a waxy substance that makes them look like patches of mud.

We need to do our part by becoming vigilant on our own properties.  This means doing away with trees of heaven, promoting plant health, scraping eggs if we discover them, and using traps and chemical controls when appropriate.

If you find either the insect itself or its eggs on your property, take a photo and, if possible, scrape the insect/eggs into a freezer bag or a jar that contains rubbing alcohol or hand sanitizer.  Take note of the location of discovery and call the SLF hotline at 1-888-422-3359 or visit https://services.agriculture.pa.gov/SLFReport/.

Create your own Circle Trap

The best trap is what's called a circle trap, essentially a modified funnel, which can be purchased or constructed by hand.   The Spotted Lanternfly can be destroyed fairly easily with insecticides; even soaps or treatments that include neem or pyrethrum work well.  It's best to use the option that's least toxic; if applying chemicals, always choose EPA-regulated products, and remember to protect pollinators by never using spray on flowering plants.

Individual containment efforts are only part of the solution.  The PA Department of Agriculture is working with the U.S. Department of Agriculture, as well as Penn State and the Penn State Extension Office to control the spread.  A quarantine has been imposed in 34 Pennsylvania counties, and businesses as well as residents must comply.  Intentionally transporting the Spotted Lanternfly is considered a serious offense. When traveling either in or out of a quarantine zone, cars and belongings must be checked for all life stages of the insect, and items (such as firewood) being transported from an area known to be infested must be inspected thoroughly.

Both research and public outreach efforts are underway in the Commonwealth.  Researchers at the Penn State College of Agricultural Sciences are developing biological and chemical controls, working for example on disrupting the insect’s reproductive cycle and testing organic containment methods. Results of this research are shared with Pennsylvania growers whenever they become available.  Recently, a large team that includes Penn State was given a USDA grant to increase its Spotted Lanternfly research.

Penn State Extension educators have also undertaken a public awareness campaign.  Over 10,000 people learned about the Spotted Lanternfly at Extension-sponsored presentations in 2020, and it’s estimated that thousands more were exposed to educational displays at community events and through social media. 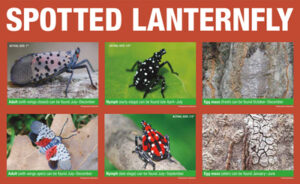 High school students have also come on board.  As part of its Student Leadership Program, the Chesapeake Bay Foundation is recruiting students from Pennsylvania’s high schools to join what they’re calling the “Squish Squad.”  Using awareness, advocacy, and action as the focal points of their campaign, members of the Squad are learning to identify and contain the Spotted Lanternfly in the field, and they’re also conducting workshops and creating pamphlets to educate others.

“We’re pleased to see youth putting their creativity and enthusiasm toward protecting our state’s vital economic and natural resources,” Pennsylvania Agriculture Secretary Russell Redding said. “Young people are the bright future of agriculture, and we need what they bring to the table. I’m excited to see what the Squish Squad dreams up to help stomp out Spotted Lanternflies.”

Although, at least so far, the PA Wilds have been relatively untouched —   with an infestation present in Cameron County, and individual sightings reported in Centre and Tioga — containment is proving difficult.  A recent article reported that a Spotted Lanternfly colony has just been seen in Old Lycoming Township. More than ever, it’s imperative that we become vigilant. The PA Department of Agriculture is asking us to report any sightings by calling their hotline (number listed above) or by going to this website:  The Spotted Lanternfly has been called “the worst bug in the Commonwealth.”  Let’s discourage proliferation by doing our part.

Sources for this article can be found at:

Karen Elias, retired after 40 years of teaching college English, is now working as a freelance writer and environmental advocate in Lock Haven.  She recently completed training to become a Climate Reality leader and is using her writing to increase both awareness of our precious natural resources and support for environmental sustainability. As a regular contributor who shares Stories of Personal Experience And Knowledge to the PA Wilds Are Calling blog, Karen is a member of WildSPEAK, the PA Wilds Civilian Storyteller Corps. Learn more here.

Something’s fishy in the forest

Just what is green infrastructure?