Ghosts in the PA Wilds: Sarah and the North Hall Library

Just about every college has a ghost story. If you believe all the rumors, there’s a lovelorn girl who killed herself in every university in America. The stories are so common that they can’t all be true. But some of the stories sound more credible than others.

Mansfield University, located in the Pine Creek Valley & PA Grand Canyon Landscape of the Pennsylvania Wilds, has one of those. The university library, North Hall, is said to be haunted by a ghost named Sarah. Stories and sightings of Sarah go back about 50 years.

North Hall was built in 1878, and has been remodeled considerably since. The upper floors were the female dormitories for decades, while the lower floors acted as the library. It was renovated in 1908 and again in 1930, closed in the 1970s, and finally reopened in 1996. And at some point in all that, the stories started. [Photo courtesy of the North Hall Library Archives] 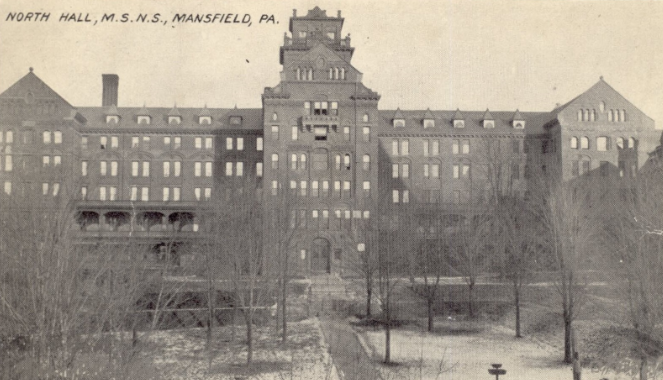 According to the Mansfield University website, some of the earliest stories were in the 1970s. (Information for this article was provided by the North Hall Library Archives.) In those earliest days, the ghost had no name, and was simply referred to as a girl who died in the building. Some stories involved her room being on the second floor, closed and locked, never to be used again. Most of the stories had the girl plunging to her death from an upper floor, heartbroken over the loss of a boyfriend.

Sightings included strange, unexplainable noises, the sound of footsteps and music, and items moving around. And at some point, the ghost acquired a name: Sarah.

It’s uncertain how this name came to be attached to the haunting. It is worth noting that “Sarah” is a common name used by frauds who are pretending to be psychic; it’s common enough to be plausible, and just vague enough that it’s hard to look up. There may be a certain amount of truth to this one, however.

Clever research from the library’s staff turned up an 1866 catalogue with a list of the first class of graduates. Among the others is a name: Sarah A. Woodruff, with an asterisk marking her as deceased. Could Sarah Woodruff be the ghost lurking in North Hall?

My research shows that Sarah A. Woodruff was born on May 6, 1847, to Lewis and Almeda Woodruff of Dimock, Susquehanna County. She died on July 30, 1866, at age 19, and was buried in the Dimock Cemetery.

According to David Guinn, Archives Tech and self-described “Ghost Guy” of North Hall, Sarah became very sick while at school. She went home, returned for commencement, went back home with her diploma, and passed away.

Though the cause is uncertain, it may have been cholera. Several of her family members, buried in the same cemetery, died within a five-year period, and this is common to epidemics, such as the cholera outbreak at the time. This actually fits with the legends of the unused room. In those days, diseases were widely misunderstood, and it would be plausible that a university might close off a room that was thought to contain disease, never to be used again. It may be where the story began.

People today still wonder, does Sarah really exist? Who was she? Even though there are many stories and theories, nobody knows for sure. People will continue to look for answers…. And, as everyone knows, a library is the perfect place to go for those.

9 thoughts on “Ghosts in the PA Wilds: Sarah and the North Hall Library”