How many Pennsylvania state parks have you visited?  Maybe one, or how about two? And how about state forests?

If one or two is your answer, you’ve got some catching up to do if you’re going match Jasmyne Andricks of Lehighton, PA, in eastern Pennsylvania.

On a recent visit to Kinzua Bridge State Park in the Allegheny National Forest and Surrounds landscape of the Pennsylvania Wilds, Jasmyne shared her passion for visiting state parks.

Jasmyne’s adventure began around 2013.  At that time, she was living near Pittsburgh, and she would meet up with her friend, Roger, who lived in eastern Pennsylvania. 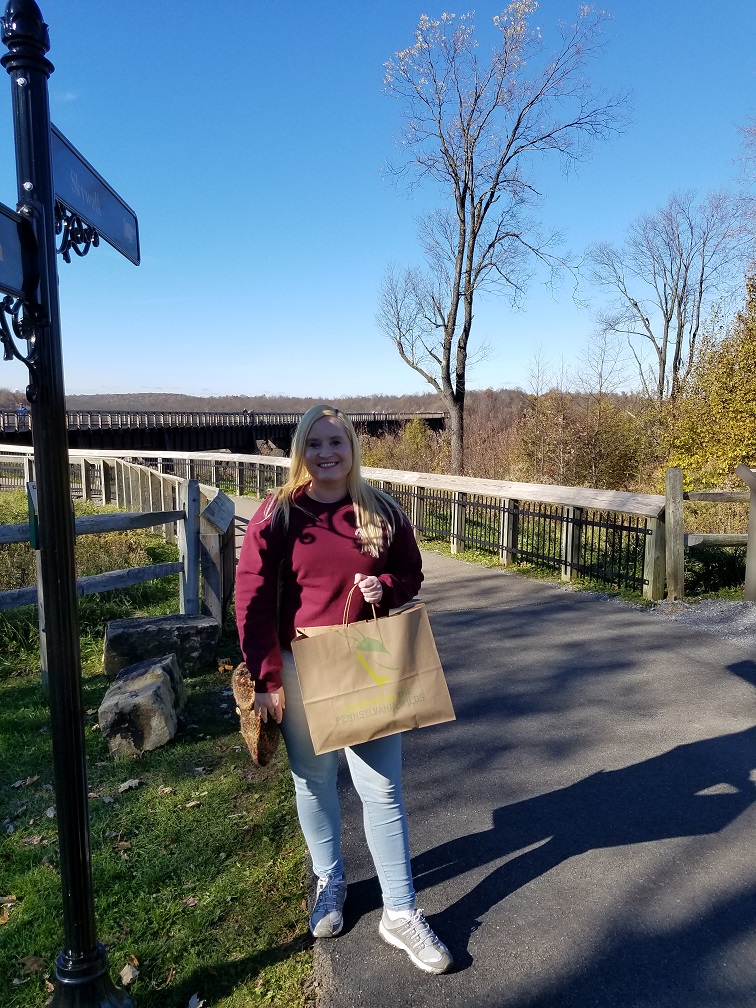 “We got the book at the Three Rivers Festival,” Andricks recalls.  “They had a table set up where they were selling the (state park passport) books with a park ranger there.”

The first stamp they gave to her when she bought the book was for Point State Park in Pittsburgh.

“After that, I think it was McConnells Mill (State Park),” Andricks said, recalling the next stamp she would collect in her passport book.  “From there, it just became a journey. We just went to more and more and more. We did a lot of state parks. … Literally, we’ve done like a circle (of Pennsylvania) – east, north, west.”

Jasmyne explained that most of the time she and Roger would plan their trips to visit a cluster of state parks in the same vicinity, getting several stamps during each visit.

“It was a quest for me,” Andricks said.  “We try to do it in spurts. We try to hit a couple in the same area.  We make a whole trip of it over three days or two days. We just get up and go.  We don’t really have a destination. If there’s events going on when we get there, that’s great.”

For example, Jasmyne said she and Roger recently took a day trip to northcentral Pennsylvania to visit a number of state parks in the Pennsylvania Wilds, including Ravensburg, along the I-80 Frontier; Ole Bull, located in the Dark Skies landscape; and Little Pine, one of several in the Pine Creek Valley & PA Grand Canyon landscape – which are all along or near the border of Clinton and Lycoming counties.

But once in a while, she and Roger plan a drive to state parks for a specific event.  She noted one occasion where they planned a special trip for an event at Hills Creek State Park near Wellsboro, also located in the Pine Creek Valley & PA Grand Canyon landscape.  She also recounted the time she and Roger visited Laurel Hill State Park in Somerset County to see Van Wagner after missing his appearance earlier at a state park closer to them in eastern Pennsylvania.

“We drove out and made a trip of it.  We actually drove 300 some miles. (Wagner) was there doing a 125th anniversary of the state park system, and he would do presentations at various state parks in the summer.  We missed one in Promised Land (State Park) in the Poconos,” she explained. “He did a fabulous job. He would sing – sing some folk songs … about the history of the state park system.  He did these short and informative presentations. But they were good for everyone to hear.”

Jasmyne said she also enjoys exploring each state park, not just visiting to mark another one off her list or just to get the stamp for her book.

“I actually explore as many as I possibly can,” she said, noting that she and Roger even took a two-year hiatus where they could have visited even more state parks.  “I walk or hike them. My friend (Roger) will walk with me and explore the state parks in the summertime.” 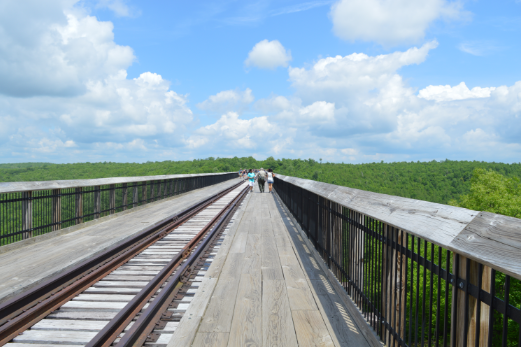 “I have a couple favorites, but they’re all so beautiful.  There’s too many I like,” Andricks said. “I just fell in love with the quest of visiting as many as we could.  No two state parks are the same. They’re all a little bit unique.”

In noting some of the things that make the state parks unique, she pointed out different things that she loves about some of her favorites.

One of her favorites is Pymatuning State Park, where it looks like ducks walk on water but actually walk on fishes’ backs.

“I just felt like one of the kids,” Andricks said.  “That’s a unique one.”

Jasmyne and Roger also enjoy the camping available at several of the state parks, whether it be tent-camping or camping at a cabin.

She said she also enjoys state parks that have history tied to them because it adds to the experience, like Pine Grove Furnace State Park created by the Civilian Conservation Corps in the 1930’s.

“Those young guys built the roads (there) and the cabins, all built by hand,” she said.  “They also planted the trees. I’ve … stayed at the Paymasters Cabin at Pine Grove Furnace State Park, which was formerly an iron foundry.  They converted the building to a cabin where they would get their pay (when it used to be the iron foundry). It just adds that history factor.  I really liked the pine trees (there as well).

“A lot of them do have a specific history tied to them.  And don’t forget I love Kinzua Bridge (State Park). That’s one of my favorites.  That’s a beautiful state park.”

Jasmyne acknowledged that some of the adventure in visiting Pennsylvania’s state parks can be the journey finding them.

“Actually, that has happened to us once or twice where we tried finding a state park and had trouble finding it because it was basically in the middle of nowhere, but that’s what’s nice about them,” she said.

Recalling one specific time when she still lived near Pittsburgh, Jasmyne said she and Roger tried to make a trip to Ryerson Station State Park in Greene County in the southwestern corner of Pennsylvania.

“That’s a nice one, but it’s kind of the only one down there,” Andricks noted.

Though they eventually found the state park, she said they kept on driving until they ended up in West Virginia.  She said they decided to explore a little bit of West Virginia then but made it clear that her love of the Keystone State drew them quickly back home.

“I’m very loyal to Pennsylvania. (It) is a beautiful state, but not everybody realizes that,” Andricks said.  “Pennsylvania does not try to break your wallet or try to rip you off.”

Jasmyne’s passport book brought her to many state parks, which made her love of Pennsylvania’s state parks grow.  And that made her want to learn more about the state park system.

“I started learning more about state parks, especially the CCC (Civilian Conservation Corps) boys from the 1930’s,” she said.  “I’m a huge fan of Pennsylvania state parks. I have old postcards that I collect of state parks, and I have a big map on my wall from 1948 of state parks.  It’s a bit of a hobby for me now.”

Andricks explained all the parks are for the public and fun for families, in particular, to enjoy together.  She also pointed out that the parks are a great way for Pennsylvania to preserve its history and nature.

“State parks are wonderful.  The best thing about them is they’re free, not like other state parks you go to (in other states) and you have to pay to get in,” Andricks said, noting that’s the reason the state parks were originally created – that all of the public could go and enjoy them without having to worry about fees.

Jasmyne plans to continue her quest to visit the state parks and forests she still has yet to see, but she’s also encouraging others to do the same.

“When you ask people, ‘What state parks have you’ve gone to?’ most people say maybe one or two, and (the parks are) near them, especially for somebody that may have gone to, like, two…. There are just so many people who don’t realize that there’s a state park that’s 30 miles or 40 miles away,” Andricks said, then referencing Dr. Maurice K. Goddard, director of the Department of Parks and Forests for Pennsylvania in the 1950’s, who proposed building a state park within 25 miles of every resident of Pennsylvania.

For adventurers in the PA Wilds, there are 29 state parks and about 8 state forests in the 12 ½ counties that make up the Pennsylvania Wilds region alone.  It wouldn’t take much travel to tackle a large chunk of the state’s parks and forests just by making day trips within the PA Wilds region.

“Just explore, and go explore as many state parks as you can that are near you.  Go camping, stay at a cabin or tent-camp. … Even if you can’t cover 20-plus state parks, just explore the ones around you.  Make it a day trip. Anybody can do that on your day off. Take the kids or go with your best friend and explore the local state parks.”

Looking to start your own journey, but don’t know where to begin?  You can start the same way as Jasmyne with a state park passport book.  You can buy your own here.

Need some more direction or help figuring out what journeys and landscapes are available to explore locally?  Visit pawilds.com/explore.

Author: Jason Burt
Born and raised in the PA Wilds, Jason Burt has lived in Marvindale, McKean County, all his life — just about a hill climb away from Kinzua Bridge State Park. There, Jason has the outdoors in his backyard, where he has hunted, fished and observed all varieties of wildlife from deer to turkeys to bear to eagles to fox to coyote. Graduating Salutatorian from Smethport Area High School in 2001, he attended Lycoming College in Williamsport. After graduating cum laude with a degree in English/Creative Writing in 2005, Jason worked several years at The Bradford Era newspaper. As a reporter and then News Editor, he learned even more about this PA Wilds area as the paper covered local news in Cameron, Elk, McKean and Potter counties. Jason now serves as a Customer Service Representative at the PA Wilds Conservation Shop at Kinzua Bridge State Park.