Exciting changes are happening at Allegheny Outfitters (AO) in Warren, a nature-based, veteran-owned company, which started in 2006 purely as a livery service, renting kayaks and canoes to tourists.

AO, located in the Pennsylvania Wilds Allegheny National Forest and Surrounds landscape, recently moved and expanded operations from its small storefront canoe, kayak and backpacking shop on one end of Warren, and its livery side of operations on the other side of town, into one big building right on the banks of the Allegheny River downtown.

Under one roof, AO becomes a one-stop outdoor shopping outlet where you can buy a new kayak and buy or rent outdoor goods, or book guided and unguided backpacking, fishing, and paddling trips lasting anywhere from just a few hours to several days.

“There will be a conference room for workshops, an office, shipping station, storage/repair space for all our canoes and kayaks, and it will bring a longtime dream of ours to fruition – our trip planning center. We’re map people. Every great adventure I’ve ever taken has started with a map of some kind,” explained Piper. 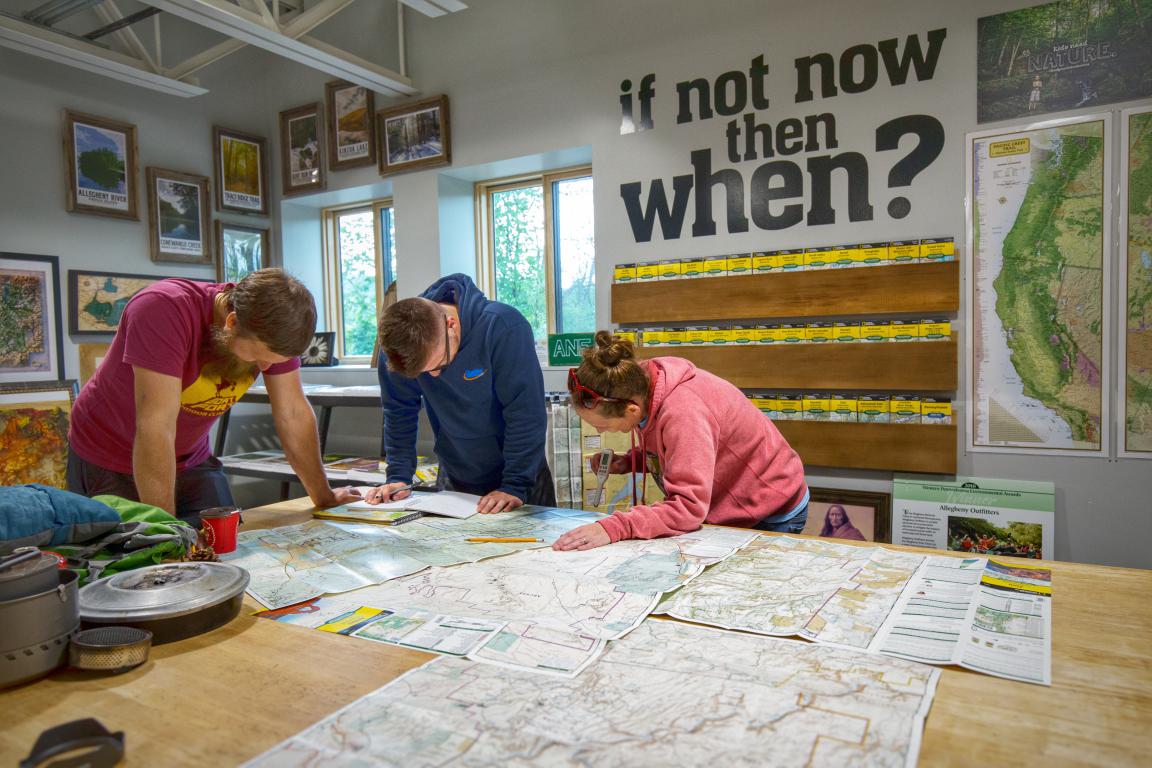 (Images above, provided by Allegheny Outfitters, showcase the livery’s new retail space and its Planning Center.)

“We’re creating a space within our shop dedicated to finding resources to get out there. We’ll have a big table so folks can come in, sit down and start planning. Most importantly,” said Piper, “it’ll give us a much more efficient outfitter/shop operation under one roof, resulting in a better experience for all our customers.”

With an ever-expanding client-base, she said it was simply time to move on to a larger location, which will afford AO unlimited possibilities. “The new place is a total game-changer for AO, and something we’ve been working toward for about 8 years.”

Piper explained that, in the past, thousands of people walk through AO’s busy little livery hut, but only a fraction of them actually made it over to AO’s brick and mortar shop on the other end of town. “That was always a challenge, not to mention the challenge of a very small, uncomfortable, crowded livery space and dozens of back-and-forth trips we make daily between the two locations to grab this and that. Our new location will put an end to all that,” said Piper.

Geared for growth, the new facility is scheduled to also house Warren’s popular craft brewer Bent Run Brewing Company, which will move in sometime this summer, and there are plans in September for an indoor climbing wall designed and constructed by Goat Fort Indoor Climbing.

“So, you see, we’re not the only local grassroots small business that’s been working hard to make our community a better place to live and visit,” explained Piper.

One of the Allegheny National Forest’s biggest cheerleaders, Piper has deep roots along this stretch of the Allegheny River. After eight years as an air traffic controller in the US Navy, she moved back home to Warren with her three children in 2006 to start up Allegheny Outfitters.

She is Leave No Trace Master Educator certified from the National Outdoor Leadership School and ACA Level II Kayak Instructor certified. Piper has co-authored the Allegheny River Paddling Guide and published On the river and down the trail,  a collection of 100 photos of her adventures in the Pennsylvania Wilds.

Piper is also one of the founding members of the annual Allegheny River Clean-up, which began in 2009. Teaming up with the U.S. Forest Service and Northwest Savings Bank, as well as a crew of volunteers from over 100 other businesses and organizations, a 31-mile stretch of the Allegheny and two tributaries get a thorough annual cleaning thanks to this group effort. 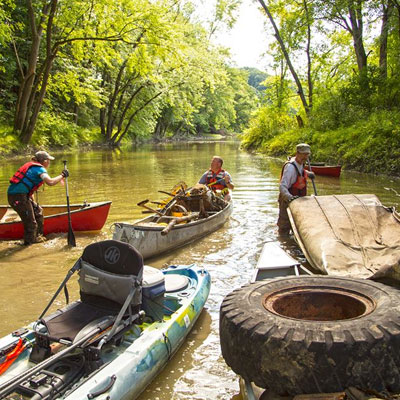 “To date, more than 100,000 pounds of metal alone have been pulled from the Allegheny River and nearby Brokenstraw and Conewango Creeks. At the same time, this effort has created new volunteers and paddlers alike,” said Piper.

For stewardship efforts such as this, along with outstanding customer service, Allegheny Outfitters has won many awards, including a Governor’s Keystone Tourism Award and a 2012 winner of a Champion of the PA Wilds Award. 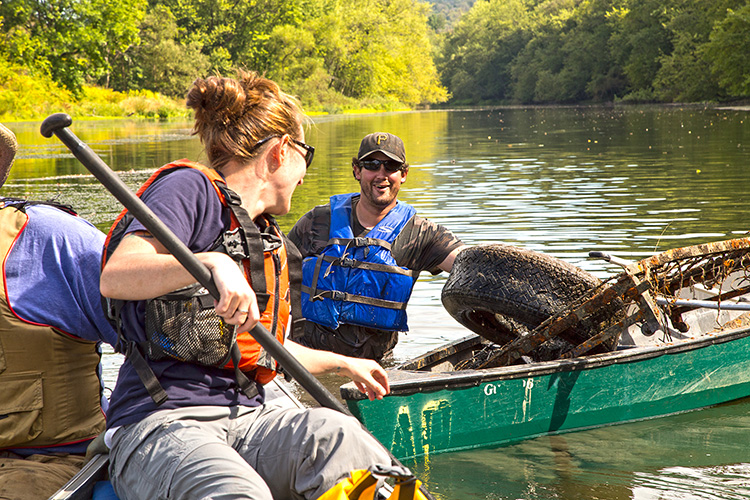 AO has also been honored with the Community Impact Award for northwest Pennsylvania as part of the 2015 Governor’s ImPAct Awards, honoring a company which exemplifies the standard of “doing well by doing good,” according to the Team Pennsylvania Foundation. Winners show a commitment to the growth and development of their employees and the community.

As for the expansion effort, the hard work, at last, is nearly over.

After several months of major construction and a somewhat hectic transition pace, Piper and her team are more than ready to get back to “business as usual,” helping people enjoy life in the great outdoors from a brand-new location.

She can’t help but note that AO has come a long, long way since those early days of 2006.

“A few years ago, a bunch of us outdoor enthusiasts started meeting on Mondays for lunch to throw around ideas about what we’d love to see for Warren. We have this 500,000-acre National Forest in our backyard and a river with numerous creeks running through our town – it’s an incredible playground. This (expansion) is a direct result of the seeds that were planted at those get-togethers.”

She notes that, as a small, veteran-owned, independent outfitter and outdoors store, expansion projects like this don’t happen without the help of so many.

“Our dedicated team at AO – both year-round staff and seasonal – has always played a huge role in our growth. Without our team, we would not be where we are. Folks have come out of the woodwork to lend a hand and help any way they can to bring this to fruition,” explained Piper.

“When I take a minute to sit back and think of how we got here, it’s an inspiring effort all around. We’re all here to help each other, try our best to answer questions, learn from one another and encourage that next adventure outside. I’m excited for AO, but I’m also very excited for our community on a whole. These are, indeed, exciting times in Warren, PA!” 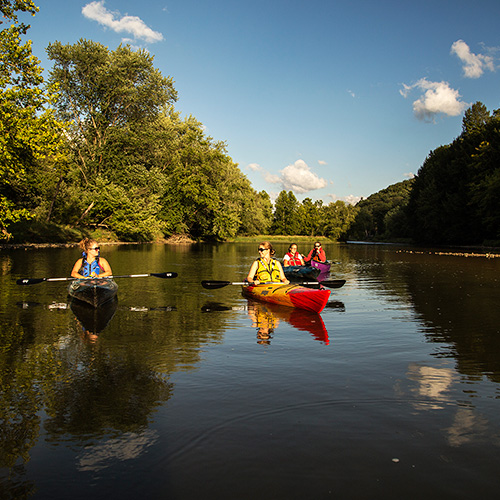 Looking for adventure in the PA Wilds? Check out these outfitters.