It had been years since I visited Kane, Pennsylvania.

I recall countless trips to the family cabin in Potter County and Kane was a routine stop for fuel and a bite to eat as we traveled through the Allegheny National Forest & Surrounds Landscape. As a lad, I was mesmerized by the wild wolves at the Lobo Wolves sanctuary along Scenic Route 6. In those days, Kane was known throughout the nation as the “Home of the Lobo wolves.”

Returning recently, I couldn’t help but notice things were different from the Kane of my last visit a decade ago, or the Kane I remembered from my youth. 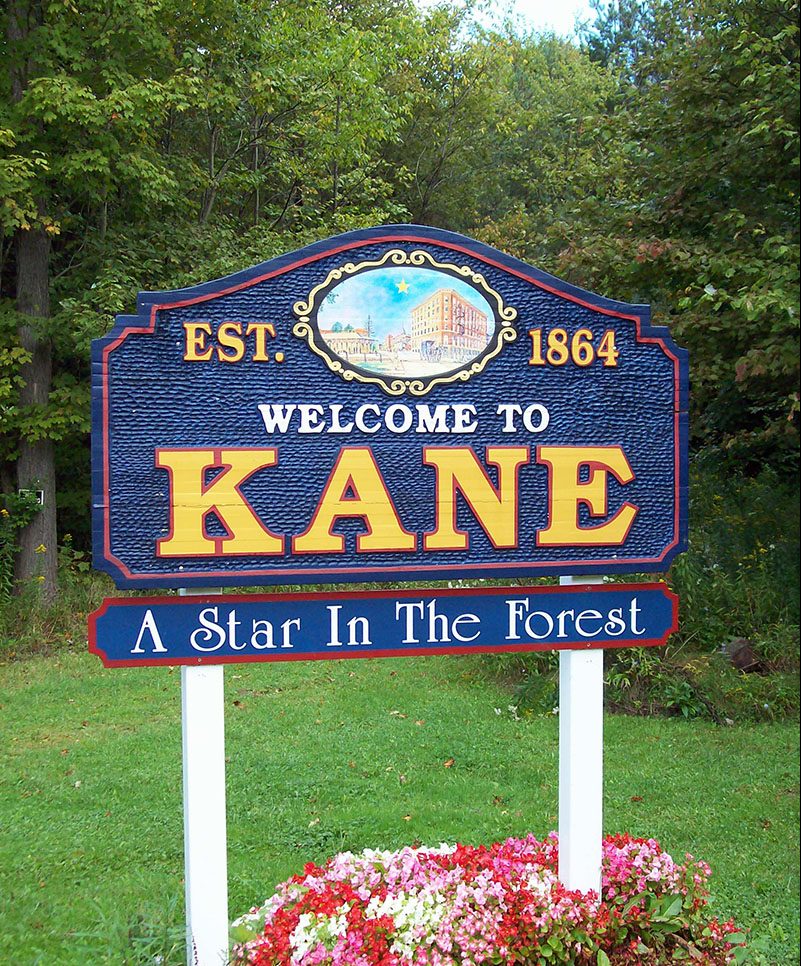 In my drive through the uptown, it was evident that things were changing.

The old boarded-up railroad depot is now a beautifully restored structure and home to the Kane Historic Preservation Society, thanks to the hard work of volunteers, like Dick Bly and John Marconi. From town founder, Civil War General Thomas Kane, to the legendary Lobo Wolves, it is a treasure-trove of Kane’s rich history. Well worth the visit.

Walking along Fraley Street, I was struck by uptown building restoration projects and new facades, and every so often I had to sidestep progress.

Sidewalks and roads are undergoing vast improvements. New and established businesses are expanding. Parks and memorials are being spruced-up, there is a new skate park, and more and more cultural events, such as the annual Art in the Wilds Festival, are happening. An uptown amphitheater hosts concerts, social gatherings and weddings.

Mayor Brandon ‘Brandy’ Schimp gave me a tour of the progress. As Mayor, she manages to juggle her civic duties with being a wife and the mother of two toddlers. Her charisma, enthusiasm and love for her community are contagious.

“Kane has always been a community where pride runs deep,” said Mayor Schimp, a Kane High alumna, class of ’02. “Fight, Kane, Fight!  Many alumni will recognize it as one of our school’s rally cries. From the very beginning, it’s been a phrase used by fans of the Kane Wolves and it is exactly what is happening here today.”

A commitment to education is key, she said. “Our school district and students are receiving state and national recognition, and the people of Kane are coming out to volunteer and work at making our town one of the best places to live and visit in Pennsylvania.”

Kane’s renaissance is a people movement, she explained. “Our revitalization efforts come from all sides of this community, working together to improve the town we love. The enthusiasm is spreading, Kane today is a united front, and it’s why we are proud to be part of the Wolfpack!”

The Mayor is also quick to credit the Kane Area Revitalization Enterprise (K.A.R.E.) with playing a vital role in the revitalization and restoration efforts. For more than two decades, K.A.R.E. has worked with and for the Kane community. The K.A.R.E. board consists of volunteer citizens with diverse backgrounds and occupations.

I also met up with Kane Borough Manager Donald Payne who said, not only is the financial re-investment in the community coming together, so is an influx of fresh-faces. “Having young professional families moving to our town for the quality of life we have as a small community, having them take an interest in and become active participants in our revitalization is great,” said Payne.

Uptown at Laughing Owl Press, a bustling full-service letterpress print shop founded in 2010, owners Joe and Andrea Lanich, along with their young creative team, are part of the youth movement downtown. “We have the best of both worlds here in Kane,” said Joe. “Here, we are able to keep overhead costs low while being a competitive player in the global market through internet sales and convenient local shipping availability. You couldn’t ask for a better arrangement.” [Photo at right from Creative Makers of the PA Wilds Exhibit.] 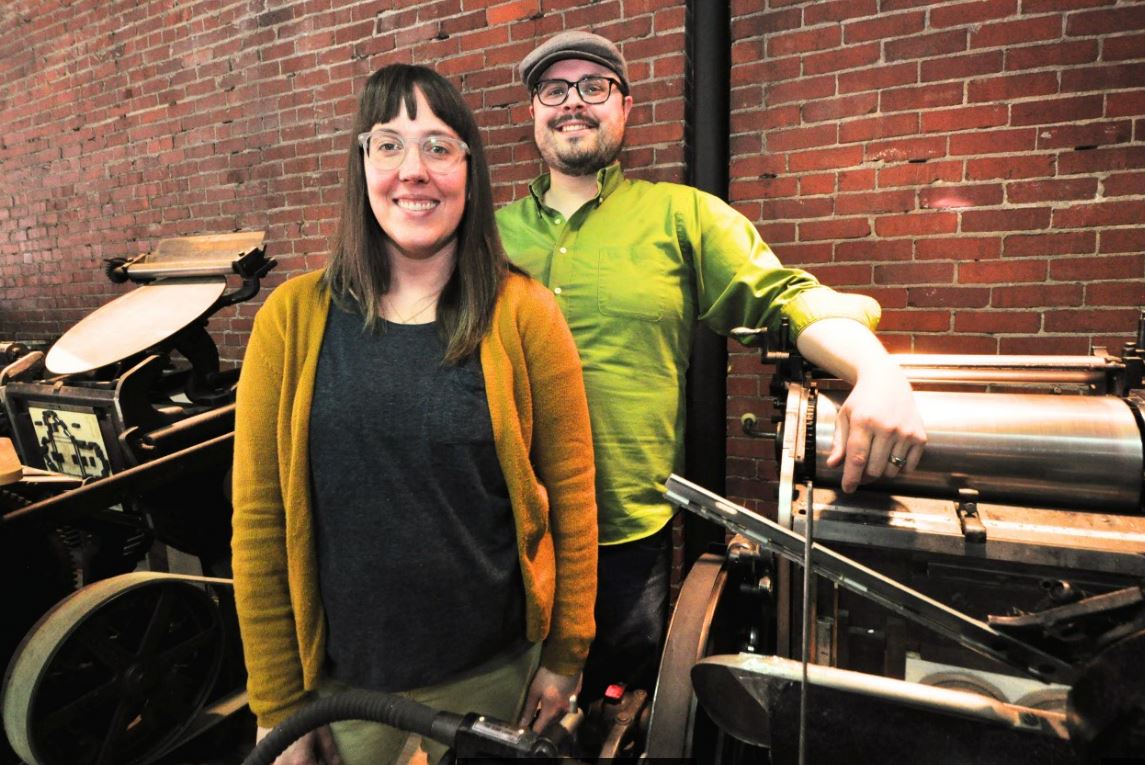 Big things are happening at The Laughing Owl Press. Its upstairs will soon become home to a business incubator/accelerator for the Pennsylvania Wilds Center for Entrepreneurship Inc. Announced by Congressman Glenn Thompson and PA Wilds Center for Entrepreneurship Executive Director Ta Enos, the incubator/accelerator will allow the Center to serve businesses all across the Pennsylvania Wilds and continue to expand commerce; create jobs, wealth opportunities and professional development opportunities; and allow many rural businesses to grow within their regional supply-chain. (Additional details about the PA Wilds Media Labs incubator space can be found here.)

A few doors down from Laughing Owl Press, I lunched at Table 105, an impressive upscale eatery in uptown where owner Riki Tanaka is pumped by what he sees.

“Kane in five years will be a happening, hip, trendy place to live, work and play,” said Riki, who loves what is happening in Kane. “I personally foresee a full and prosperous main street within 10 years with numerous businesses opening and taking advantage of the popular Kinzua Bridge and the Rails to Trails effort, which will continue to bring tourism dollars.” Riki’s Table 105, which just opened in June, seats 118 with a full bar seating 30. 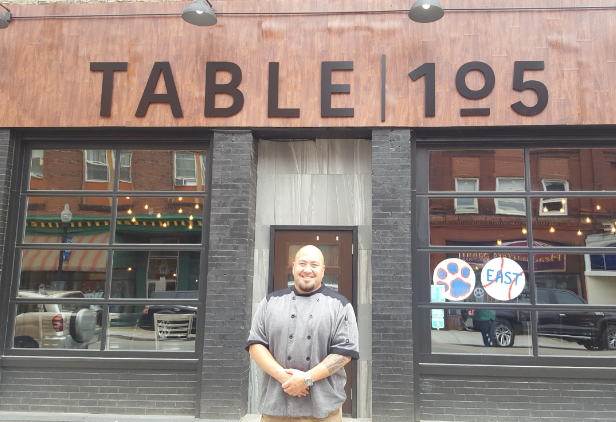 Established Kane business owners continue to see growth and are happy with the strides the town has made. Among them are businesspeople such as Susan Zook Wilson, Bert Cleer and Derek Dangelo.

Susan and her brother, Ken Zook, co-own  Zook Motors, Kane’s Ford dealership, which was founded in 1925. One of Kane’s biggest cheerleaders, the Zooks and Zook Motors have made significant contributions to the community. “The revitalization efforts of community leaders, key organizations and existing businesses are creating a renewed energy for the community which is also very exciting,” explained Susan. “When everyone works together, great things happen!”

Bert Cleer founded Highlander Energy in 1981 as a small family-owned heating contracting company and it has orchestrated tremendous growth, specializing in power, petro-chemical, natural gas processing, as well as pulp and paper industries. Highlander employs 100 and has expanded its operations with a 30,000 square foot pipe and steel fabrication. “This facility has allowed us to increase our productivity and flexibility, while maintaining our already excellent quality and pass rate,” said Bert.

Tucked away on the westside of Kane is Derek Dangelo’s Custom Built Manufacturing plant. He and his crew build those huge heavy-duty wreckers here. Derek started a small one-man facility in 1978 that quickly expanded. He entered the towing business in 1980 and built his first wrecker. As time progressed, Derek expanded into the heavy towing market, which was where Dangelo’s Custom-Built Manufacturing was formed in 2006 with a full production of heavy tow trucks. National business is booming, he said. “Our years of commitment to the autobody industry helped us design and build some of the best quality wreckers on the market today.”

Other businesses are thriving.

CJ Spirits, a craft distillery located just north of Kane on Route 6, is popular with tourists and locals alike with spirits made from fresh, local grains and pure Allegheny Mountain spring water.

Heading out Route 6 on the eastside of town is Flickerwood Wine Cellars, a beautiful state-of-the-art winery operated by Sue and Ron Zampogna and son Rick. Founded in 2000, Flickerwood was honored with the 2016 Champion of the Pennsylvania Wilds Business of the Year Award and has seen steady growth over the years. [Photo at right by Tim Walck.] 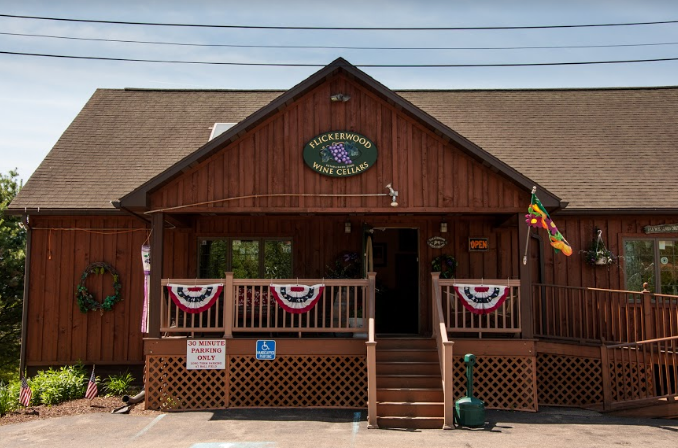 Yet, the pace of growth brings challenges. Namely, a shortage of workers and a lack of abundant overnight accommodations.

There are more job openings in Kane than there are qualified workers to fill them. “With the growth of many existing businesses and the addition of new ones, we are seeing an abundance of job opportunities, yet we are not seeing an abundance of people seeking employment,” said Mayor Schimp. “However, as Kane native Judge John Cleland says, ‘An active, attractive community attracts people’. With our ongoing revitalization efforts, we are positioning ourselves to not only increase our tourism, but to appeal to those who want to live and work in our active and attractive town.”

She notes that challenges are nothing new to the people of Kane. “We’ve faced struggles and tragedies like any other small town. Major employers closing their doors, economic shifts, and resources drying up.  We’ve even seen the devastation Mother Nature can unleash with the tornado of ‘85. But, we pick ourselves up, dust ourselves off and we get back to work. That’s just who we are and what we do!”