The journey of a lifetime through the Pennsylvania Wilds

I vividly remember my very first trip to the Pennsylvania Wilds. Grandpa had just bought a camp in Potter County and our family was en route to check it out.

For a 9-year-old “flatlander” from Ohio, this was some high adventure. Heading to the mountains for the first time, I was beyond excited.

Traveling through Marienville on Route 66, the family car sped toward Kane, bound for Route 6 and Coudersport, part of what is today the Dark Skies landscape of the Pennsylvania Wilds. It was almost dark. All-around on the dusky horizons, I could make out what looked like storm clouds. The adults got a good laugh, explaining those weren’t storm clouds, they were mountains.

Passing through the dense Allegheny National Forest on Route 66 past her Marienville birthplace, Grandmother leaned toward me and whispered, “Look at those woods. There are bears in there. If we’re lucky, we’ll see one.” I swallowed hard.

Now almost dark, as the car got closer to Kane, she said to me, “When we get to Kane, there are Lobo wolves there!” Wolves? Seriously? I shifted nervously in my seat, trying hard not to think about the possibility of the car breaking down, being stranded with not only bears but wolves close by!

On the way to Smethport and Port Allegheny, it was pitch black and I couldn’t see any mountains, but I could feel them. Dad roared that’56 Chevy up and down the mountains on Route 6 through the Seneca Highlands.

This landscape was vastly different from my native “flatland” Ohio – but at Grandpa’s new camp at morning’s first light, it was love at first sight in this quaint little cement-block cabin in “God’s Country.”

It was just down the road from the famous Ice Mine, across from “Ice Mountain.” This is where I spent my childhood summers, from the time I was nine until I was 21. Nothing fancy at all, it was a simple one-floor structure located on Mill Creek right across the road from the Firemen’s Camp. 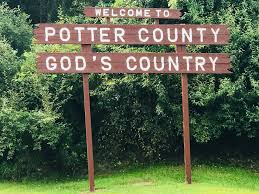 It had only two rooms, two enormous rooms. One was a combination living room/kitchen, the other was a sleeping area with at least ten single and double beds and a small bathroom off it. This was an arrangement we referred to as “the mess hall and the dormitory.”

Grandpa’s favorite tree was the Silver Spruce and he went about planting them all around the camp. It was a no-brainer selecting “Silver Spruce Lodge” as the name of the camp. 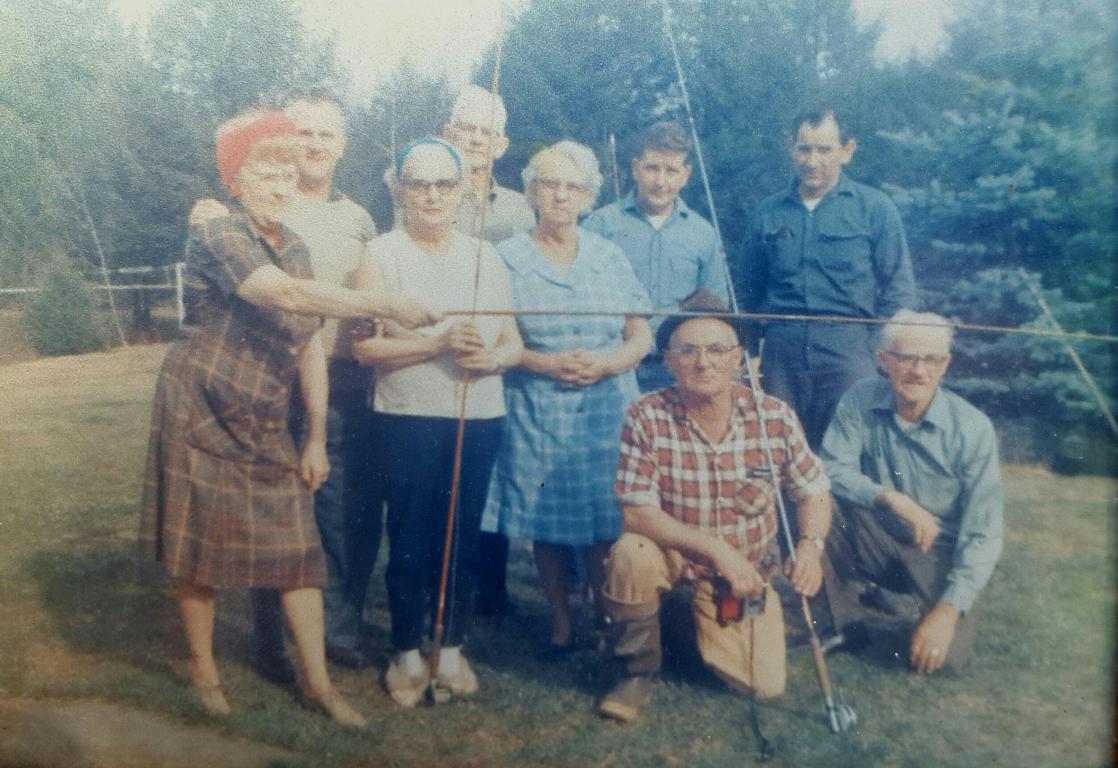 Through the years it just kept getting better, a magical place, with a trout pond, Mill Creek flowing through it and a whole mountain to explore.

On many a Saturday night, it was the meeting place for the Plotts, Mitchell and Long families.  With rapt attention, I listened to Grandpa and his siblings tell of encounters with rattlesnakes, bears, wolves, and panthers. Their stories were endless, and so was the laughter.

As a teen, Grandpa labored as a wood hick for the timber companies. His most vivid memory was seeing the horrific collapse of the Austin Dam. He recounted details of the disaster often. As many times as I heard his stories and visited the ruins, I was in awe.

Grandpa Harry Plotts was born in 1898 and raised in Wharton. His forefathers were Potter County settlers in the little towns of Austin, Costello, and Wharton and, as far as I can tell, our family goes back six generations in the Pennsylvania Wilds. 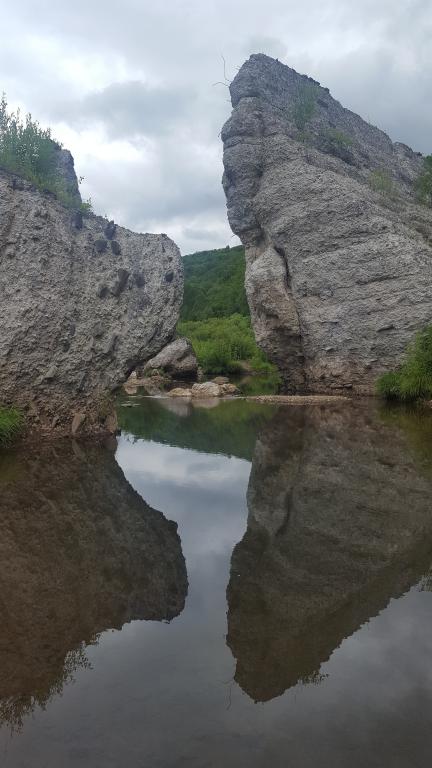 (The Plotts family is pictured at right. Standing in back: Walter, Violet, Lester, Dorothy, Earl and Daisy; seated in front: Leo, Clyde, and Harry. Photo provided.) 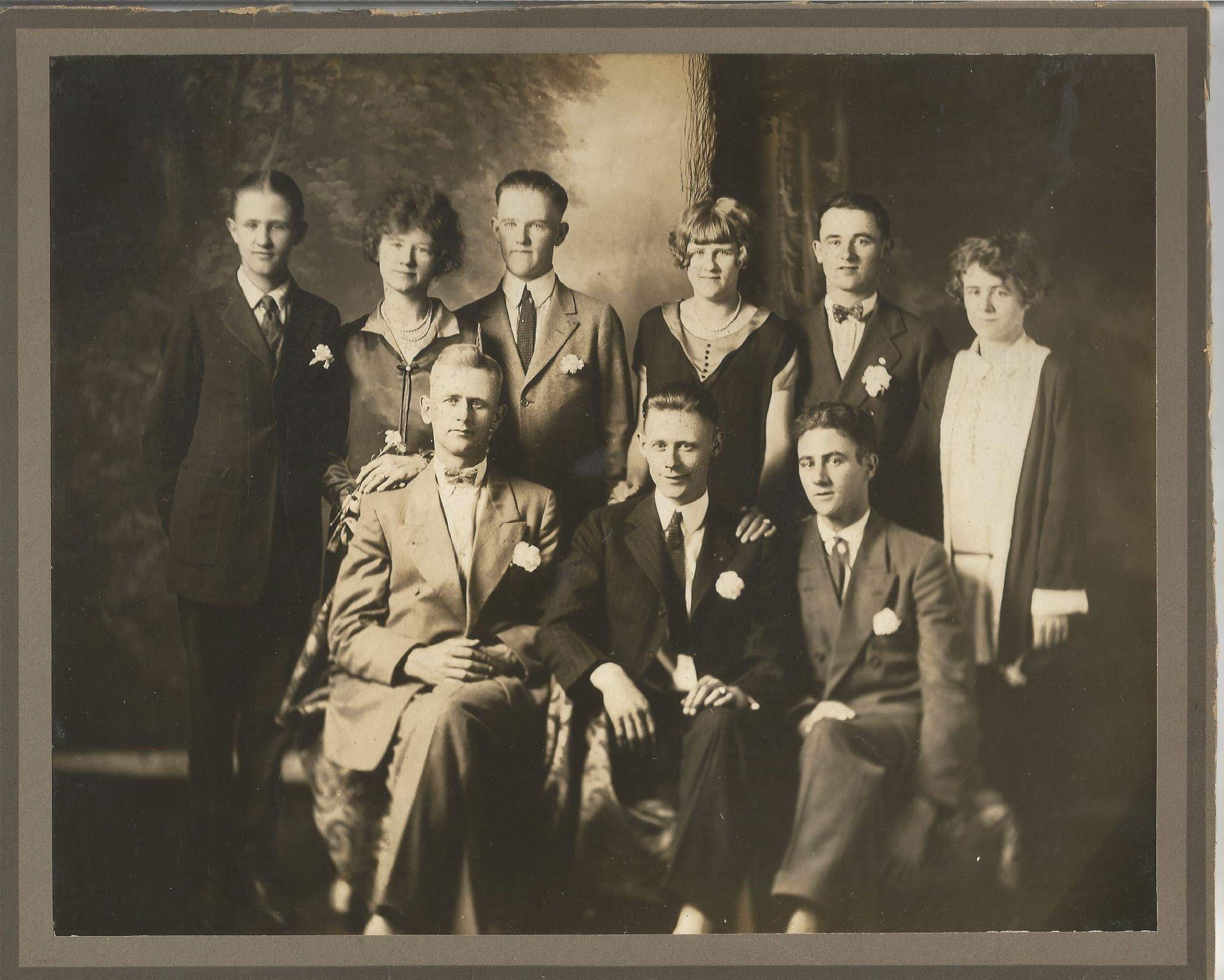 As the timber industry faded, Grandpa followed the lure of high-paying steel mill jobs in Youngstown – Ohio’s “Steel Valley” – which is where I was born and raised. Relocating to Ohio, Grandpa never forgot his Potter County roots. He always had the Silver Spruce Lodge to call “home.”

Despite time and distance, there are vivid memories of heading to “God’s Country,” the sights, the sounds, and even the smell.

I always knew we were getting pretty close to camp when I spotted Erway’s Market. That was always a good sign – and who could forget that weird smell upon entering Coudersport –the tannery! Just west of town it was roughly a half-mile of foul odor, but it was a sweet smell to many Coudersport people who made their living there.

We would stop and say hello to great-Aunt Dorothy and great-Uncle Bill Long who lived in Coudersport right next door to Pittsburgh Pirates third baseman Don Hoak, who just happened to be one of my baseball heroes. How I wanted to meet Don Hoak. The only problem was, Don was never around when I visited in the summer; he was playing ball with the Pirates, naturally.

Another neighbor of Dorothy and Bill’s, just a few years before, was Eliot Ness and his family. Uncle Bill would tell us stories of sharing a brew or two with Eliot at the Hotel Crittenden. Aunt Dorothy was friends with Mrs. Ness.

There was a routine stop at Goodenough’s store for groceries and Dick McCaigue’s distributorship for a case of Dubois Export for the adults and soda pop for us kids.

I knew we were getting closer to camp when I would see that huge white sign, high up on a mountain clearing, “ICE MINE – ONE MILE,” with an arrow pointing east on Route 6.

There was no TV at the camp, and Aunt Dorothy spoke of a family friend named “John,” who was developing something called “cable TV,” which would bring TV stations with a clear picture to Coudersport. There was a radio at the camp, but only one station during the day – WFRM 600. It was on from sun-up to sundown.

I read a lot, discovering the Pennsylvania Game News, and The Potter Enterprise. I loved all the Enterprise articles by Harry Kinney – “the Mountain Boy”. There was also Coudersport native Jim Bashline’s wonderful articles in some of the outdoor magazines at camp.

Grandpa taught me to fish for brook trout. My first brookie was caught at Uncle Bill and Aunt Dorothy’s camp out on Little Moore’s Run that first summer when I was nine. Uncle Bill cooked it up for me on the grill. But as I was chowing down on my big catch, I asked Uncle Bill, had he remembered to take the worm out first? The adults were rolling on the ground with raucous laughter. I wasn’t laughing. I considered it a serious question. 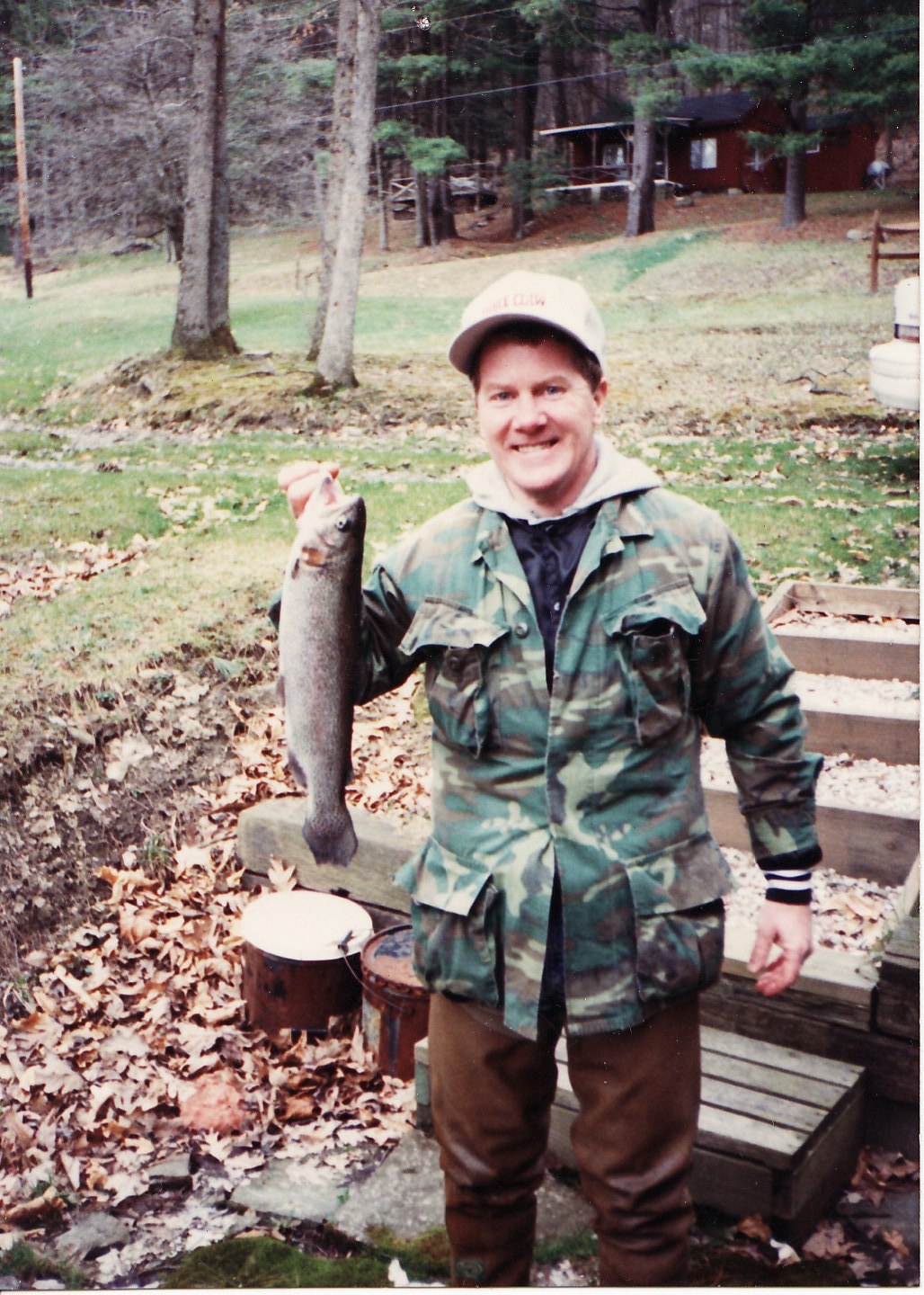 Those were good times, and more memories abound:

As the years went by, Grandpa’s health began to fail. He sold the camp when I was 21. How I hated to see that place go because it was such a huge part of my life. I felt a profound sense of loss. Almost like a member of the family had died.

All of my family’s Potter County homes and camps are gone now, but as my father once told me, there are two things in life no one can ever take from you: your experiences and your memories.

With Silver Spruce Lodge a memory, my Dad knew it was time for a new place in the Pennsylvania Wilds, to continue making family memories.

We built a camp in the early ‘70s along Tionesta Creek in Forest County. This part of the Pennsylvania Wilds was somewhat different from Potter County. The valleys were quite narrow, the mountains not as quite high, but the area was beautiful, located in the heart of the Allegheny National Forest. My parents, siblings, and, years later, my children, considered this new camp “home.” 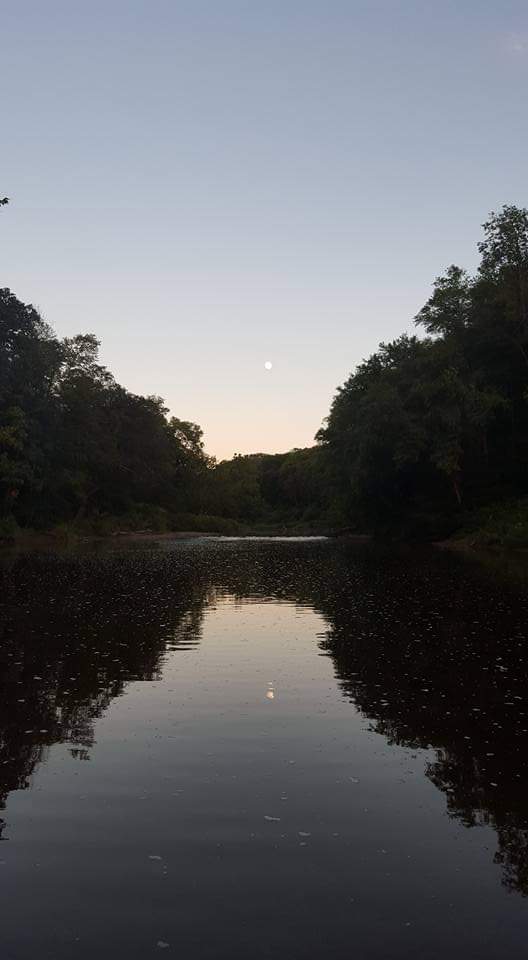 Oh, we were able to get back to God’s Country on occasion. Dad bought a pop-up camper and, with my brother, we would return to Potter County, hiding out deep in the Prouty, trout fishing, digging wild leeks, frying our catch in bacon and leeks over an open campfire, visiting places of our past.

Thanks to my forefathers, I inherited my love for these mountains. Every time I hike these mountains, there is a profound sense of the past and of those who came before. It’s almost as though I can feel their presence. 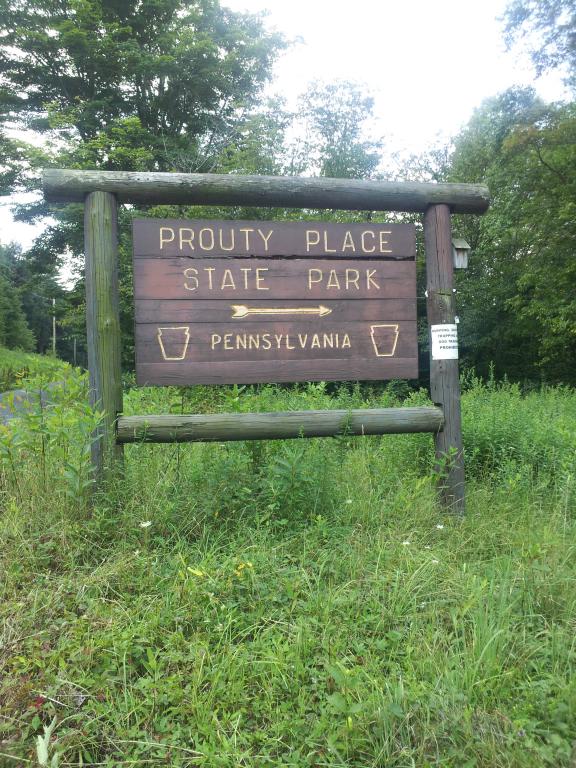 Today, as I approach the very age when Grandpa left us, he was right about there being magic in those mountains. As he said many times, “They don’t call it God’s Country for nothing.”

It’s so easy to see why so many people have a special love, awe, and reverence for the beauty of the Pennsylvania Wilds.

My Dad was one of those people. He left us in 2013 and I remember him saying so many times around so many late-night campfires, “If you want to see me and talk to me after I’m gone, just come down to the creek, that’s where I’ll be.”

In 2014, we gathered to scatter his ashes on the grounds of the family camp on the banks of the Tionesta Creek. It was his final wish.

On occasion, I visit. Maybe, if I’m lucky, I’ll catch a fleeting glimpse, perhaps hear his voice, revisiting the good times and all those magical mountain memories.