Headwaters Mountain: The Triple Continental Divide of the Pennsylvania Wilds

Raindrops fall to earth on “headwaters mountain” near the northern Potter County village of Gold in the Pennsylvania Wilds Dark Skies landscape. At an elevation of nearly 2,500 feet, it’s amazing the direction those raindrops go, how far they travel and where they end up.

This is something geologically unique to these Pennsylvania Wilds because Potter County is home to the only Triple Continental Divide east of the Mississippi River, where rainfall travels in three separate directions to the sea.

At the end of a gravel road, in a pasture atop the mountain, raindrops falling in the same area, a mere few inches apart, will merge into one of three springs. All within less than a thousand yards of one another, the descent of these three springs becomes the starting point for three major rivers and primary watershed divides, one north, one west, the other east. 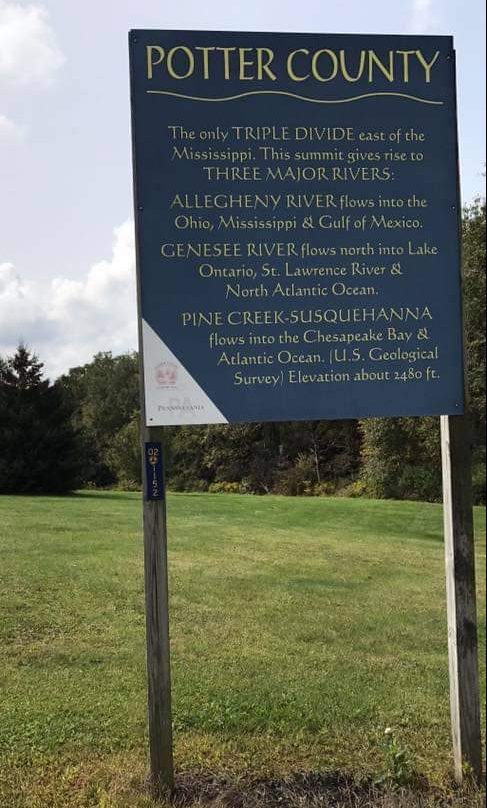 “If this very spot was located on a manicured golf green and not a pasture, and if a golf ball was dropped on this spot, it would roll in the direction of one of those three springs,” said Williamsport mapmaker Larry Seaman, who along with Karl Ings writes and publishes Professor Higbee’s Stream and Lake Maps, the most detailed waterway maps available in the United States.

Seaman and Ings were able to pinpoint and eventually find the Triple Continental Divide location after deciding to go for a ride one day to explore an unusual spot appearing on one of their Potter County maps.

“After driving around in circles for at least an hour,” explained Karl, “we finally located the headwaters at the end of that gravel road on top of the mountain. Yes, even mapmakers get lost occasionally.”

Three tiny springs eventually become small brooks, then large streams, which become whole rivers that go to one of three seas, the Atlantic Ocean, the Gulf of Mexico and the North Atlantic Ocean.

One of the headwaters mountain springs forms the Allegheny River. It is where the river begins its meandering 320-mile journey to Pittsburgh. I well remember as a young boy my grandfather took me to this very spot, which is no more than a foot-wide, so I could boast that I “stepped across the Allegheny River.”

The Allegheny passes through Coudersport, winding its way briefly through southern New York State then through the Kinzua Dam, through a portion of Pennsylvania Wilds Allegheny National Forest and Surrounds landscape, south to Pittsburgh before joining the Ohio River, where it joins the Mississippi River and ends up in the Gulf of Mexico.

Another spring on the mountain forms Pine Creek (formerly known as Tiadaghton) in the Pennsylvania Wilds Pine Creek Valley and PA Grand Canyon landscape, which goes to the West Branch of the Susquehanna, then to the Susquehanna River, on to the Potomac River and into Chesapeake Bay, before ending up in the Atlantic Ocean.

The third spring travels north and forms the Genesee River, which flows up through New York state to Lake Ontario then to the St. Lawrence Seaway before heading out into the North Atlantic Ocean.

All three springs are on private property and the location is recognized as a sacred place in many cultures and religions, especially among Potter County’s Native Americans. For centuries, they told of just how sacred this spot is to them. The legend of the triple divide and how three mighty rivers from three tiny headwaters mountain springs got their names, comes from the book Black Forest Souvenirs, (Gateway Press, Baltimore, 1991) first published in 1914 by Henry W. Shoemaker. The legend is detailed in the chapter, “The Legend of the Three Springs.”

It begins, that on this mountaintop in Seneca country lived a wise Native American chief named Nahimen, who was gifted with the power of second sight. He saw so clearly into the future that it often caused him misery.

A widower with three beautiful daughters, Nahimen was saddened when he foresaw the future of his daughters, Gay-nay-sayo (Genesee), Allie-gay-nay (Allegheny) and Tya-dahg-tun (Tiadaghton). They were all destined to fall in with evil associates and become corrupted. This was also communicated to him through his late wife’s spirit as she spoke to him often.

The only way to save their daughters from an awful fate, she said, was to change them into “something everlasting such as a tree, a rock or a river.” This could be done with the aid of Alliakquot, an elderly sorceress, she said.

Nahimen chose rivers, which would flow on forever and ensure the daughters’ immortality. The daughters accepted this fate, knowing their mother’s spirit had spoken and theirs would be a noble destiny. They kissed their father Nahimen goodbye. That night, the sorceress Alliakquot worked her magic completing the transformation. Nahimen had saved his daughters from becoming “the prey of scheming and wicked men.”

The next morning at first light, Nahimen found three springs. When he bent over each spring, he saw the faces of his daughters reflected in their watery depths. They appeared joyous and happy.

Feeling the companionship of his daughters-of-water, Nahimen died as he lay upon buffalo hides in his lodge, listening to the three streams as they cheerfully flowed over mossy rocks on their way down the mountain.

Legend has it that Nahimen was buried atop headwaters mountain near where the three springs rose and mapmaker Larry Seaman recalls standing at this exact location, “The end of this story mentions a high point between the springs as the chief’s resting spot.  The spot we were at was also the high point and could possibly be the chief’s final resting place. Amazingly, it is the exact pivot point for the three major watershed boundaries,” explained Larry.

WATER QUALITY AT THE TRIPLE DIVIDE

As the early settlers arrived, agriculture became a way of life and continues today in Potter County. Understandably, water quality is of prime concern.

In September it was announced that Potter and Tioga counties will be part of a national “Water for Agriculture” study. The study holds the potential to not only help farmers with water management issues – both quantity and quality — but also breaks down some of the barriers that have isolated farmers from government regulators and communities.

In recent years, when natural gas drilling companies moved into Potter County, residents and officials alike welcomed the new jobs, but also grew concerned about the impact on the local water supply. Two agencies, based in nearby Coudersport, are devoting much time and resource to ensuring that the water quality in the Triple Divide region remains as pure as possible.

One of them, the Triple Divide Watershed Coalition (TDWC), was formed in 2011 to protect public drinking water sources within the headwaters region of the Allegheny, Genesee and Susquehanna River systems. The Coalition consists of representatives from each of nine area community water suppliers, County government, Department of Environmental Protection, the Penn State Extension and the Potter County Conservation District. The TDWC earned high honors, winning the Pennsylvania Governor’s Award for Local Government Excellence, but its work had only begun.

“The Coalition seeks to preserve the county’s principal drinking water sources from reductions in both quality and quantity by seeking to reduce potential risks,” said Charlie Tuttle, TWDC associate director. “In 2017, continuous water monitoring equipment was installed at eight of the water supply systems in Potter County. To guarantee the quality of the public drinking water sources standards, conductivity is consistently measured. This data serves as an early detection system for any possible contaminants or threats.”

“Our small staff and myself wear many hats to best serve the community and better our environment,” said Emily. “The District organizes educational programs, events and outreach opportunities throughout the county. We oversee water quality monitoring efforts, often used as an educational tool and work closely with watershed associations.”

Emily said that the love and pride she has witnessed by Potter County residents and camp owners is reason to have hope for a future of sustainability. “A significant percentage of Potter County streams are of exceptional value therefore water quality is at the core of our work,” said Emily. “The Triple Divide serves as a powerful facet of our connection with the Potter County landscape, and is certainly one more exceptional feature we aim to uphold.”

As the year closes

2 thoughts on “Headwaters Mountain: The Triple Continental Divide of the Pennsylvania Wilds”