Out of all the local ghost stories you hear, one of the most exciting is always the haunted jail. You’ll hear about them everywhere—Philadelphia has one, Jim Thorpe has one, and of course there’s at least one in the Pennsylvania Wilds, as well. Up in Smethport, McKean County, in the Allegheny National Forest & Surrounds landscape of the Pennsylvania Wilds, and very close to Elk Country, there’s a story of a haunted jail.

The thing about haunted jails is that they tend to fall into two categories: the unrepentant criminal and the wrongfully accused. And both come with a little element of thrill; whether the dead man was innocent or not, it generally makes for an exciting story.

The ghost of Ralph Crossmire falls into the “unrepentant” category.

On November 19, 1892, Ralph’s mother, Lucetta Crossmire, was found hanging from a rafter in the family barn. Initially, this was assumed to be a suicide, but further examination revealed that before committing suicide, she’d beaten herself about the head with farm equipment, as well. That was when people started to rethink the theory, and suspicion fell upon Ralph Crossmire.

According to the McKean County Miner, one of the local newspapers at the time, Corssmire was arrested by Deputy Sheriff Clarke on the Monday after the body’s discovery, taken to Smethport, and locked in the jail until his trial. The trial was held in the McKean County courthouse and took three days, each day packed with observers including the media and the curious. The courthouse was a chaotic uproar for the duration of the trial, after which Crossmire was found guilty.

Crossmire never really came right out and denied that he’d committed the crime; instead he simply insulted the testifying witnesses and claimed they were against his family.

Crossmire was locked in his jail cell to await execution. The gallows, to make this whole thing somewhat more morbid, was constructed in the corridor outside his cell, while he got to watch. The morning of December 15, 1893, Ralph Crossmire was led to the gallows, his neck placed in the noose, and then Clarke pulled the lever.

Crossmire was pronounced dead at 10:22 AM. His body was buried in the McKean County Farm Cemetery. But that turned out to not be the end of the story.

(Photo at right provided by the McKean County Historical Society.) 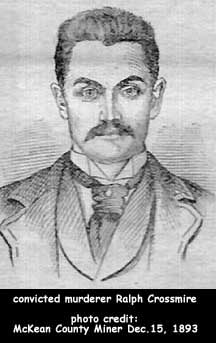 Robert Lyman’s book “Forbidden Land: Strange Events In The Black Forest” states that before being hung, Crossmire made a vow to haunt the jail. Other sources claim that he swore he was innocent of the crime. The local newspaper articles make no mention of this. One article quotes Crossmire as saying,”Father, into thy hands I commend my spirit. I forgive all those who have sinned against me.”

In his book, Lyman reports that an Italian man was the next person locked up in the cell. “The prisoner was terribly frightened one night when Ralph suddenly appeared, stayed a while, and then vanished,” he wrote. “Other inmates also saw him. Panic spread in the cells.”

Today, the jail is the home of the McKean County Historical Society, a museum at 502 West King Street, and unexplained things still happen there. “People seem to hit on the same spot, where bad stuff happened,” says Lu Vandermark of the Historical Society. “Pranks happen, and I’m sure it’s not people doing it. I don’t know if it’s Ralph or some other entity, but he seems to know how the electrical stuff works. Lights go on and off by themselves, and we have an indoor waterfall that the motion detectors recorded coming on. It was two-thirty in the morning, and I guarantee you no living person was in here at that time.”

The old jail, and the arched corridor where Crossmire was hanged, are available for tours. And you never know…. If you drop by, you may encounter the ghost of Ralph Crossmire.