One summer Saturday morning, my son burst into the bedroom far too early. “Guess what day it is today, Daddy?” he announced delightedly. “It’s Kettle Creek day!”

Paul, who just turned five years old, has gotten very attached to Kettle Creek State Park in Leidy Township, Clinton County, practically on the border between Elk Country and Dark Skies landscapes of the Pennsylvania Wilds. We’ve had the opportunity to camp overnight there the past couple of summers, and he gets all excited over it.

We arrived in the early afternoon and got set up. I have this tent that’s approaching twenty years old now. My wife and I bought it before we were married. Call it our starter home. It was labeled something like “Quik ‘N’ Simple E-Z Tent,” and I was shocked to find out that setting up is actually quick, simple, and easy. Most of them require an engineering doctorate, but this one is great. It sets up in under a minute, even with help from a preschooler.

Of course, then, Paul had to spend half an hour making himself at home, taking out the toys he brought, and spreading out the sleeping bags. He was very meticulous with the sleeping bag, in spite of the fact that he was going to spend very little time in it. I know my son, and he sleeps as if he’s dreaming about triathlons. He rolls around and shifts all night, and without a doubt would be curled up in a far corner of the tent by morning. 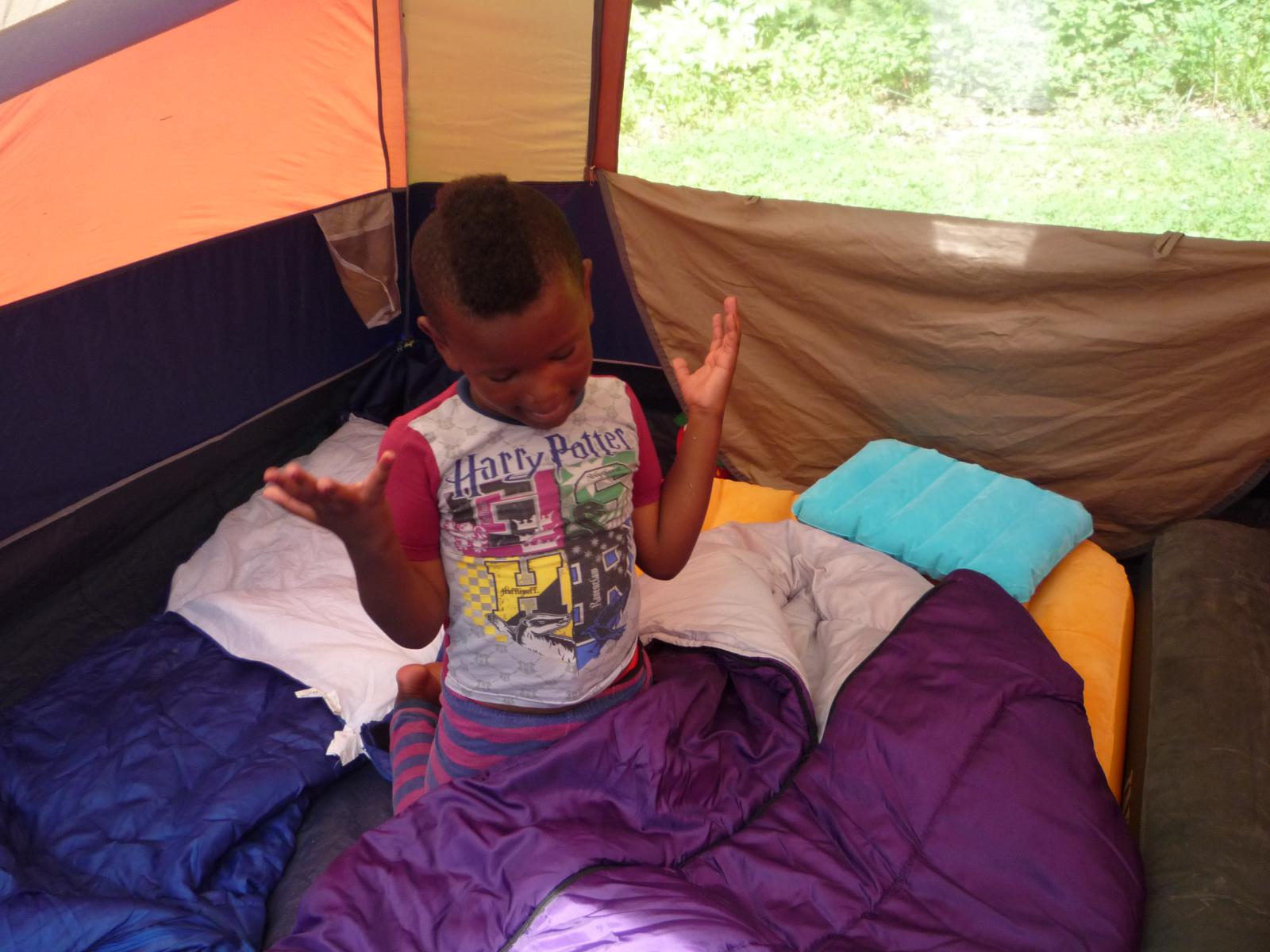 When I went camping before having a child, I looked for good campsites, challenging hikes, and scenic views. Since Paul, I’ve learned to choose our trips based on availability of playgrounds and french fries somewhere in the area.

Fortunately, Kettle Creek has several playgrounds, and we walked down to the one near the dam. The dam was built by the Civilian Conservation Corps in the 1930s, and the previous year we’d spotted a heron there. (Paul referred to it as the “tall bird.”) The playground kept Paul busy for a while until it was time for activities at the nature center. 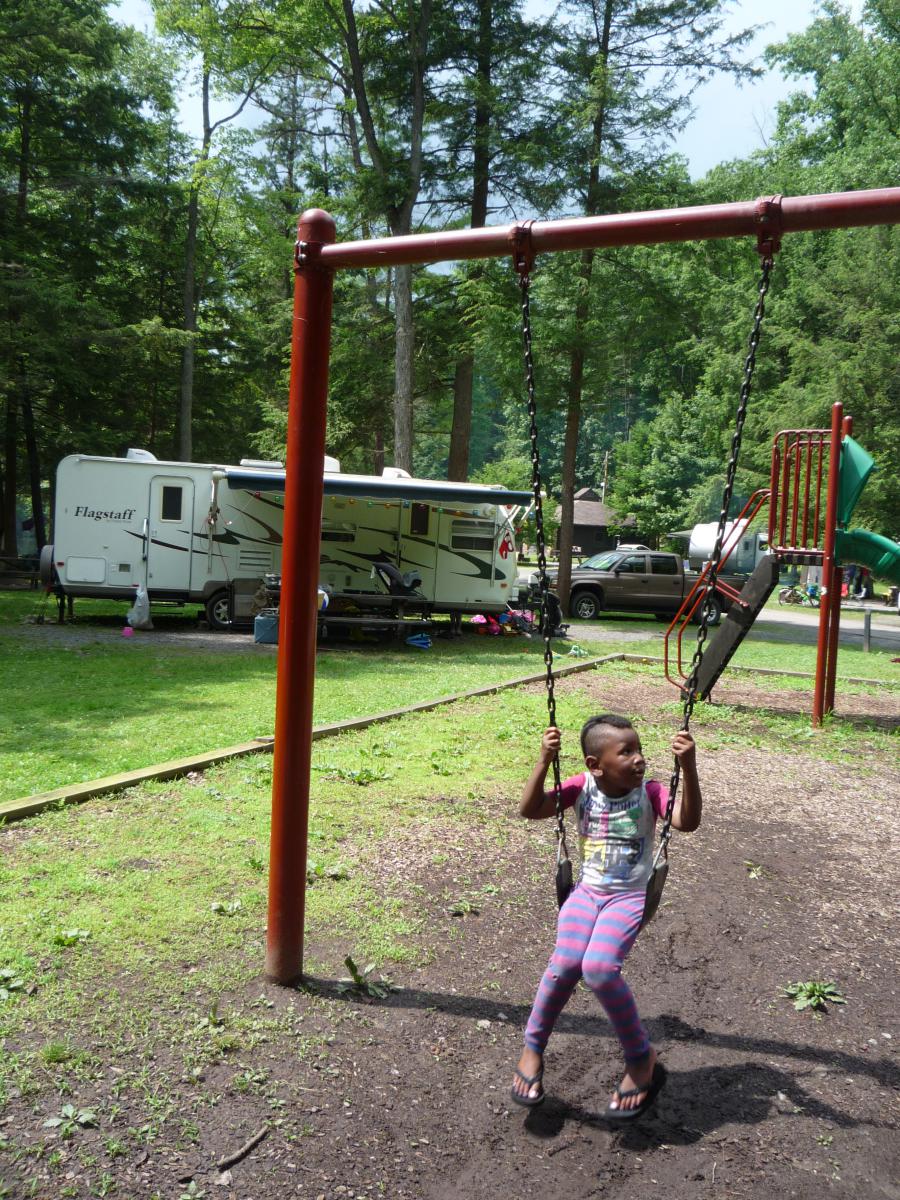 Kettle Creek has a nice little nature center, with displays and activities for children. Paul colored for a while, and then played Bug Bingo, a game led by park employee Ian Loewen. Ian called out the different types of bugs, and Paul checked to see if he had them on his card before getting five in a row. Then the family did a scavenger hunt, again planned by Ian. I chatted a bit with Ian as my wife and son found the items on the hunt.

“We have some great activities coming up today,” said Ian. “As long as the rain holds off.”

I looked at the sky. “Our chances look good. It’ll probably pass right over.”

Twenty minutes later I was sitting in the tent with my family, listening to thunder and worrying that the rain fly might not hold. Trying to make the best of things, I said, ”Look at this, Paul! We’re having an adventure!”

“It’s not an adventure, Daddy,” said Paul. “We’re just sitting in a tent in the rain.”

We’d planned to start a fire and grill some hot dogs for dinner, but the available firewood was wet. Fortunately, I spent my childhood training for situations like this. I knew exactly how to handle this survival situation.

“Forget the fire,” I said. “Let’s drive into town and get pizza.”

We had pizza, but skipped dessert — we were roughing it. The tent had stayed reasonably dry during the storm, which meant that, at bedtime, we could lay down in our sleeping bags and sleep well enough.

When we woke up in the morning, Paul asked,”Can we go see if the tall bird is there?”

He was referring to the heron we’d spotted last year. Kettle Creek is full of wildlife, which is a selling point for my son. He loves seeing new animals.

And, amazingly, we spotted the heron. Or a heron, at least, which is enough for my son. We saw the tall bird standing across the creek, just under the dam, waiting to catch a fish for breakfast. As we watched him, I felt Paul’s small hand slip into my own.

“This was a fun camping trip, Daddy,” he said. “Can we come back next year?”

And that’s the nice thing about taking these trips.  Even when everything goes wrong — storms, no fire — you’re still out experiencing and learning, spending time with family and friends. Even when the trip isn’t perfect, it’s still worth taking. Just ask Paul.