Eliot Ness’s legacy is huge in Coudersport. He was the federal agent who nabbed Chicago gangster Al Capone and later went on to a celebrated career as Cleveland’s top law-enforcement officer.

First came Chicago, then Cleveland, then Coudersport – and eventually Hollywood. This is the stuff of which legends are made.

Kevin Costner starred as Ness in the blockbuster movie “The Untouchables,” and Robert Stack played the role of Ness in the Emmy Award-winning TV series of the same name. The TV series aired on ABC from 1959 to 1963 with “Special Agent Ness and his elite team of incorruptible agents battling organized crime.” Ever since, there have been stage productions and other adaptations made famous by the Untouchables TV series and movie.

In 1956, Ness left his Cleveland law-enforcement post and moved to Coudersport with wife Betty and son Bobby.  Ness was lured to Coudersport by North Ridge Industrial Corporation, a watermarking company, hoping to capitalize on Ness’s big name and national reputation.

North Ridge needed a guy like Ness. The company was a mess and failing. It didn’t take Ness long to see it. He became disillusioned with the direction in which things were headed. He was depressed, often lamenting the ineptitude of company managers to his friends at the local coffee shops and taverns. At the pubs, the conversation sometimes turned to Ness’s earlier career and, with a little nudge, he would regale the crowd with stories about fighting Chicago gangsters.

One of those who heard Ness’s tales was Oscar Fraley, a United Press International sportswriter who had a reputation for playing fast and loose with facts. After several scotch and waters one night in the Hotel Crittenden Taproom, Fraley persuaded Ness to help write a book about his crime-fighting days.

Fraley, seeing dollar signs, went to work in a room at the Hotel Crittenden with a typewriter and bottle of scotch, embellishing Ness’s Chicago crime-fighting triumphs, creating a legend, which became known as “The Untouchables” and Ness, the larger-than-life tough guy. Sensing he had a literary goldmine on his hands and knowing Ness was broke and needed money, Fraley played it for all it was worth.

But Ness didn’t like the way Fraley was framing the stories. He felt Fraley’s distortions made him look like a “Superman” type of crime-fighting hero, something Ness insisted was far from the truth.

Ness never lived long enough to realize his sudden fame. He died on the kitchen floor of his Third Street home on May 16, 1957. The Potter County coroner ruled the cause of death “heart failure.” Ness was only 54. His body was cremated, his ashes sent back to Cleveland, and his wife and son later moved out of Coudersport.

Fraley’s book came out shortly after Ness’s death. Hollywood ate it up.

While the book was not an immediate big seller, it caught the eye of Desi Arnaz, who with wife Lucille Ball’s Desilu Productions, brought the story of Eliot Ness and “The Untouchables” to television and into living rooms across the nation. The series was a TV ratings hit.

As Ness’s original biographer Paul W. Heimel wrote in his 2018 book, Behind the Badge – the Untold Story of Eliot Ness, “For more than a half-century Coudersport has been known as ‘the town where Eliot Ness died,’ only a handful of researchers know the truth: it’s really the town where the mythical Eliot Ness – that is, the Hollywood incarnation was born.

“Personally, as Eliot Ness’s biographer, and lifelong Potter County resident, it’s gratifying to see that so many people have an interest in the man instead of merely the myth,” explains Heimel. “Behind the legend is a significant American hero who was a fearless, effective and incorruptible lawman.”

Heimel and a handful of other community leaders have for years believed that Coudersport could pay tribute to Ness in the form of a town festival. In 2017, an idea became talk and talk became action. A festival committee soon took shape and an idea took off.

“Because it was developed to be an annual event,” explained Heimel, “we were intent on having it presented as an effective combination of entertainment, education on law enforcement and public safety, and a unique celebration and recognition of our special place in history as the town where Eliot Ness chose to spend the rest of his life.”

At last year’s inaugural Ness Fest, there was a little something for everyone; costumed characters conducting street-theatre prohibition-era raids, “Ness and his men” taking down gangster Capone, dozens of beautiful vintage automobiles from the Ness-Capone era lining Main Street and lending an air of authenticity to the event. The modern-day law enforcement presence was huge, complete with Federal ATF agents and the traveling Cleveland Police Museum.

The area of the Courthouse grounds was a buzz of activity. There was a Saturday parade and a re-enactment of the trial of Capone inside the Potter County Courthouse. In addition to food, fireworks law enforcement displays and vendors, there was a self-guided tour of Ness’s last walk to his house on Third Street. An estimated 4,000 people poured into downtown Coudersport to take it all in. 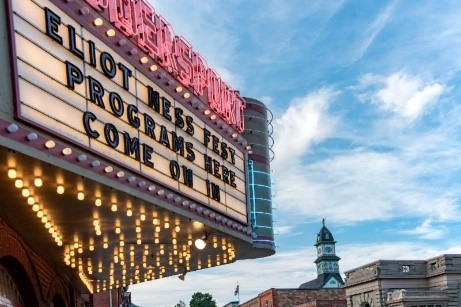 (Above: Images from the 2018 Eliot Ness Fest depict individuals in era clothing and the theater marquee for the event. Courtesy of photographer Curt Weinhold.)

Jennifer Rossman, Potter County Community Development Director, said she saw visitors and locals totally engaged with what was taking place at any given time or during any given activity.

“I felt that the community had come together in a way that I have not seen in many, many years in Coudersport,” said Jennifer. “Before the festival, and with perfect timing, many businesses that had engaged in the PA Route 6 and Pennsylvania Wilds Façade Program were sprucing up their buildings, which led to many other property owners doing the same. Truly, every person that I spoke with or heard from following the festival was so excited to have attended and described the great time they had.”

Fast-forward to today. Heimel, a lifelong Potter County resident, current county commissioner, and former editor of the Leader-Enterprise newspaper in Coudersport, along with a dedicated committee of volunteers, are busy putting together Eliot Ness Fest II.

This year the three-day festival is set for July 19-21 in downtown Coudersport, and Heimel is one of the driving forces behind the festival, which promises a stellar program of events.

Plans are progressing to host the first-ever reunion of the descendants of Ness’s band of “Untouchables.”  An expanded law enforcement spotlight is also in the works, headquartered at the courthouse square in a spacious tent, with a broad variety of exhibits, programs, and appearances by special guests, including Ness’s history, courtesy of the Cleveland Police Museum. Law enforcement vehicles of various vintages and types will be displayed.

Colorful historic interpretative bus tours will also be expanded and prominent authors and historians will present fascinating programs at the Coudersport Theatre, where feature films and documentaries will air all three days. 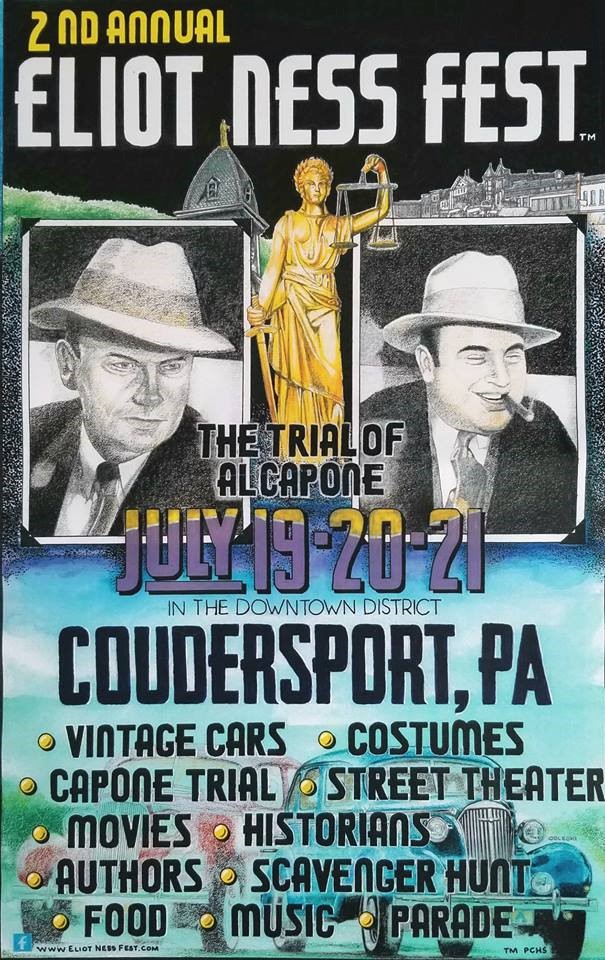 There will be a talent show Friday night where anyone can show off their “roaring 20s” talents. This 1920’s-inspired talent show will feature cash prizes for the winners. The “Untouchables” Talent Show is open to all ages and will be complemented by an Al Capone look-alike contest.

“There are many additions and a return of many of last year’s successful attractions and events. A notable addition is a re-enactment of ‘The People vs. Al Capone,’ a federal court trial that resulted in Public Enemy No. 1 being sent to federal prison,” Heimel said, and he was quick to point out a very special attraction for 2019. 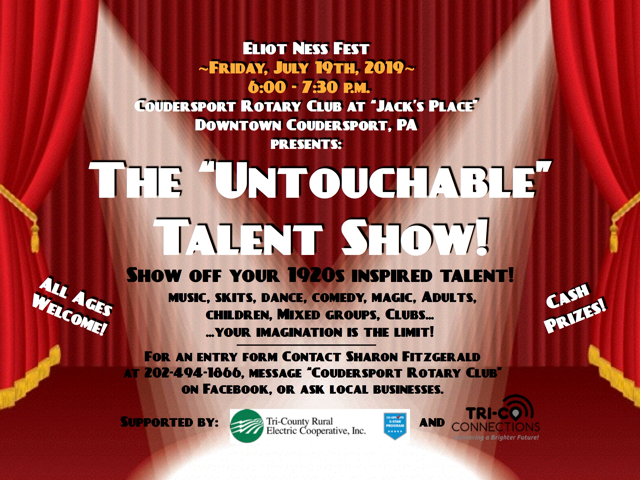 “A second major addition is the debut of a major musical production, ‘Eliot Ness: A Biographical Suite,’ which will celebrate the life and career of Ness with an original, professional live music mosaic,” Heimel explained. “The suite, patterned after Aaron Copland’s ‘Lincoln Suite,’ is part of Friday night’s fascinating ‘A Musical Journey Back to the Roaring ‘20s’ at the Coudersport Theatre. Composer/music arranger is Larry Herbstritt, whose credentials are impressive, to say the least.”

Rossman, whose grandparents were good friends of the Ness family, said seeing the smiles and that palpable sense of pride from the community last year was astounding. “People who didn’t come last year are making plans for this year, and people who did attend last year have promised to return with friends and family in tow.”

“Personally,” Rossman explained, “being part of the Ness Festival Committee and working with so many people who wanted to celebrate the life of Eliot Ness was hugely rewarding for me. I learned so much about a man that truly stood for honesty, hard work, and a better America.”

“In fact, representatives from the U.S. Bureau of Alcohol, Tobacco, Firearms, and Explosives, confirmed as much when they participated in last year’s Eliot Ness Fest – and they’re returning this year,” said Heimel, who is proud of what has been accomplished heading into a second year. 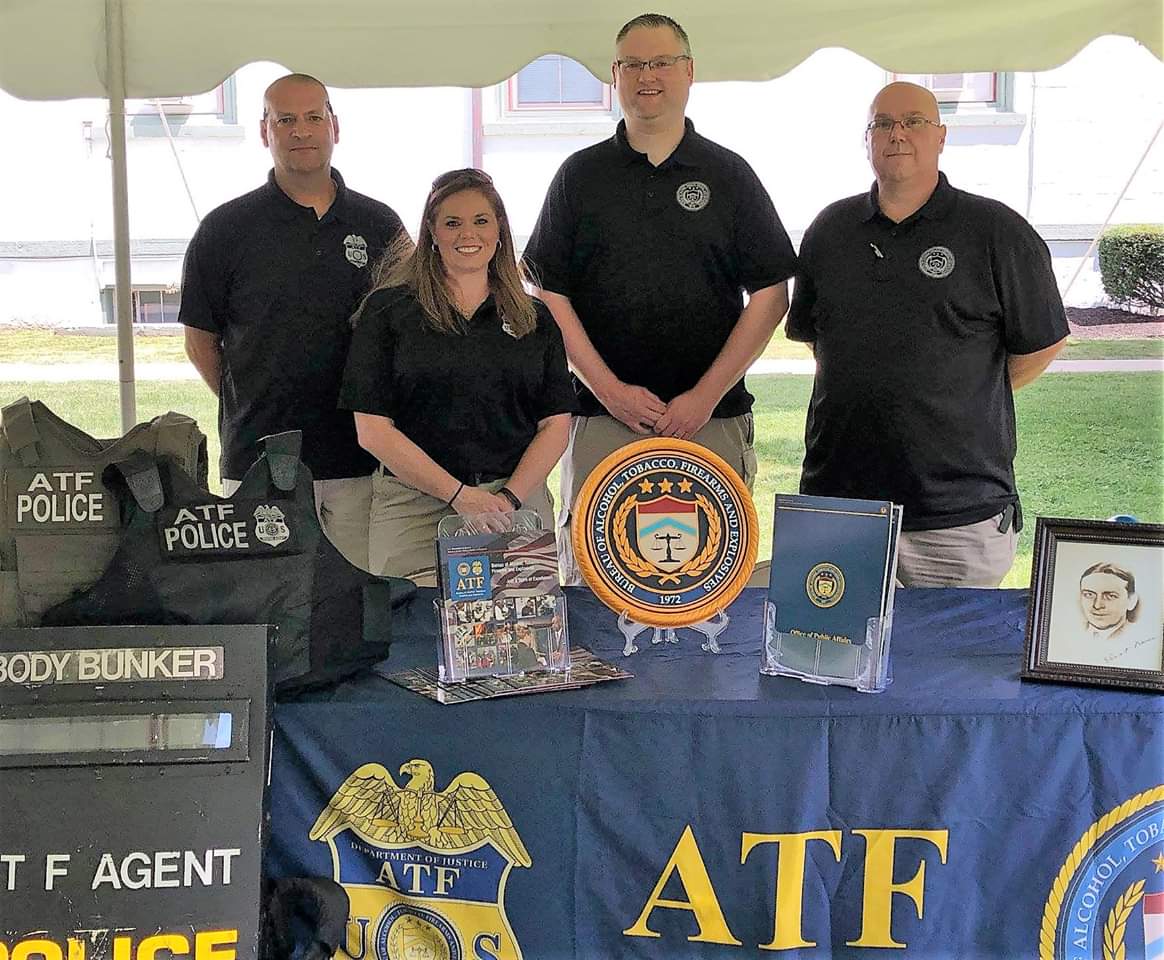 Things promise to get even better for 2020’s festival. “We’re in talks with the Lucille Ball- Desi Arnaz museum in Jamestown (N.Y.) about a partnership for the 2020 Ness Festival celebrating Desi as the guy who actually brought the ‘legendary’ Eliot Ness to TV and movie screens around the world by recognizing the marketability of his true-life story,” Heimel said. “This festival shows great potential to be one of the biggest annual attractions in the Pennsylvania Wilds.”

Visiting Elk Country? Check out these tips from a local wild elk photographer