Collins/Kane Hardwoods in the PA Wilds:  Where You Can See the Forest for the Trees 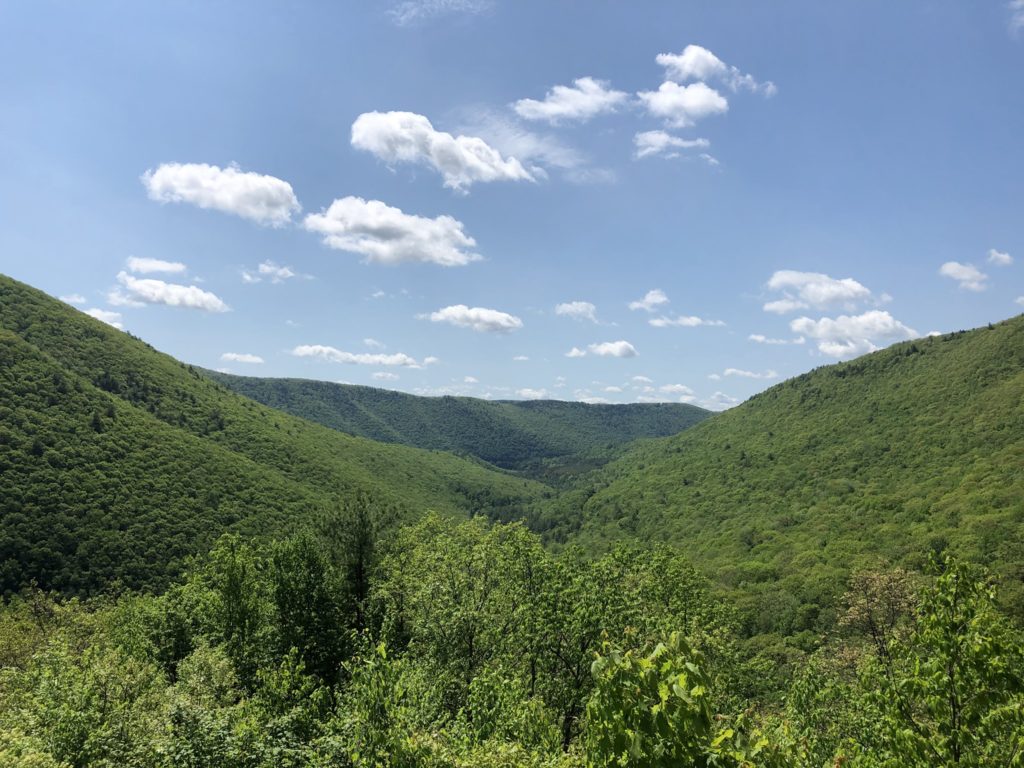 “Nowhere else in this country, from sea to sea, does nature comfort us with such assurance of plenty, such rich and tranquil beauty as in those unsung, unpainted hills of Pennsylvania.”  – Rebecca Harding David (1831-1910), American Author and Pennsylvania native

The history and culture of our scenic Pennsylvania Wilds are deeply rooted in the forests and the vast timber resources and wood product industries that have flourished around it.

With some of the best hardwood forests in the world, Pennsylvania is the largest producer of hardwoods in the country, accounting for 10 percent of the total hardwood output in the United States.

Our Lumber Heritage Region, one of the state’s 12 designated Heritage Areas (pictured at right), was established to build awareness of our hardwood market and keep the economic impact of our region at the forefront.

Here in the Wilds, Collins/Kane Hardwood in the Pennsylvania Wilds’ Allegheny National Forest and Surrounds landscape, is a major economic player in this market providing bark, sawdust, wood chips, rail ties, pallet lumber and grade hardwood lumber at the wholesale level. Most of their logs are processed at its hardwood facility in Kane, which enhances the local economy and has continued to do so for many years. 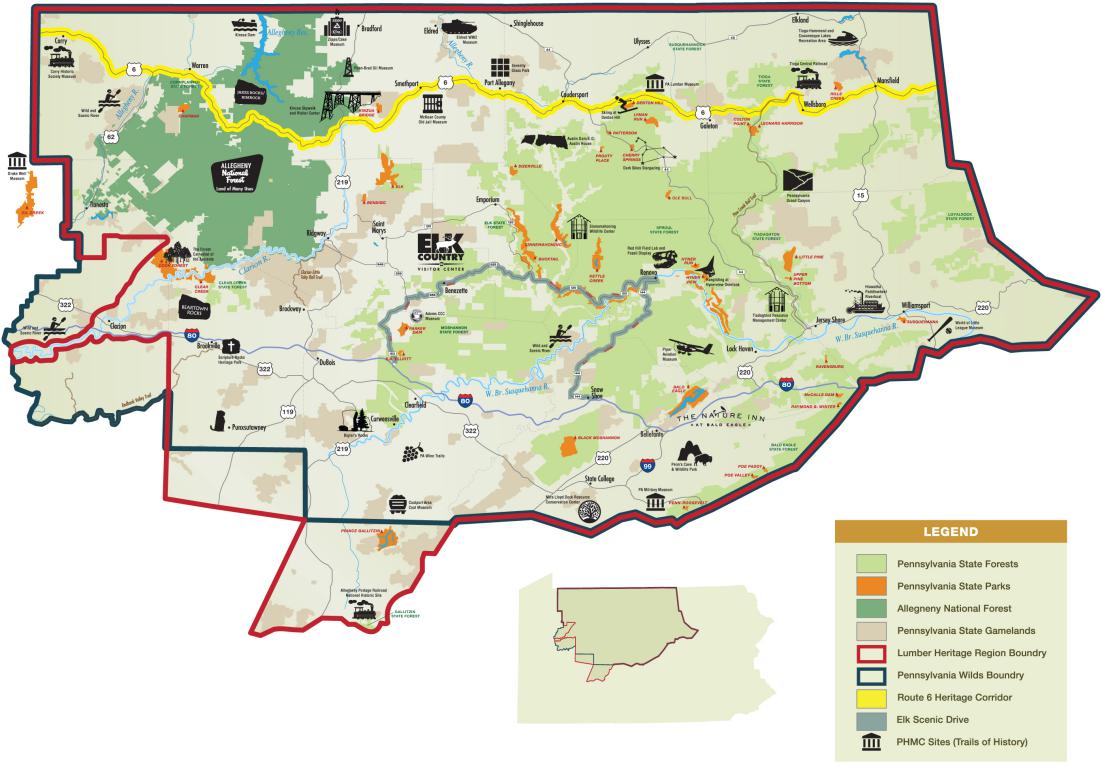 Kane and the 50-mile radius surrounding it is known as “The Black Cherry Capital of the World,” officially designated by the state legislature as such in the early 1990s (below left). It is still true today, although the market is much softer than its peak in the early 2000s. However, the region still produces 80 percent of all cherry hardwood in the world.

Started by T.D. “Teddy” Collins (below center) in Forest County’s Tionesta Creek Valley (below right) in 1855, the Collins company operated in the area until the 1930s, before moving westward. But after WWII, Collins became active in Pennsylvania again, and since 1950, has added over 90,000 acres to its Collins Pennsylvania Forest.

Before Teddy Collins died in 1914, he owned several sawmills and it was said that Teddy ‘owned’ the entire Tionesta Creek Valley. His life was co-existent with the history of Forest County. Described in the company’s written history as ‘a bit crusty and frugal’, Teddy became a millionaire lumberman whose holdings would eventually make him the largest private landowner in Pennsylvania.

Today, Collins/Kane’s total acreage is about 118,000 acres in seven counties. The company employs nearly 80 people directly, 35 contractors along with 300 vendors and suppliers.

Most of Collins/Kane’s land is open to public use for camping, hunting, fishing, hiking, horseback riding, or any other non-motorized outdoor recreation use. The land has been certified by the Forest Stewardship Council (FSC) as sustainably managed forests since 1995 — the first in Pennsylvania, earning it a PA Wilds Champion Award for Conservation in 2014. 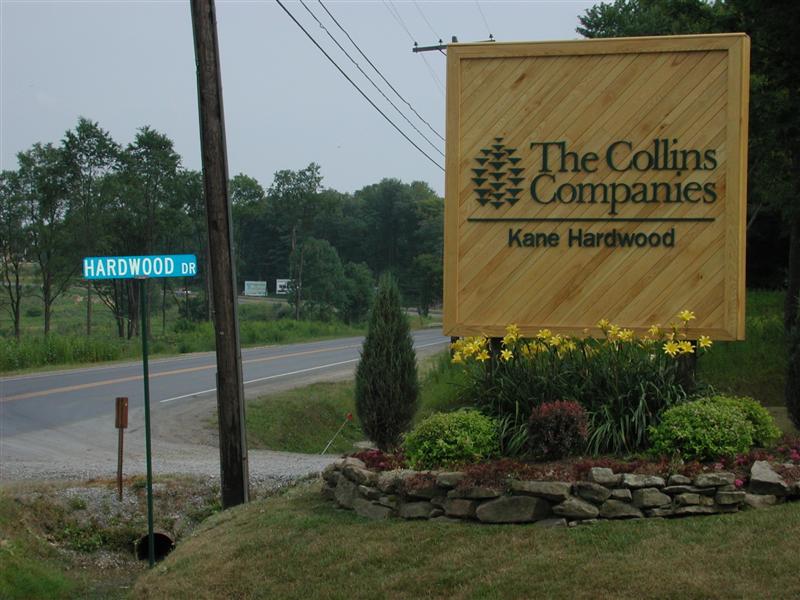 “When marketing the Pennsylvania Wilds as a destination we try to be very mindful to orient potential visitors that we are a working forest,” says PA Wilds Center Founder and CEO Ta Enos. “Log trucks are a ubiquitous sight here. Logging is part of our history, our culture and our present day economy, on both public and private lands. Sustainable forestry is a huge part of our region’s conservation legacy. A lot of people associate our region with public lands, but sustainably managed private forest lands are also critical to our rural working forest landscape in terms of wildlife habitat, watershed, climate resilience, recreation, tax base, sense of place, and of course, timber. The Collins Company/Kane Hardwood’s commitment to sustainable forest management  and to its communities is inspiring. We are fortunate to have them based here in the PA Wilds.”

Kane Hardwoods/Collins Pine, is one of the founding members of the Allegheny Hardwood Utilization Group (AHUG), a non-profit organization formed in 1985 and originally housed at Kane Hardwoods, to support the region’s vital hardwood industry through promotion, education and economic development initiatives.

“The company and its employees have generously devoted time, talent and financial resources towards our mission for more than 35 years, and are heavily involved in some of the most impactful programs held in our region, including the Kane Area Logger Safety Meeting and the Roach Bauer Forestry Forum,” said Amy Shields, Executive Director at AHUG. “Not only a nationally respected producer of high-quality Pennsylvania wood products, Kane Hardwoods/Collins Pine leads by example through their participation in sustainability and forest health initiatives on their corporate timberlands, including the Kinzua Quality Deer Cooperative and the Allegheny Forest Health Coalition.”

One of those who knows the land better than anyone is Tom Kase, Collins/Kane Hardwood’s Resource Manager. An avid supporter of the PA Wilds efforts and programs through the years, Kase also serves as Kane’s Borough Council President and was the recipient of the PA Wilds Champion Award for Outstanding Leadership in 2018.

It is quite evident that Kase and Collins/Kane lead by example. 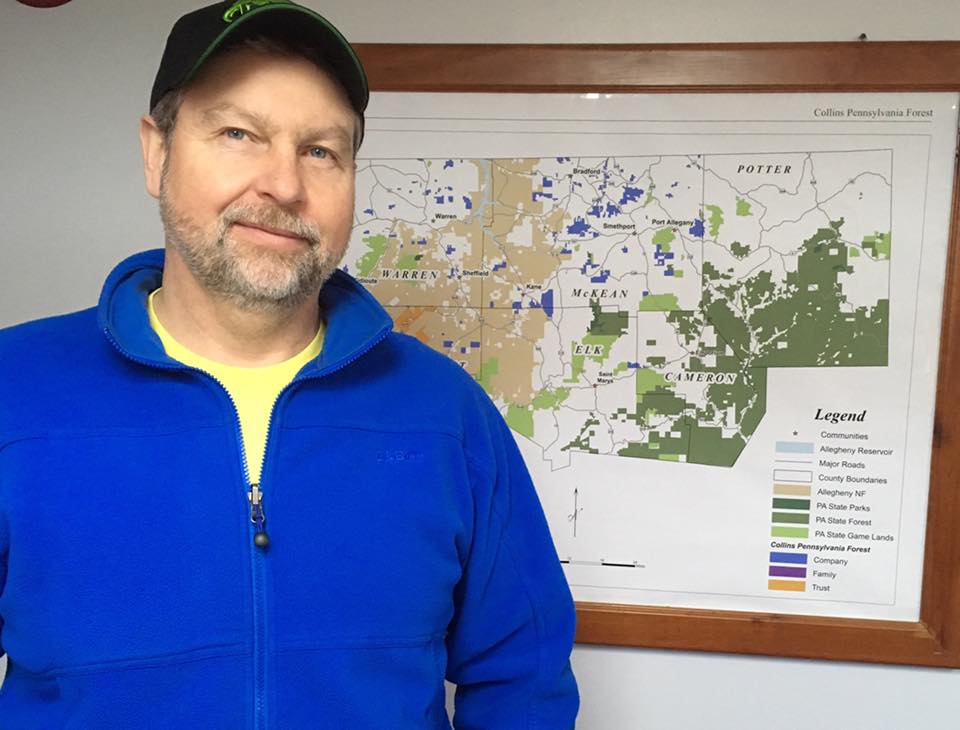 “Collins supports the efforts of our employees who are involved in their communities,” said Kase. “We want the communities where our employees live to be vibrant and healthy, providing for a good quality of life. A Collins employee serving the community reflects well on the company and demonstrates the type of people they employ.”

Not only does the company provide jobs, but it also has a foundation that invests in Kane and community projects, which have greatly contributed to the revitalization and positive movement of the Kane area.

Kane Mayor Brandy Schimp said the foundation has had a profound positive impact on the town in many ways. “The Collins Companies Foundation (TCCF) has been an incredible asset to a wide variety of local projects, nonprofits and community initiatives.  The company is a valued partner and we are grateful for the significant contributions made to our area over the years,” explains Mayor Schimp. “It isn’t just employment, it’s good-paying jobs that support families and attract families to live here.”

“It’s not often to find a large-scale business that puts such a tremendous value on stewardship the way that Collins Pine has done for so many years,” said Mayor Schimp, “The company understands and embraces the incredible importance it has to our community and strives to go above and beyond when it comes to supporting local efforts.”

“Their [Collins/Kane] Resource Manager [Kase] is on our KAIDC Board of Directors and that has helped with communication and collaboration with Kane Hardwood,” said Kennedy. “We have promoted job openings and they have been part of some of our projects, such as the recent Facebook business spotlight photo series to promote businesses during COVID-19. They support our events and we have a positive relationship.”

“The creation of a thousand forests is in one acorn.”― Ralph Waldo Emerson

The Pennsylvania Wilds timber industry represents a commitment to conservation that dates back nearly a century. Regarded as the ultimate renewable resource, healthy forests are the goal. The primary purpose of Collins land ownership is to grow and harvest timber on a sustainable basis and, historically, Collins/Kane Hardwood is a key player in sustainable forestry.

“Our new seedlings are planted by God,” said Kase. He explained that, as foresters, they manipulate the light conditions with a harvest. Shelterwood cutting allows extra light to penetrate the forest floor, which allows the tree seeds to germinate and produce seedlings.

“These seedlings are given a few years to grow and then we go out and count them by species,” said Kase. “This is done as a sample on six-foot radius plots, and then statistically we determine if there are enough seedlings to remove more of the mature trees to give them enough sunlight to continue to grow to maturity.” 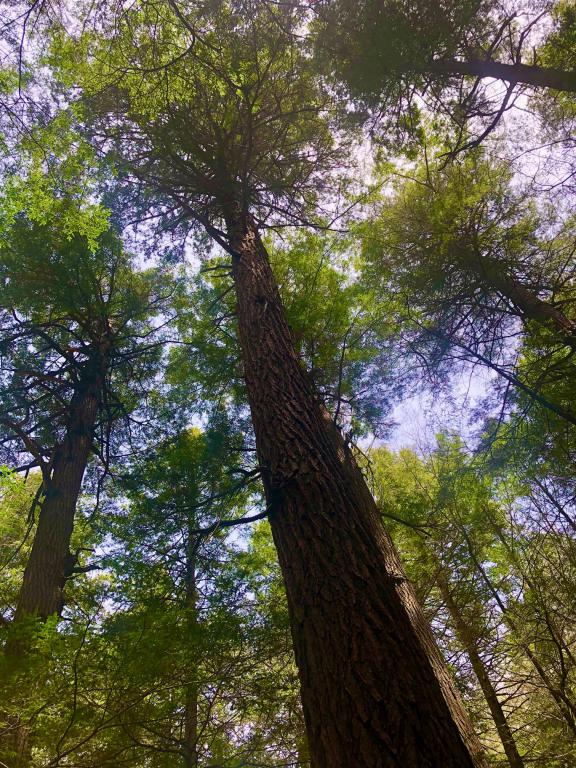 Kase said they then leave some of the mature trees on the land to become part of the new young forest. “These older trees we leave may be selected because they are a minority species in the forest, they provide food and/or cavities for wildlife, or they may be a smaller tree with a good form that can continue to grow into a larger tree for harvest someday,” said Kase.

Collins’ awareness of the health and welfare of wildlife is important to the company and, as such, Collins has partnered on several projects with another major sustainability player, Kane-based Generations Forestry, an independent consulting forester that manages forests for sustainability.

One of their most successful partnerships is the Kinzua Quality Deer Cooperative (KQDC) in McKean County, which is a group of landowners, forest managers, biologists, hunters, and local businesses. Their credo is, “quality forests, quality deer.” A deer herd balanced to its environment is far more likely to produce trophy specimens than an overpopulation.

Ken Kane is Generations Forestry’s President and is proud of the project’s accomplishments.

“The KQDC is about 73,000 acres of cooperative management, data collection and hunting opportunity to promote sound scientific management of flora and fauna to promote sustainable habitats for a variety of animal and plant species in their native habitat, said Kane. “On a landscape level, our two companies work together on various projects and we both are charter members in the KQDC project since its inception over twenty years ago.”

The cooperative has improved the quality of deer, bucks especially, and is working to improve regeneration of valuable timber species as well as rare forest plants. By keeping deer populations in balance with their habitat, hunters provide a key ecosystem service that promotes forest biodiversity by lessening browse intensity.

No doubt, the struggle has been real for businesses all-across the PA Wilds, but Kase says he believes Collins is well-positioned for the future, despite the craziness of today’s pandemic. “We have a good mix of customers, domestic and foreign, to help us to continue to produce sawmill products and logs,” explained Kase.

Personally, Kase considers himself a lucky guy, saying there is no place more relaxing and better than being in the expansive forests of these Pennsylvania Wilds.

“Much of my personal time is spent there biking, hiking and cross-country skiing. My wife, Sandy, and I often have discussions about how lucky we are to live and work in a place where we feel like we are on vacation when we go outside to recreate!” he said.

Kase says there are other benefits, too, for the well-being of both body and mind. “Time spent in the forest is good for your health in many ways, both physically and mentally.  The Japanese have a term for this, it is called ‘forest bathing.’  I feel fortunate that my career and my hobbies have allowed me to ‘bathe’ in the forest regularly!” 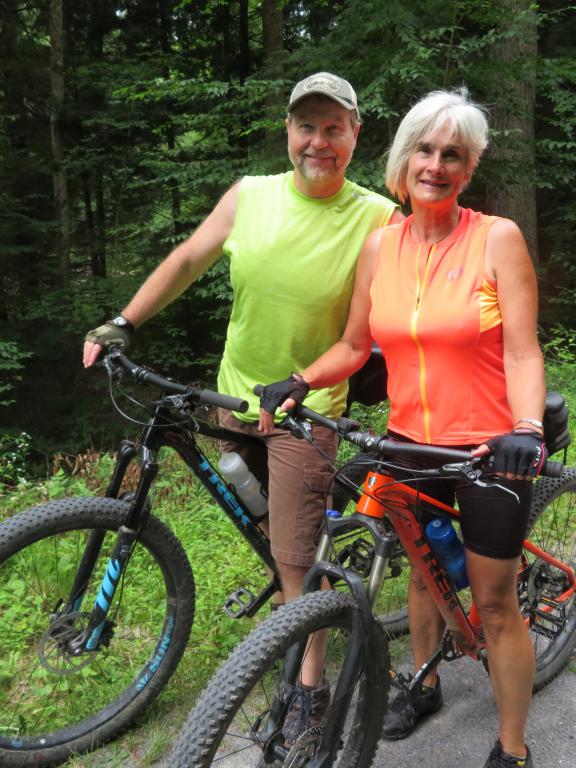 Throughout the decades, the Collins family’s legendary commitment to the Wilds is somewhat of a visionary role dating back to 1943 when Truman W. Collins, Teddy Collins’ grandson, wrote the following words that the company holds dear to this day:

“Our mission is to manage forests sustainably. Nurture the forest’s biodiversity. Help create a stable workforce that builds healthy communities where families can work and thrive. Foster loyalty and trust simply by being loyal and trustworthy. Leave the Earth better for our being here. That is our vision and that is our promise to you.” – Truman W. Collins.

CleanScapes shows how little acts can make a big difference.