Plenty of people celebrate the Fourth of July. On the day our country was founded, its citizens fill swimming pools, crack out their grills, open a beer, and gather with friends and family.

And communities plan their own celebrations as well. Throughout the Pennsylvania Wilds, various cities and communities will hold festivals and events, almost all of which will conclude with bright fireworks displays.

Clarion, which borders the I-80 Frontier and Cook Forest and the Ancients landscapes, holds the “I Love Clarion” celebration, which will be on July 3 at the Clarion University Memorial Stadium. Held by the Clarion Area Chamber of Business and Industry, it begins at five PM with vendors, music, and games, and includes a fireworks show at dusk.

In Brockway, another community flanking the borders of the I-80 Frontier and Cook Forest and the Ancients landscapes, the Old-Fashioned Fourth of July is a must-see. The Fourth of July will be crammed with events, including sports and marathons, car and truck shows, quilt and craft shows, and a pirate ship adventure. A parade at six PM and fireworks after dark complete the event.

The City of Williamsport, which lines the I-80 Frontier and Pine Creek Valley and PA Grand Canyon landscapes, has a collection of events not to be missed during its “Set the Night to Music” event, which  begins at 3 p.m. and features fireworks at 9:45. Food, music, and celebrations make this already fun town even better for the Fourth.

Travel to the Dark Skies landscape on July 5-6 to experience the Galeton Independence Day Celebration. The event is held at the John J. Collins Park in downtown and features music, food and rides, as well as a parade and fireworks.

On July 6, Clearfield County will hold its Independence Day Celebration at Bilger’s Rocks in Grampian, located along the I-80 Frontier. This event will feature games and contests, and it of course culminates in fireworks!

The Lock Haven area will celebrate Riverfest July 11-13. The annual event features arts and crafts, food, games, live music, cardboard boat races on the West Branch Susquehanna River. Riverfest closes out with fireworks on Saturday evening over the river, where plenty of seating is available at the J. Doyle Corman Amphitheatre along the levee.

Kane, located in the Allegheny National Forest and Surrounds landscape, has an annual “Squatch Fest,” which will be on July 13. A music festival with food, fireworks, and kid-friendly activities, this is an annual event in McKean County that also celebrates Sasquatch.

And if you get to the northwest end of the PA Wilds, still within the Allegheny National Forest and Surrounds, Warren holds one of the biggest and most elaborate July Fourth festivals in the state, running this year from July 4-6. 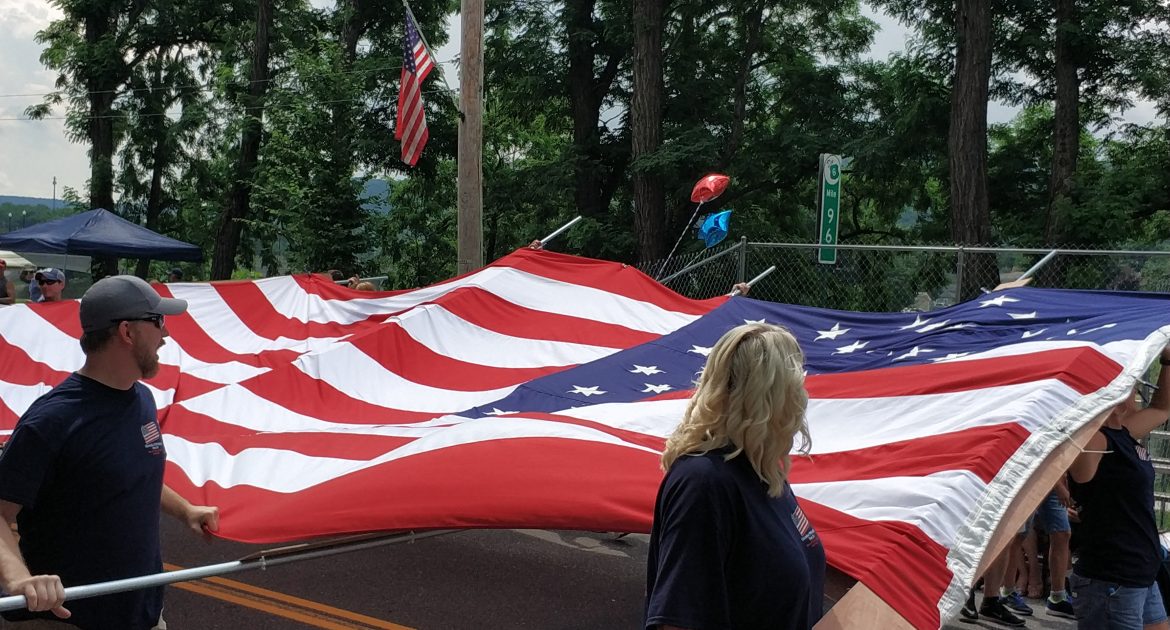 (Images above of the Warren’s Independence Day celebrations provided by Lou Bernard and the Warren July Fourth committee.)

The event used to be held by the Warren Jaycees, who ran the event for years. They went out of business in 2007, so local community members formed and group and picked up the event.

Beginning with a parade downtown on the morning of July 4th, the festival moves to Betts Park and continues for three days. Betts Park, where most of the festival is held, is at 100 Ludlow Street in Warren. The parade is one of the “best in the state,” according to Post, with community groups and organizations all participating. It’s so popular in the community that folding chairs begin appearing on the street days before the actual event, reserving the viewing space well in advance.

At 10 p.m. on Saturday, July 6, Warren will stage an elaborate fireworks show that is well worth seeing. You’ll want to arrive early, as parking is at a premium. Fortunately, with vendors and games, there are plenty of activities to keep everyone busy throughout the day.

If you know of other July Fourth events not mentioned here, please feel free to mention them in the comments. Have a happy and safe Independence Day out there in the Pennsylvania Wilds.