Calder: The Elk Country town that never was

There was a community once… except there wasn’t. It never existed, though the name was created. It would have been in present-day Elk Country, had it existed. But it never did, and now some of the few remnants of it is visible in the present-day I-80 Frontier.

If this sounds confusing, just think how I felt researching this. The remnant is right down the street from my home, actually….So let me tell you about it.

In Lock Haven, Clinton County, on the corner of South Fairview and Linden Streets, there is a sidewalk composed entirely of old brick. People walk by it all the time, and never really take notice. But if you stop and take a look, each brick has the name of the company on it, plus a town where, presumably, the company stood.

Today, near Hunts Run Road outside Emporium in Cameron County, you can find the ruins of the Penn Block Brick Works. It was established in 1898 by a man named Calder, who employed a number of people to manufacture the bricks. Enough people that he built some company homes, and then decided to make a town out of the place: the homes, plus the factory, plus a little of the surrounding area. He chose to name the town after himself, calling it “Calder.”

Calder applied to have a post office placed there. Back then, a post office was a huge step toward founding a community. There are plenty of old boroughs and villages that were, essentially, a post office surrounded by a few houses. The Pennsylvania Wilds is littered with communities that were named after the post offices that stood there.

In anticipation of the creation of his town, Calder began manufacturing bricks with the company and town name on them. Each brick was stamped with the “Penn Block” company name, and “Calder, PA” as the location.

And then it all fell through when the post office application was denied, and the town of Calder was never established. Which also left the manufacturer with an enormous load of bricks, all stating the name of this non-existent town.

The first thing that the company did was to change the wording on the bricks to “Penn Block, Cameron, PA.” The company still owned the “Calder” bricks when they went out of business in 1920, and a bank in Emporium bought them all and sold them at a huge discount.

Some of the bricks were used as fill for a nearby airport. Many of them made their way to Lock Haven, due to William Rathgeber, city councilman. Rathgeber, a local insurance salesman, had family in the banking business, and he got a deal on many of the bricks. City council used some of them as fill underneath some of the sidewalks in Lock Haven, so the bricks are underneath a part of the I-80 Frontier, buried and invisible. Rathgeber also owned the house on the corner of South Fairview and Linden Streets, and he used some of the bricks to construct a nice brick sidewalk on his property. Never mind that they referenced a community that had never actually existed.

That’s the story of how a bit of Cameron County was shipped to Clinton County, and still exists there to this day. And today, as I write about it, I’m sitting in a house in the I-80 Frontier…. But there’s a little piece of Elk Country right down the street from me, on the corner, still visible a hundred years later. 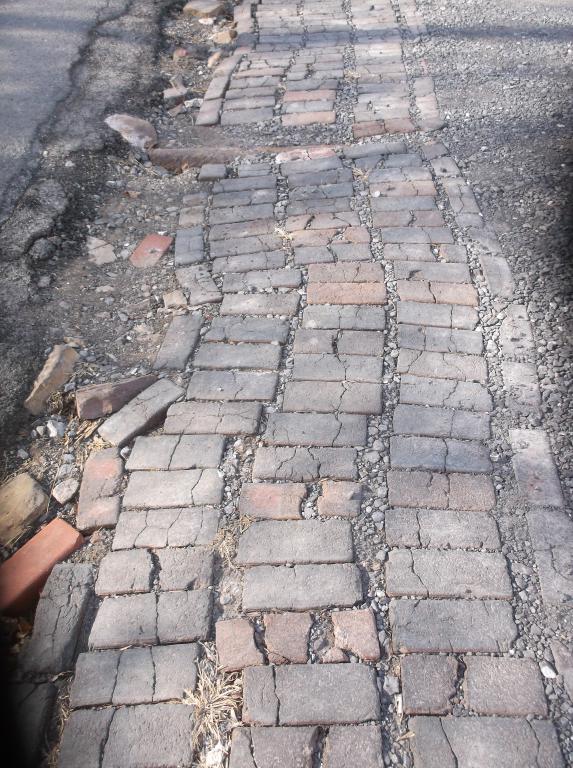