Holly is a beloved Christmas tradition with its shiny, spiny, green leaves and crimson berries that brighten the holidays in wreaths, mantles and Christmas carols.

There are many holly species native to Pennsylvania, however most are deciduous, not evergreen. American holly (Ilex opaca) sports the iconic spiky evergreen leaves and red berries through the winter. Winterberry holly (Ilex verticillata) is not evergreen but a smaller deciduous shrub, also with red berries.

Both hollies are great landscaping choices with beautiful berries that add interest in winter, while providing food for birds and small mammals (but they are poisonous to humans, if eaten). All hollies have either red or black berries.

Hollies are found throughout the world and many cultures have traditions, myths, and legends associated with them. In druid legends, the holly tree presided over the year from autumn to spring equinox. In Celtic traditions, the Holly King (a woodsy version of Santa) defeats the Oak King to rule the dark half of the year. The Romans associated holly with the god Saturn and honored him with a raucous winter festival, Saturnalia, decorated with holly. Despite the tradition, holly represented life amid winter and hope for rebirth.

Over time, these traditions took on Christian symbolism and became associated with Christmas. In Victorian England, holly became such a common Christmas decoration that it was called “Christmas tree.”

British and European settlers brought their myths and traditions from home to the New World. Settlers familiar with English holly (Ilex aquifolium) transferred beliefs and superstitions onto its American cousin (I. opaca). Sprigs and twigs were used for decorations and good luck, but superstitions existed about cutting down holly trees—inviting bad spirits and visitations by goblins.

Holly was a favorite of Colonial America. George Washington mentions in his diaries unsuccessfully transplanting saplings from the woods. Others he received as berries from his brother, and small trees from General Robert E. Lee’s father, both of which he planted at Mt. Vernon. 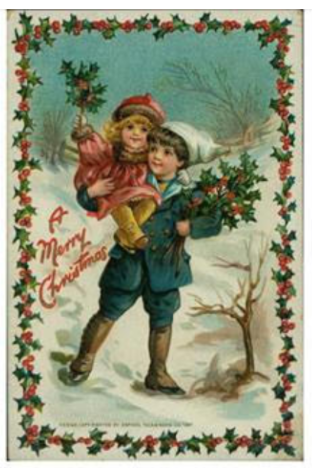 In the past, American holly populations declined from over-collecting fruiting branches for décor, one reason why it is threatened in PA. Poaching was also a problem. Now, American holly is commonly cultivated and sold as an ornamental, but can escape cultivation. The wood is harder than black locust but shrinks. The white wood takes on dyes well and is used for decorative work, like black piano keys.

Other PA hollies include Inkberry (Ilex glabra), a spikeless evergreen holly with black berries, now extirpated in PA. Catberry (I. mucronata) grows in moist, rocky woods in the north, and has red berries. Smooth winterberry (I. laevigata) grows in swamps and shores in eastern PA and produces red berries that attract birds in September. Mountain holly (I. montana) grows in cool, moist, rocky northern woods and higher elevations along the Allegheny front.

Hollies have either male or female (called dioecious) flowers on the entire plant. So, if you plant hollies in your backyard and want to see berries, be sure you plant both male and female. Many cultivars of holly species exist. All hollies are good for attracting pollinators and birds. The tiny, white flowers won’t wow you, but they will make up for it in winter. And, you can use some of your own to deck your halls!

Rebecca Bowen is the Conservation Science and Ecological Resources Division Chief in the Pennsylvania Department of Conservation and Natural Resources’ Bureau of Forestry.  She received her Bachelors of Science from Frostburg University in Maryland where she studied biology and writing, and her Masters of Science for ecology at Shippensburg University.  She is keenly interested in native plant conservation, the natural history of the eastern US and tying that together with art and writing.  Rebecca resides in Carlisle with her husband, dog and cat. This article was originally written for Forest Fridays, a weekly Bureau of Forestry e-newsletter.