Usually, there’s nothing unexplained about the dark. It happens every night, usually between 8 and 10 p.m., depending on the season. But on September 24, 1950, sixty-nine years ago today, it happened far too early—in the early afternoon, to be specific. And it was a mystery, one that covered the Pennsylvania Wilds in darkness.

It began at about 3 p.m. The sky began to go dark all across the Pennsylvania Wilds, gradually but quickly. By four in the afternoon, it could have been midnight.

Robert Lyman of Potter County wrote about the incident in his book “Amazing Indeed.” He reported,”It became darker and darker as impenetrable clouds blanketed the sky…. As the black cloud mass churned and tumbled, weird lights colored the sky green, orange and red, yellow and blue. It was an amazing phenomenon of awesome beauty.”

The lights soon faded, leaving a deep darkness. Phone lines in Coudersport jammed, with people calling one another and trying to figure out what was going on. It seemed the Dark Skies Landscape was shockingly literal at that time too, but this was during the day. Speculation involved UFOs, clouds from a forest fire, an eclipse, or the Russians dropping an atomic bomb. There was also a collateral theory, that the government was testing something to block the view of the Russian because, as everyone knows, Coudersport, Pennsylvania would be the first target in a nuclear war.

One woman, who wishes to remain anonymous, was driving from Tioga County to Lycoming County at the time. Seeing the darkness, she later reported,”I thought I was going crazy. It was afternoon, and I had to turn on my headlights!”

A few counties over in Warren, the bomb theory was repeated, as it was the middle of the Cold War. The Warren County people also brought up the forest fire explanation, though a quick search of newspapers revealed no fire that seemed likely to have caused the event. A pilot flying over the area at 25,000 feet reported that he had to use instruments because of the smoke.

In the Cook Forest area, it was reported that nocturnal birds and animals were coming out, while on neighboring farms, chickens went home to roost. Meanwhile, down in Centre County, a local reporter saw the event happening. He made a call to Renovo, and spoke to a reporter there, and together they confirmed that the darkness was that widespread. From at least the I-80 Frontier to Elk Country, the countryside was blanketed in darkness.

In Clinton County, most people retreated into their homes. A little girl on the corner of Main and Grove Streets in Lock Haven sustained minor injuries when she was hit by a passing car that hadn’t turned on its headlights. Meanwhile, down at Piper Airport, local pilots returned to their hangars as the lights dimmed. Fred MacDonald, of All American Airlines, landed his plane full of passengers rather than take the risk of continuing the flight.

One enterprising reporter went to the top of Highland Cemetery to get a look from a higher elevation. A huge cloud covered the area, but to the east and south he reported that he could still see some daylight filtering in.

The phenomenon lasted several hours, finally moving to the north and becoming light again just before nightfall. It then got dark, at the usual hour this time.

The most reasonable explanation was that smoke from a large Canadian forest fire had blocked out the sun. However, plenty of people still believed in the theories of government experiments, UFOs, or other strange phenomena.

For an afternoon, this event united the people of the Pennsylvania Wilds. It was something that everyone got to experience together…. Admittedly, in the dark. 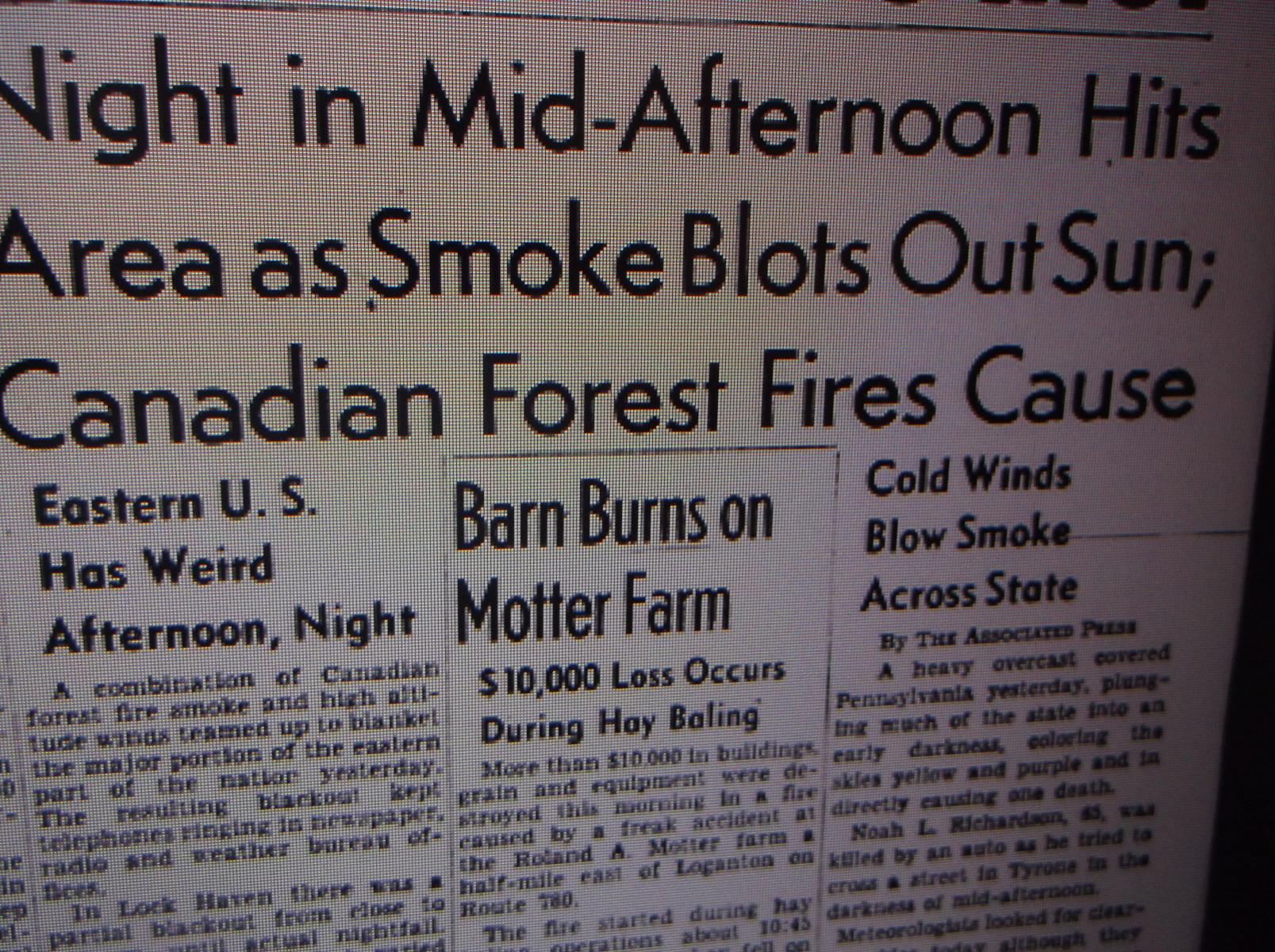