In Potter County, in the heart of the Pennsylvania Wilds Dark Skies, there’s this cemetery. It lies near the line of Roulette and Clara Townships, along Fishing Creek Road. It’s known as the Fishing Creek or Durward Cemetery, and it’s not too outstanding. You’d drive right past without noticing, most of the time.

Unless you saw the ghost.

According to Robert Lyman’s book “Amazing Indeed: Strange Events In The Black Forest,” that stretch of road is haunted by the ghost of a soldier, and he’s still trying to preserve his boots, even though technically he doesn’t need them anymore.

This story isn’t just rumor. So often, with ghost stories, it’s something unverifiable: The ghost of a semi-anonymous young girl (almost always named Mary or Sarah) who died in any number of ways, with no official date of death. This one isn’t like that; this one actually has a verifiable history.

The man’s name was Amandon Baker.

He was born in 1832 across the border, in Andover, New York. In 1864, he mustered into the Civil War and fought with Company I, 16th New York Cavalry Regiment. Baker left the military on June 5th, 1865, and returned home. He was living in Roulette, Potter County, at the time of his death on November 9, 1889, at age 57. He was buried in the Durward Cemetery.

Soon after that, the sightings began.

The earliest stories seem to be documented about a year after he died, sometime in 1890. The first reported sighting, according to the story, was by a local man named Willis Tauscher. Tauscher, at the time 35, was walking along the road one night near the cemetery. He saw a man ahead, walking and carrying a pair of boots. Tauscher called out to the man, who didn’t respond.

The man walked ahead, not giving any indication he was noticing anything else, until he turned, walked into the cemetery, strolled to the grave, and disappeared. 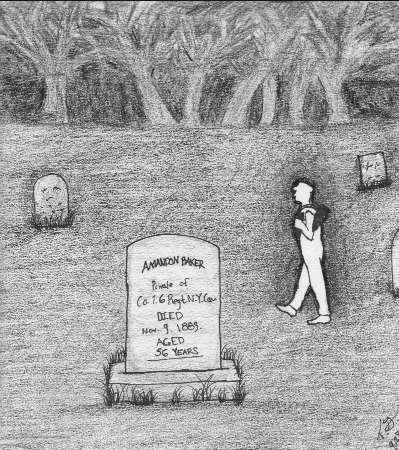 Tauscher said that he recognized the man. It was Amandon Baker.

After that, other people began to witness the ghost, as well. Amandon Baker, always walking near the cemetery, always carrying his boots.

It was the boots that were truly the giveaway. In the Civil War, footwear could be expensive and hard to come by. Many of the soldiers tried to make it last as long as possible, which included taking it off and carrying it with them sometimes. Amandon, who continued to wear leather boots long after he’d returned from the war, seemed to have taken the lesson a bit too much to heart, carrying his boots around throughout the afterlife.

There seems to be no mention of how his wife felt about these sightings. Or his 11 children, who still lived in the area. His wife, Melinda, was still living at the time his ghost began to appear, and she finally passed away a couple of years later, in 1892.

The road is very dark at night, as you’d expect up in the Dark Skies landscape. And it’s been almost a hundred and thirty years since the death of Amandon Baker. But perhaps he’s still there. Maybe he’s walking down the dark country road, still haunting the area. If you happen to be driving through there late at night, watch for a solitary man along the road… Still carrying his boots.