When rats are mentioned, ordinary people typically cringe. Often associated with dirt, squalor, and disease, Norway (or common) rats (Rattus norvegicus) don’t belong here and arrived in North America via sailing ships of explorers from long ago. But there is a rat species that does belong here, and dare I say, they are quite cute!

Allegheny woodrats (Neotoma magister) have been present in Pennsylvania for millennia, occupying rocky outcrops along ridgetops and boulder fields throughout the Appalachians and Allegheny Plateau. Despite exploring Penn’s Woods for over 30 years, I’ve yet to encounter one. 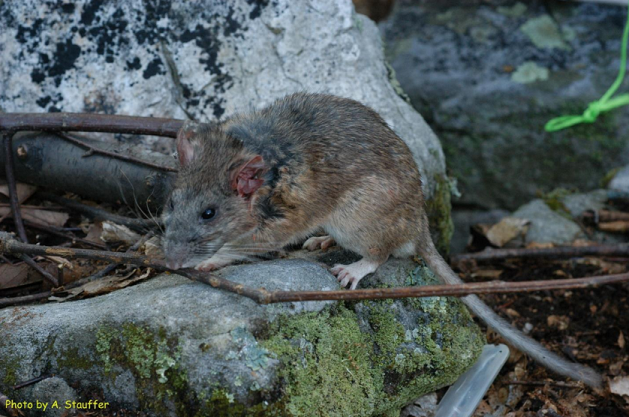 Allegheny woodrats are packrats and differ from common rats by having larger eyes and ears, furry tails, and longer whiskers. Their solitary lifestyle, forested habitat, and proclivity for collecting shiny objects (e.g. spent shell cases and candy wrappers) further differentiates them from their reviled counterparts.

Unfortunately, numbers of these secretive, handsome mammals have been falling over the last few decades, troubling wildlife professionals and spurring considerable research. Not surprisingly, state forests have been shown to harbor viable populations of this PA-threatened mammal, further underscoring the need for conservation of contiguous forest.

Deforestation, forest fragmentation, and invasive forest pests that destroy mast-producing trees are all likely responsible for their dwindling population. Other factors that could be blamed are increased predator numbers, competition from the growing number of porcupines, and proliferation of raccoon roundworms (an internal parasite).

It is hoped that active research and conservation measures can positively impact this imperiled denizen of our forests, and DCNR is a proud participant in this effort. It is hard to imagine an animal more symbolic of the spirit of Pennsylvania’s wilderness, carving out an honest living in the harshest terrain in the state. Their presence testifies to the indomitable spirit of life and adaptation, hardiness, and understated beauty.

I hope the Allegheny woodrat continues to hold its place in our state’s rich natural heritage, and that someday, on some random forest jaunt, our paths will cross.

For more information about the Allegheny woodrat, click here.

Allegheny woodrat and baited suet (photo by A. Stauffer) 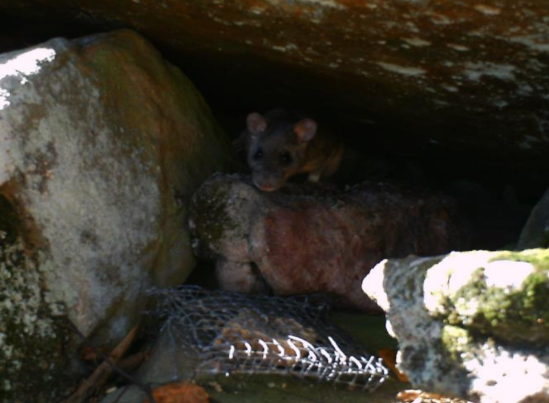 Ryan Reed is an Environmental Education Specialist in the Department of Conservation and Natural Resources, Bureau of Forestry.  He possesses degrees in Wildlife and Fisheries Science and Wildlife Technology, while currently pursuing a master’s degree in Environmental Pollution Control.  He has also worked for the Pennsylvania Game Commission, and taught high school sciences for 11 years.  He is especially interested in biodiversity and ecology.  A lifelong hunting and fishing enthusiast, Ryan resides in Harrisburg, PA. This article was originally written for the Bureau of Forestry’s “Forest Fridays” e-newsletter.